Its prospect update time! Below find statistical updates for Devils prospects playing in the AHL, ECHL, CHL and NCAA, and a look at the depth in the AHL and feeder leagues right now and how that might impact potential acquisitions via NCAA free agency. 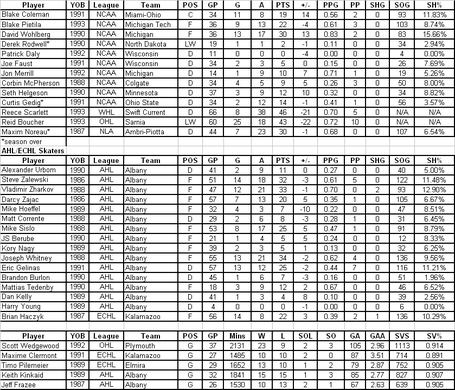 It's that fun time of the year for me and others who follow college hockey. As the regular season winds to a close and teams start to be eliminated from Frozen Four eligibility, top college players who previously went undrafted (and are not draft eligible in 2012), start signing Entry-Level-Contracts with NHL clubs. Typically most of the players signed are seniors who have exhausted their eligibility, but sometimes you do have underclassmen who are signed after the completion of the year.

If the Devils are planning on being active in signing college free agents only the amateur scouts know for sure who they are looking at. Before I speculate on some potential targets I think a quick look at the depth of the AHL/Prospect pool can guide us on the type of player they may want. 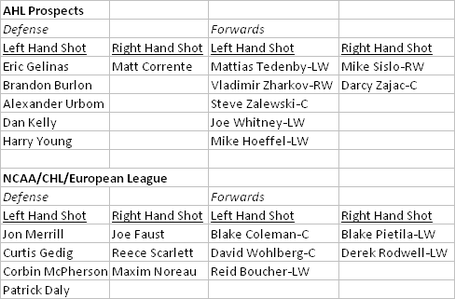 With the addition of Corbin McPherson (graduation) and possibly Jon Merrill to the AHL team next season I am going to guess that the Devils scouting staff might be focusing more on acquiring a forward or two as opposed to a defenseman. That's not to say they won't sign a defenseman, but rather that the goal might be to restock the system depth at forward.

Here are some players the Devils might be looking at:

The Devils have the habit (as some other teams do) of bringing aboard the brothers of players. Recent examples include Darcy Zajac, Stephen Gionta, Jordan Parise, etc. Kelly, a standout at Union College, might be the next one to join this group. Having played in the prospects camp last year, the Devils have already got an extensive look at Kelly and it would surprise me if wasn't offered a contract (either NHL or AHL) by the Devils organization. He can add a solid playmaking element to the offensively starved Albany team.

Abbott is one of the leading candidates to win the Hobey Baker Award and according to Toronto GM Brian Burke 'the smartest player in college hockey'.The 5'10" (listed) forward has a highlight video available here that shows his good hands and playmaking ability.

Zengerle played out his BCHL eligibility (averaging 2 pts per game as a 19 year old) and has carried over his success to Wisconsin . The 22-year-old sophomore is Wisconsin 's highest scorer and is almost a lock for WCHA first team honors playing on an underachieving Badger team. The question for him becomes whether or not he wants to forego his last two years of college eligibility to take a shot at one of the inevitable contract offers coming his way.

It won't be easy to pry Brown away from UMD as he has two more seasons of college eligibilty left. Brown, who has attended Minnesota Wild prospect camps, was one of the best freshman in the nation and helped position Chico Resch's alma mater to the Frozen Four championship. A bit on the smaller side (listed as 5’10”-170 lbs) Brown offers good hands and skating ability.

The only defenseman on my list is here because despite his size (5'9”-180 lbs) he has been a two year captain (elected before his sophomore year) of the Spartans and shared the lead for CCHA scoring during conference play with 29 points.