Part of the struggle I have in looking at the Devils prospects is not being overly optimistic about their futures. With that in mind, I didn't want to get that excited about the future of Eric Gelinas even as he continued to pile up goals in the AHL, but it's hard not to. Gelinas, a 2009 second round pick of the Devils, scored his 16th goal on Wednesday which leads all AHL defensemen.

16 goals is impressive for an AHL rookie, let alone a defenseman, and I wanted to know how he was scoring. The stat sheets tell you that 8 of his goals were on the power play, but that’s not much information. After the jump I present available video on the goals he has scored and look back on his QMJHL stats to see if this type of production was expected and if his rate of goal scoring is sustainable.

We can ascertain a few things viewing his goals. He has a good, quick shot that finds its way through traffic to get to the net. I don't necessarily see a very hard shot, but again with a quick release you can make up for a shot that doesn't have a great velocity. He also seems to skate well and that allows him to quickly join the rush when an odd man situation presents itself. His opportunism, which also speaks to his hockey sense, has helped him capitalize on plays that have broken down, especially on the power play.

OK, now let’s take a look at some of his statistics from the AHL and QMJHL to see if his current production is in line with what he has accomplished previously. 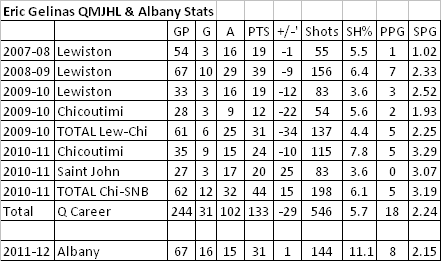 First let's look at his shot totals. Gelinas currently has taken 144 shots this season, averaging 2.15 per game. In the QMJHL when you look at the average of his junior career, he was at 2.24, so he is shooting at what seems to be a similar rate to what he did while in the QMJHL. Some may want to point to his final year of junior plays as the best indicator of his production potential in the AHL/NHL, but I prefer to look at his entire career as opposed to just his best statistical year.

Ideally you want to see that shot total number a bit higher for a 'offensive-defenseman', although I put some of the fault on the players in front of him trying to drive play and keep the puck in the offensive zone. I think if Gelinas played with a better crop of forwards in it would give him a better opportunity, especially at even strength, to put shots on net.

Now if you look at his stats, note that his highest goal total was 12 and that was last year. So what’s changed? He is shooting at 11.1 percent, which is very good for a defenseman, but not common. The 11.1 percentage has almost doubled from his career QMJHL shooting percentage.

To put some context behind his current shooting percentage, there are two NHL defensemen Nicklas Kronwall of (11.5) and Jason Garrison of (10.1) who are shooting at that rate. In the AHL only Brendan Smith of (11.1) and TJ Brennan of (10.1) had about 100 shots and a shooting percentage of more than 10 percent.

I hate to be a downer when a prospect is doing so well, but I have to believe that it will be very hard for Gelinas to duplicate this type of production in subsequent AHL/NHL years, unless he is able to get more shots on net.

This means that it’s likely we will see a drop in goal production from Gelinas next year. But understand, that doesn’t mean he isn’t doing well. It just means he has been lucky, and luck is often the result of hard work. Also, based on his shot output and assuming he might have a 6-8 percent shooting percentage and that he doesn’t increase his shot totals, Gelinas is roughly a 10 goal scorer right now in the AHL. 10 goals for a defenseman at an AHL affiliate of the Devils is an impressive feat in itself.

How impressive? Consider that in the last 7 years only two Albany/Lowell Devils have scored as many as 10 goals: Matt Taormina in 2009-10 and Dan McGillis in 2006-07. was playing in his first season after he graduated college and McGillis was a seasoned NHL veteran.

Gelinas has a bright future ahead of him. That said, let's not delude ourselves into thinking he is the next Erik Karlsson. As fans it’s important that we don’t place unrealistic expectations on prospects, especially if they are based on statistics that aren’t likely to continue.

That's it for this week; please leave any Gelinas related questions or comments below. Thanks for reading and sound off below!