Share All sharing options for: The Minor Penalties Taken by the 2011-12 New Jersey Devils Skaters (So Far)

As the playoffs loom in the near distance, every mistake gets magnified - especially if it leads to a goal against. Penalties are often very obvious errors. They are plays that break the rules and usually put the team down a man. While the best power plays tend to convert only 20-25% of the time, it's not an advantage you want to hand to an opponent in most games, much less in critical games where a loss could end a team's season. The emotions rise as fast as the stakes in the postseason, which makes the need for discipline - to keep those emotions under some control - even larger than usual. There may be the odd situation where fouling an opponent is a respectable play, such as when it prevents the other team from scoring. Usually, though, they're not smart plays. They are essentially mistakes.

As the Devils faithful look forward to the return of the team to the playoffs, they want to see the team do something beyond the second week of April. That means they'll have to cut down on whatever mistakes they can make. Mistakes involving puck movement, defensive positioning, and match-ups abound, but penalties always lurk as an issue. As a fan, I find myself hoping that a player doesn't cross the line of what a ref will allow or just have a lapse and let his body/stick do something reckless. While the Devils have an excellent penalty kill and they're not a terribly undisciplined team, they are not invincible. And it can take only one or two successful power plays to decide a game. That's big enough in the regular season, and it's massive in the playoffs.

Last week, I provided an updated list of who on the New Jersey Devils have been taking and drawing penalties in 5-on-5 situations in this season. Obviously, we want those who are taking more calls to take it down a notch (e.g. Anton Volchenkov, David Clarkson) while wanting those players drawing calls to keep doing what it is they do to get them (e.g. Zach Parise, Clarkson). That benefits the team even if the Devils power play struggles. Today, I want to go deeper into the penalties themselves. Thanks to the split stats for players at NHL.com, I've compiled a list of each type of penalty every Devil has taken this season. including those no longer on the team. I want to find out if there's a kind of penalty or penalties that the team keeps taking. In addition, I want to know how many of those calls each player is taking. Please continue on after the jump to find out the results.

With respect to penalties, I'm only looking at minor penalties. Those are the calls that can result in penalty kills or less than 5-on-5 situations. There were only three non-fighting majors issued to the team this season, all for boarding. Those majors were given to Kurtis Foster, Dainius Zubrus, and David Clarkson at different points of the season.

Also, I'm unconcerned with any penalties Martin Brodeur (only one for that stupid trapezoid rule) and Johan Hedberg (only one for a clearance over the glass) have taken. With only two minors between both, I don't think they'll blow up with PIMs in the playoffs.

Lastly, all penalty information was collected prior to the Chicago game last night. 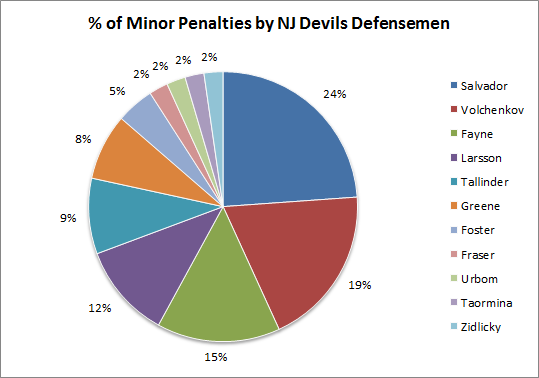 Bryce Salvador and Anton Volchenkov lead the way for minors for the Devils defensemen. Strangely, there were separate listings for delay of game and delay of game - puck over glass, so I listed both as different categories. All the same, Salvador led the Devils defensemen in both. He also had an extra roughing call and two more cross-checking calls than anyone else. Volchenkov loves to throw the body around but fortunately only got tagged for one roughing call, one boarding call, and no elbowing or charging calls. Unfortunately, he has a tendency to take players out at the legs with six tripping calls.

Both Salvador and Volchenkov have a notable amount of interference calls too, but the leader among defensemen is the rookie Adam Larsson. It's good that he hasn't been taking too many more. Racking up only ten minors by a rookie defenseman is good by itself, especially with his recent struggles. It means he's not cheating so much (or he's really good at it) when beaten. At the same time, this shows that he has some work to do if he's been repeatedly caught hitting guys away from the play.

The rest of the blueline is a mix of everything else. Mark Fayne has his share but he doesn't stick out too much with any one kind of foul. Henrik Tallinder and Andy Greene are the same way, though their totals are lowered by the fact that they've been injured for significant portions of the season. Kurtis Foster and Marek Zidlicky have only been Devils for part of the season and they haven't been penalty liabilities with the team. Mark Fraser only played a little bit but he managed to pick up more boarding calls than anyone else still on the team. Overall, the blueline has been tagged for 88 minor penalties this season and the mostly healthy, regularly-playing four of Salvador, Volchenkov, Fayne, and Larsson lead the way. Those four alone represent approximately 69.32% of all penalties by Devils defensemen this season. Just as I pointed out last week, if Salvador and Volchenkov can improve their discipline, that alone would be a big help. 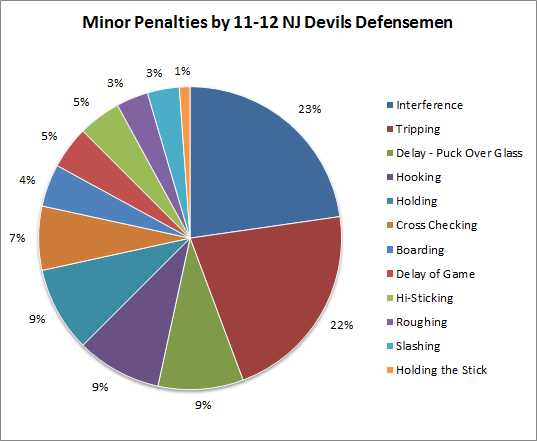 As for the penalties themselves, we've got a restraining foul and a hitting foul right at the top. Interference leads the way with 20 total calls with tripping right behind at 19. Interestingly, those two calls have been made against the defense more so than any other. Even if you combine the delay of game listings, they don't come close to the tripping or interference calls. It's heartening to know that this team isn't getting tagged for a lot of hooks, holds, and slashes as they play their game. It's equally pleasing to find out that the defense aren't so dangerous with their checks that they haven't taken a lot of boarding, cross-checking, or roughing calls. Still, the two at the top are concerning. The blueline in general definitely needs to be more mindful about when and where they throw a check as to not get called for interference. While they're not getting sticks up high or on the hands or body, they've been caught with them at opposing players' feet. If the Devils can be more aware there, that would also be a big plus. 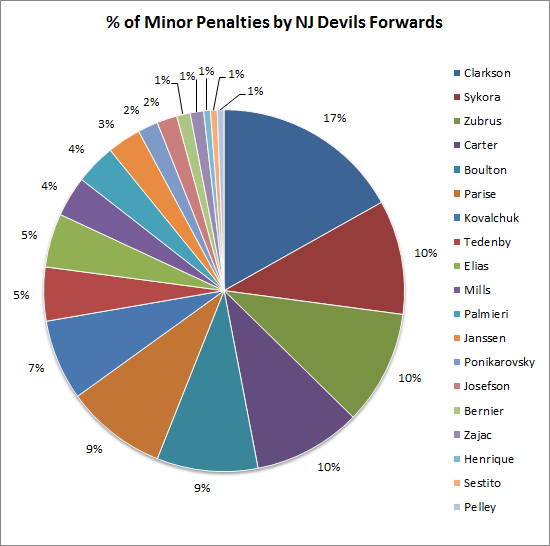 With more forwards and at least a few "gritty" guys on the roster, it's understandable that the forwards would take more calls. What shocked me was who was involved. OK, Clarkson leading the way was no shock. We already knew he's a physical guy that takes and draws more calls at even strength than anyone else on the team. What I didn't know was that Petr Sykora and Zubrus have taken more minors than Ryan Carter and Eric Boulton. I didn't expect Mr. Energy Source Tim Sestito to only have one penalty. It was jarring at first that Ilya Kovalchuk or Patrik Elias had so many more minors than Cam Janssen. Though, after a second thought, it makes total sense since they play a lot more than Janssen and can actually keep up with his competition. What I definitely didn't expect that Zach Parise would lead the team with eight tripping calls. Maybe he deserves the nickname "Trips Ahoy?"

Anyway, Clarkson's definitely the heavy PIM machine on the team. He's the forward's (and team) leader in roughing, interference (tied with Larsson), and unsportsmanlike conduct calls. That makes me wish for him to take down the intensity and the verbals down a few notches in future games. When the intensity ramps up in the playoffs, I hope #23 can keep his cool. As he's too important to the offense's depth to be sitting in a penalty box. I'd like to see Sykora and Zubrus watch their sticks more since they represent the majority of penalties they've taken. In fact, that may be good advice since tripping is the most popular penalty among them and hooking and hi-sticks are third and fourth, respectively. Roughing is also up there, so it could also benefit if the forwards listened to the defensemen about keeping themselves in check. 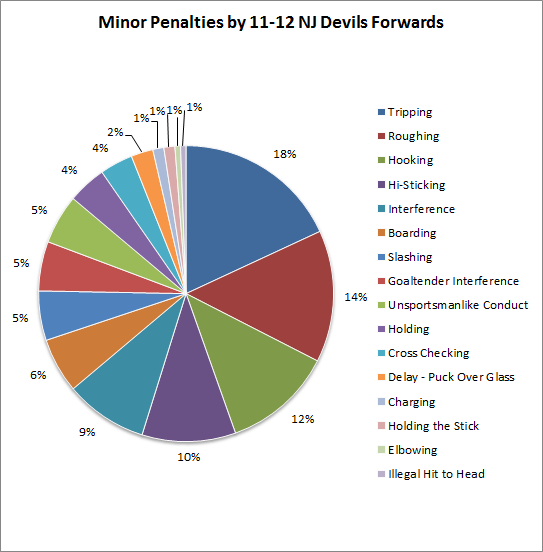 Interestingly, the forwards also managed to compile a larger range of penalties. New to this chart is unsportsmanlike conduct, goaltender interference, charging, elbowing, and even a Rule 48 call for a hit to the head. Only the first two on that list were somewhat prolific at nine a piece. Again, with more players involved and those players serving different roles (e.g. goons, "energy guys"), perhaps a wider range should be expected. Still, the top five make up a majority of calls so if the coaching staff wants to address any discipline issues, they should look at those first.

At the end, I think these charts and graphs paint a more worrisome picture than is necessary at first glance. Those players no longer up with New Jersey or even in the organization won't be a factor in about two weeks. They definitely make the chart and list of penalties larger for both forwards and defensemen. I do not think we need to worry about the seventh/eighth defenseman or the two goons (Eric Boulton or Cam Janssen) getting into penalty trouble since they won't likely see the ice in the playoffs.

The main concerns are justified, though. The same veteran regulars pointed out in the last post on taking penalties are the ones who need to be the most careful. In terms of the type of fouls, the defense needs to be more aware of when they can hit an opponent. The forwards need to be careful when "crossing the line" with physical play and getting their sticks up on an opposing player's hand or body to get them off the puck. All skaters on the Devils can benefit by not leaving the stick out or lunging and catching a guy's legs to take them down. I can't explain why tripping is so popular for this team; but it is. Therefore, that needs to be addressed ahead of the playoffs.

That's my take on which Devils take certain penalties, now I want to know your conclusions after reading this post. Why do you think the Devils defense and forwards are guilty of so many tripping calls? What about the interference calls for defenders? What about the roughing and hooking calls for forwards? Are there any penalties that you expected players to take, such as more physical fouls by defensive defensemen? Are you more concerned about certain players taking penalties as the playoffs continue? What do you think the Devils should do about the penalties they take, if anything? Please leave your answers and other penalty-related thoughts about this season's Devils team in the comments. Thank you for reading.