Its prospect update time and below you will find statistical updates for Devils prospects playing in the AHL, ECHL, CHL and NCAA. We also take a look at how goaltenders have been drafted over the past few years and a look at the number of current NHL goaltenders that came from the draft and which feeder league they came from. 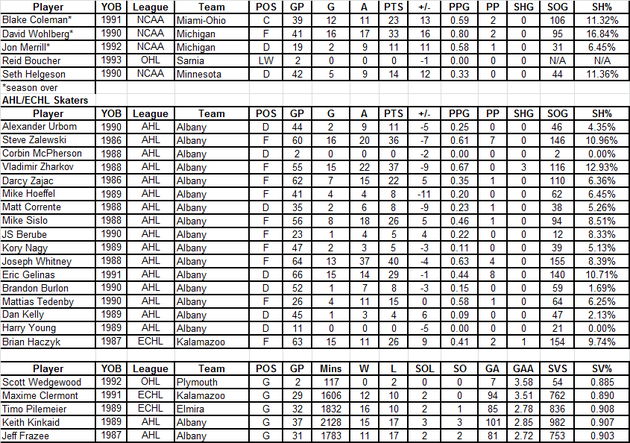 (Note that with Wedgewood and Boucher I am now relaying their OHL playoff stats above.)

Drafting Goalies & Where Current NHL Goalies Are Coming From:

Last week, I looked at what goalies were paid, the relation of that to the team's monetary expenditures and the goaltending depth of each team. This week I wanted to take a step back and see how many goalies were being selected in the draft and out of those selected when they were selected and which feeder league (NCAA, CHL, etc) they came from.

Looking back to 1995 teams used to draft goaltenders at a much higher rate than they once did. There are a few reasons for this, most notably the changes to the draft/roster limitations post-lockout. Post-lockout CBA rules changed the draft from nine rounds to seven rounds and capped teams to limitations on the number of players they could have on their reserve lists. This meant fewer teams took fliers on goaltenders late in the draft. As evidenced below sometimes 8/9 goalies were selected in the 8th/9th round of drafts prior to 2005.

In the table above I also included the average or percentage of teams that drafted a goaltender in the draft. In the early part of the prior decade almost every team took a goalie, if not two. Post lockout that percentage has dropped to roughly 60%-70% of teams selecting goalies.

Taking goalies in the first round has also slowed. In the past five years only four goalies have been selected in the first round of the entry draft. Compared to past years, it seems teams are beginning to realize that there is more value in looking for forwards/defenseman than taking a flier on a goalie, a challenging position to scout. The Edmonton Journal's Jonathan Willis wrote recently about why drafting goalies early is bad idea, noted that in his opinion no one should pick goalies within the first 100 picks. It's a position many hockey pundits share.

While I agree that taking a goalie in the first round is something I probably wouldn't do if I was in charge of a franchise, I also think waiting until the fourth round to take one, might be a bit too late.

Earlier this winter, I had looked at NHL.com and looked at the NHL level goaltenders each team was using Out of the 56 goalies used by NHL teams (I omitted some that I felt weren't worth mentioning. Sorry, Alex Auld and a few others) 48 of those goaltenders where selected in the draft, 16 of them in the first round.

Two items/takeaways that I found interesting and that I will be exploring further in subsequent posts:

The number of goalies that have originated from overseas.

The Q having the most number of active goaltenders out of the three CHL leagues.

I think it's helpful to look at information like this when assessing where the next Devils starting goaltender may come from. We all rate Scott Wedgewood highly, but he has struggled at times and is not sure thing moving forward.

Currently the Devils have a mixed bag of prospects that are in line to succeed Martin Brodeur. Some have been high draft picks (Frazee, Wedgewood), low draft picks (Clermont) and some have been recruiting via amateur free agency (Kinkaid). I think the key to finding that replacement is spreading out the pool of talent available. That might mean the drafting of another goaltender in the early rounds to supplement the other assets in the organization.

The ramifications of the Michigan loss are of interest right now. Wohlberg, a senior, has graduated Michigan and will likely join Albany for a few games before their season closes. Wohlberg was playing wing for most of this season and was recently moved back to center for the Wolverines. (Note that as I publish this, it's just been reported by the twitter feed of the Albany Devils that Wohlberg has signed an Amateur Try Out (ATO) contract with Albany. He will likely sign an entry level contract with New Jersey, set to begin for the 2012-13 season, shortly.)

Merrill on the other hand has two years of eligibility left at Michigan. After dealing with off the ice issues early in the season Merrill worked back into the good graces of the Michigan program and rejoined the team in January. Everyone said the right things about Merrill's return, but he now finds himself faced with the possibility of signing a contract with the Devils and joining the organization or returning to Michigan. My gut tells me that Merrill is signed to an entry level contract by the Devils within the week, and that he gets some games at Albany before their season concludes.

(Note that the CHL is not an option for Merrill at this point. Since he has not played in the CHL prior turning 20 he is ineligible to play there next year).

Running into the buzz saw: Over the weekend the playoff hopes of the Albany Devils were badly hurt. Playing in a weekend series against the Norfolk Admirals (Tampa Bay Lightning AHL affiliate) who had won 18 games in a row (AHL record) Albany lost both weekend games.

The Good: Albany has 67 points and is only 4 points behind the 8th seed in the AHL's Eastern Conference and 7 of their last 9 games are at home.

The Bad: They are currently 14th in the conference, and only have games on hand against two of the six teams they are battling against for the final AHL playoff spots.

At this point, unless they get hot, Albany seems likely to fall short of a playoff spot. The AHL Playoff Primer link is here if anyone wants to look at this further.