Penalties and the New Jersey Devils: Who's Drawing Calls and Getting Called

Share All sharing options for: Penalties and the New Jersey Devils: Who's Drawing Calls and Getting Called

Kevin had a very good post yesterday about how the New Jersey Devils pick up largely useless goons enforcers and add them to their roster. In between that and Monday's 4-2 loss to the Rangers where Devils penalties directly contributed to the loss, I've got PIM on my mind. No, penalties are not the biggest issue surrounding the Devils. That would be shot generation. But since I and many others have been banging on about how the Devils need to shoot more and move the puck better so they can get to shooting, I want to talk about penalties instead.

The Devils have one of the best penalty killing units in the NHL. They've been very successful with a success rate over 89%. It's not all just good fortune; the Devils have one of the lowest SA/60 rates in 4-on-5 situations in the NHL at 42.7. Still, the Devils have not been a relatively disciplined team this season. They've been shorthanded 238 times this season, the sixteenth most in the NHL. While that's not terrible, they're no longer among the least shorthanded teams in the season. Even if the Devils kill the penalties and it's not uncommon for them to get an offensive rush or two out of the kill, it's still time where the Devils are largely defending and the opposition can get some strong possession.

On the flipside, the Devils aren't dead last in power play opportunities either. They're seventeenth in the NHL with 239 opportunities. While the power play hasn't been all that successful or even consistent, it's still time where the Devils can at least prevent the opposition from attacking. It is a good thing when the Devils get a power play; especially since the shorthanded goals against have dried up.

Therefore, I decided to take a look at who's been drawing calls to get the Devils on a man advantage and who's been taking them to put the Devils down a man. I also compiled who's taken penalties overall to determine who's leading the team in PIM per game. It's essentially an update to this post I did in early December about drawing and taking calls. I think you'll be surprised at who's been doing what in this regard should you continue after the jump.

Let's get into who's been drawing and taking calls first. The official play by play log of each game names who took and drew the penalty provided it was a foul against another player. Behind the Net compiles this information for 5-on-5 situations and takes out coinciding calls. This means the following data really points out how many power plays the player has earned and how many penalty kills they caused. Two additional notes apply for this post. First: a player with an asterisk next to their name means they played some of the season with another NHL team. This won't affect Ryan Carter too much, but it definitely does for the numbers associated with Marek Zidlicky and Alexei Ponikarovsky. Second: All numbers are before games played on March 20, so this doesn't include the Ottawa game.

It's a giant chart, so let's start with the most impressive players who look good by this chart. First, there's David Clarkson. He leads the team in both penalties taken and drawn. However, the good news is that he's drawn plenty more penalties than he took. His drawn-taken difference is +9. While he can take some dumb calls at times, he's not a net negative over the whole season. That's a big jump over where he was back in early December when he was at 9 taken and 8 drawn.

Second, the captain looks great in this chart. Zach Parise boasts the best drawn-taken difference on the team at +14. This is indicative of how dangerous Parise has been on the ice. Sure, he's had some quiet games, but opposing players have fouled him quite a bit - possibly because that's all they can do. Should the Devils need to get a power play, they really should look to #9 instead of #23. Parise doesn't take many penalties in his own right.

Third, a rookie really stands out: Adam Henrique. He's almost like Brandon Sutter from a few years ago where he has drawn a considerable number of calls without taking any at 5-on-5. That's really impressive on it's own. That feeling gets multiplied when you consider that he's still relatively new to the NHL. If he was ever beaten by the speed of the game or through a bad decision, and he has at times this season, then Henrique has simply kept his cool. He has maintained his discipline such that he doesn't lash out and take a silly minor trying to catch up to his target or to cover his error. I don't know if he'll stay spotless for the rest of this season, but he'd have to get extremely reckless to dull the shine of his +11 drawn-taken difference.

Of course, this chart is not all glitter and gold. There are some players here that definitely don't look good. First and foremost, among full-time Devils this season, Bryce Salvador is behind Clarkson in taking penalties with 15. Anton Volchenkov is right behind him at 14. This not a good thing for two reasons. One, they're defensemen. Having a forward go to the box is bad enough, but a defenseman means the blueline takes a bigger hit in personnel. Going from 12 to 11 is easier to manage than from 6 to 5. Two, they're the top defensemen on the penalty kill. When they take a penalty, it really hurts the PK effort because one of them is usually starting the kill. That the PK has succeeded in spite of this is good. That Salvador and Volchenkov are this high up in penalties taken is not. (Similarly, Mark Fayne with 13 taken penalties isn't good as well.)

It surprised me to see Petr Sykora so high up in penalties taken with 13 of his own. For an attacking player, it's a concern that he's not drawing attention and he's getting caught with fouls. His drawn-taken difference is at -7, which is tied with Anton Volchenkov, a fourth liner I'll name later, and just ahead of Ryan Carter - whose numbers are a bit boosted by some games in Florida. The Elias line as a whole hasn't been a positive when it comes to drawing calls with Patrik Elias sitting at 6 and 6 respectively and Dainius Zubrus is only a slight negative at 12 taken and 10 drawn. Sykora really has dragged them down over this whole season.

Then, there's the fourth line of sadness. Surprising to me, Cam Janssen is only at 5 penalties taken and 2 drawn. I suppose when your ice time is limited to less than five minutes per game and your role is just to "enforce," it's hard to get called for minors. Especially when you're not able to get in the play at all. Ryan Carter has the lowest drawn-taken difference on the whole team. It's worth nothing that Carter took three penalties with Florida before becoming a Devil. So he has since taken 15 with New Jersey while not coming close to drawing as much. That helps the difference; but it's still a lot for a guy who doesn't even average 10 TOI/60. Eric Boulton has really shown his "worth" in recent games with 10 taken calls and only drawing 3. To think, he was even at one apiece back in December.

It's interesting that despite all of his talent and pace, Ilya Kovalchuk has only drawn 11 calls. He's still a net positive since he's taken only 8, but I actually expected to see a higher number under "drawn." Still, with Parise and Henrique, that threesome is likely the go-to line if the Devils want to get a power play. Given that Parise and Kovalchuk are among the most prolific shooters in the NHL with Henrique distributing, perhaps that line getting fouled shouldn't be such a surprise. Likewise, should DeBoer want to avoid calls, then keeping the fourths off the ice helps. That's definitely not a surprise - and it helps explain why we don't see them for long in most games.

OK, so here's a surprise - Eric Boulton has overtaken David Clarkson in PIM per game with his antics against the Rangers. Here are the numbers from NHL.com: 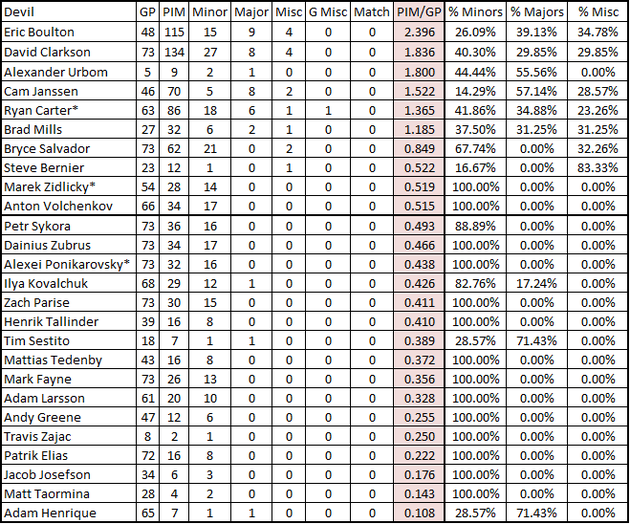 Boulton's 2.396 PIM per game currently puts him in an exclusive statistical club. Only twenty players have spent their entire tenure as Devils while maintaining a PIM per game rate over two since Lou became the GM, CEO, and President of the team. That's right, Boulton has reached the "heights" hit by Scott Daniels, Allen Stewart, Jamie Huscroft, Kryzysztof Oliwa, Pierre-Luc Letourneau-Leblond, and Sasha Lakovic. Of course, all of those mentioned players have at least one point with the Devils. Only Andrew Peters have managed to gone pointless among the twenty. We'll see whether Boulton will stay with him.

Boulton aside, the main culprits are easily seen by the number of minors - which make up the bulk of the PIM for most of the team. Clarkson leads the way, Salvador is the only other Devil with more than 20 minors, and Volchenkov and Zubrus both take third place with 17. Some of these don't end up on the Behind the Net list as they could have been during non 5-on-5 situations or coinciding minors. All the same, it highlights who could stand to take fewer calls. Clarkson's not likely to change what he's about and since he's drawing more calls than taking them, then perhaps it's best for him not to change too much. Though, I definitely want him to take fewer major penalties - he's too important to be in a box for five minutes at a time. In that same vein, I'd like to see Salvador and Volchenkov sharpen up because they're more valuable on the ice than in the box.

What surprised you about the penalties drawn and taken numbers? Who concerns you the most about taking penalties? What do you want to see going forward as the season ends? Will Boulton even match Sasha Lakovic in points? (Note: ("Lack of Skills" got 3 assists in 16 games) Please leave your answers and other penalty-related thoughts about the Devils in the comments. Thank you for reading.