Its It's prospect update time! Below find statistical updates for Devils prospects playing in the AHL, ECHL, CHL and NCAA and a look at goaltender salaries by team. 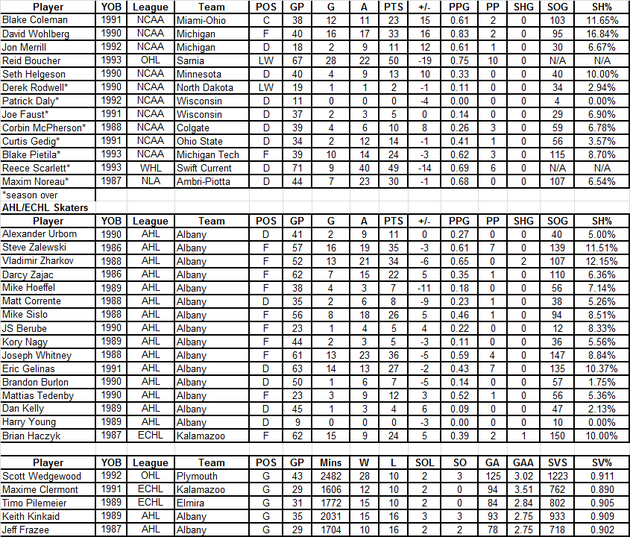 Over the weekend, New Jersey Devils 2010 3rd round pick, Scott Wedgewood, signed his first entry level contract. His signing gives the Devils four goaltenders (Wedgewood, Maxime Clermont, Jeff Frazee, Keith Kinkaid) signed for next season. Unfortunately, not one of the goaltenders currently under contract has any NHL experience. In fact there are only two teams in the NHL, Winnipeg the other, that don’t have an ‘NHL caliber’ goalie signed for next season. (However, Winnipeg’s Ondrej Pavelec is a restricted free agent and will likely return to the club.)

That said, it’s not time to panic yet. Given his recent surge in play, I don’t expect Martin Brodeur to retire after this season and to re-sign with the Devils to a one or two year contract. The question then becomes how much can the Devils pay him. The Devils are in a tough enough spot financially (if you believe the NY Post reports), and probably can’t allocate $5MM-$7MM to the goaltending position. Considering the Devils situation, I was curious to see how teams allocated financial resources to their goaltenders.

In order to get a better sense on how all NHL teams allocate financial resources to the goaltending position, I went through Capgeek.com to generate the data below.

The table shows, by team, the 2011-12 money spent on goaltending, how that money relates to the NHL cap ceiling, 2011-12 actual salaries, how the actual salary relates to a team's cap spending and finally 2012-13 figures for goaltender spending. The 2012-13 percentage figures are based on teams spending the same amount that they did in 2011-12 and does not account for any potential cap increases.

Since the data was there and easily captured, I also added columns for open NHL spots, number of goalies likely under contract next year in each team’s systems and some notes for each team. This may give you a sense of the upcoming market for goaltenders in 2012 free agency or who might attempt to acquire backup goaltenders like Los Angeles’ Jonathan Bernier or Vancouver’s ginger hero Cory Schneider. 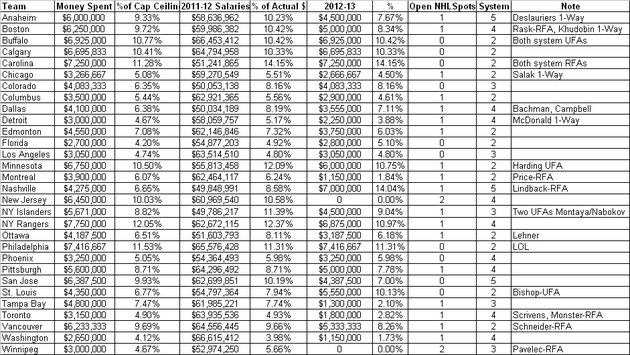 What immediately jumps out at me is that spending a lot on a goalie isn’t always the best recipe for success. Out of 30 NHL teams, 10 allocate more than 10% of their actual salary to the 2 (or in the Islanders case 3) goaltenders on their roster. Out of those 10 teams only 4 of them (Devils, Rangers, Philadelphia, St. Louis) are poised to make the playoffs. Another 2 (Calgary, San Jose) might make it, but they are in a fight to do so.

Not spending a lot doesn’t help either, unless you have some cost controlled ELC contracts to help you out. Teams like Washington, Columbus, and Toronto haven’t chosen to invest a lot into goaltending and it certainly shows. Los Angeles has managed their goalie expenditures well, but after 2012-13 they are going to have to pay Jonathan Quick $6MM-$7MM a year.

Cam Ward is good and I'd love to have him, but as an NHL GM I wouldn’t want to spend 14% of my team’s salary on him.

Looking at next year, I wonder if Nashville, who has Pekka Rinne signed to a $7MM a year contract (14.04% of their team’s probable 2012-13 salary), can really allocate the necessary funds to lock up defensemen Ryan Suter and Shea Weber.

If you fare well in the draft you can ride a goalie through his first contract or two at a manageable level (like Winnipeg has with Pavelec and Montreal with Price) before your goalie spending takes up too much of your cap.

How much is Marty worth?

Combined with a backup that makes less than $1MM per year, the total expenditure by the Devils next year on the goaltending positions should be no more than $4MM. $3MM a year for Brodeur is fair for both sides and gives the Devils some extra money to ink an RFA like Mark Fayne. Assuming that the Devils go for a backup that is already in their system, the total goalie spending for 2012-13 would be less than $4MM. Very manageable.

Daly Leaves Wisconsin: 2011 7th round pick Patrick Daly has left the Wisconsin hockey program to focus on his studies. First reported by Andy Baggot on Twitter, Daly's departure was a surprise to Wisconsin head coach Mike Eaves who was counting on Daly for next year's team.

While I don't question the young man's decision I wonder if his decision changes at all as he goes through his first summer not training for a year of hockey.

McPherson Arrival Immenient: Corbin McPherson's Colgate team lost to Union College (and Kelly Zajac) on Friday in the ECAC semifinals which ended any hope they had at getting into the Frozen Four tournament. Thus, McPherson's college hockey career ends and he should sign an ATO (Amateur Try Out) contract with Albany shortly and we will all finally get to see the 2007 third round pick.

First things first, McPherson will likely sign an ELC (Entry Level Contract) with the Devils to begin in 2012-13. The 6'4" defender will give the struggling Albany blue line the presence it has lacked since Alexander Urbom has been out with an upper body injury. I wouldn't be suprised if McPherson was able to hit the ground running and play a solid 12-15 minutes per night for the A-Devs.

Scarlett Arrival?: 2011 6th round pick Reece Scarlett's Swift Current Broncos of the WHL missed their league's playoffs. Scarlett, being Devils property via the draft, is able to sign an ATO with Albany if the Devils feel he might be an asset to their AHL club. I would be surprised if this happens. Scarlett's played all 71 games with Swift this year and might need a break. Also, considering the jump in speed/physicality of the AHL game both parties might be best served to give Scarlett time to rest up before prospects camp in th summer.

Wedgewood Signs ELC: In a expected move, it was reported by a number of outlets on Friday afternoon, 2010 3rd round draft pick goaltender Scott Wedgewood has signed his first ELC with New Jersey. Don't expect to see Wedgewood until the fall though. His Plymouth Whalers are the #2 seed in the OHL's Eastern Conference Playoffs which start this week and he will likely be playing through the rest of Albany's season.