The Last Devils Game: The Devils hosted the then-super-crazy-hot Pittsburgh Penguins on Saturday for an afternoon affair. The Devils wore their jerseys from the 1980s and early 1990s and promptly played like those teams for most of the game. The Penguins just kicked the Devils around to the tune of 44-14 in shots, which included a 10 minute stretch or so where the Penguins didn't get a shot on net. Martin Brodeur played as well as one could possibly ask - and he got beaten five times. The only real positives for the Devils were that they scored twice, which included Andy Greene's first goal of the season, and no one got hurt. The 5-2 loss to the Penguins really was that bad. Save yourself the time of watching the replay, read my recap of the game, and then do something constructive instead.

The Last Rangers Game: The Rangers played the desperate Colorado Avalanche on Saturday night at MSG and they did the best they could to break the game wide open. They pounded the Avs with shots after shots after shots. Then they put more shots on net. They had 42 shots on net all total. How many went in? One. Mats Zuccarello scored his first goal of the season a little over ten minutes into the first period. After that score, Semyon Varlamov put the team on his back and stopped everything, Matt Hunwick tied it up five minutes after Zuccarello's goal, and Gabriel Landeskog put the team ahead 2-1 in the second period. Paul Stastny iced the game with a power play empty net goal and so the Rangers lost 3-1. Over at the Blueshirt Banter, Bryan Winter recapped the game in this post and Joe Fortunato analyzed the game further in this post.

The Last Devils-Rangers Game: The Devils were coming off a very lackluster and disappointing performance when they hosted the Rangers on March 6, 2012. This game featured a much better result, though it had it's pitfalls. Ilya Kovalchuk was sprung free into the Rangers' end and scored on Henrik Lundqvist early to put the Devils up 1-0. The Rangers responded hard in the second period where they out-shot the Devils 14-7 and tied up the game on a one-timer in the slot by Derek Stepan. Fortunately, there would be no third period blues for New Jersey. David Clarkson (unintentionally) deflected a Petr Sykora shot that fooled Lundqvist to retake the lead at 2:27 into the third period. Just under two minutes later, Ryan Carter finished off a pass from Jacob Josefson in a two-on-one to make it 3-1. Patrik Elias scored an empty net goal to secure a 4-1 victory over Our Hated Rivals. My recap of the game is here. For the opposition's side, Bryan Winters has this recap over at Blueshirt Banter.

The Goal: It has become a common theme in these previews where I say the Devils need to get more shots on net or do a better job moving the puck so they can shoot the puck. That's because we've seen plenty of games within the month alone where the team has struggled to do that, which has made it easier for the other team to beat the Devils. We saw it on March 4 against the Islanders. We saw it on March 13 against the Flyers. We saw just this past Saturday against the Penguins with a 14 shot performance. We even saw it against the Rangers on February 27. It's no secret that the Devils are not prolific at shooting the puck. They're the worst in the league in SF/60 at 25.8 in 5-on-5 situations. They're the in the bottom five in the league in SF/60 at 44.9 in 5-on-4 situations. A team that has Ilya Kovalchuk and Zach Parise bombing pucks mostly regularly still manages games where they don't get to 25 shots total - and it's hurt them quite a bit in recent games. This needs to improve because that paltry of an amount isn't going to get it done against NHL teams with NHL goaltenders and NHL defenses. It needs to be more than just two or three guys leading the way; the whole team has to do a better job at making passes and turning those passes into shooting opportunities. Otherwise, we're going to be disappointed like we were on those other dates.

For additional opinions from the opposition's perspective, please visit Blueshirt Banter. For further thoughts of my own, please continue on after the jump.

Since the Devils and Rangers played each other thirteen days ago, there's not a lot that really needs to be noted about how the Rangers have performed overall. It's more pertinent to look at recent results. These PDO and for-against ratio graphs from Behind the Net shows a recent downward trend. 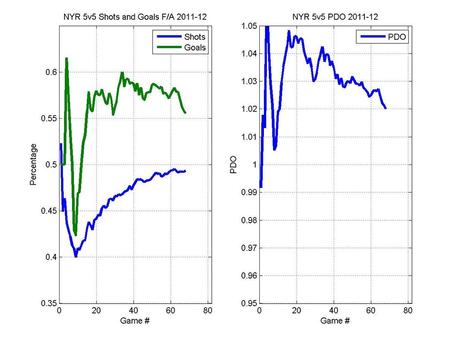 While they're getting close to even in shots; the goal ratio and PDO have experienced a sharp downturn. The Rangers are still rather high in both regards, but it's evident that they're starting to hit some struggles. Henrik Lundqvist is now down to a 93.8% save percentage in even strength and Martin Biron has dropped to 91.2% per the league's stats. I doubt there will be enough time left in the season to allow for a full-on crash-course with the true mean. And Lundqvist is still a dominant goaltender, all things considered. It's just that he and the Rangers aren't as superior as they may have seemed over the past few weeks.

It's because of that drop in performance that the Rangers have went 2-4 since the loss to New Jersey, which has opened the door for a crazy-hot Penguins team to get one point behind them in the standings with the Flyers not standing too far out on the outside with only a three point deficit. Should the Rangers want to secure the Atlantic, then they need results as soon as possible. What better way to start than by getting a win over a hated rival, especially one who handed you a 4-1 loss not too long ago?

This isn't to say the Rangers are the only ones that should be motivated. The Devils have had a run of good results with good performances with some really crummy ones in the middle. As the end of the season comes up, the Devils need to get their offensive issues sorted. While it may not matter whether the Devils go into the postseason hot, I don't think anyone wants them to back into the playoffs. More importantly, they still have to stay ahead of Ottawa to hold onto the sixth spot and a win tonight would go a long way in ensuring it. It's a rivalry game for the Devils and beating on the Rangers in a second consecutive meeting would be an excellent way to bounce back after a terrible game against Pittsburgh. The fans would certainly feel a lot better about it.

According to this Sunday post by Tom Gulitti, Peter DeBoer will wait until later today to make any most of his lineup decisions; but DeBoer did say that Martin Brodeur will start this game. This news should surprise nobody who has been paying attention to this team. Martin Brodeur has been excellent so far this month after a fantastic February. He has also been the only consistent performer on the team this month - win or lose, supported or not. One would think such an example would drive the team to step it up, but I guess "leading by example" is just a phrase.

Anyway, tonight should make for a great goaltending match-up on paper. What about the forwards? Well, the most dangerous Rangers are as follows: Marian Gaborik, Brad Richards, Ryan Callahan, Derek Stepan, and Carl Hagelin. From the last one to the first: Hagelin is very swift and is deceptively strong on the puck. He was the one who made that killer pass to Stepan for that one goal against the Devils on March 6. Speaking of, Stepan has a great shot and has become a do-it-all second line center on the Rangers. He's only going to get better. Callahan, Richards, and Gaborik are each third, second, and first on the team in scoring. Callahan only has two goals and an assist in his last five games, but he did get seven shots on net against Colorado - he could be bringing his shooting stick tonight. Richards and Gaborik had four-game point streaks snapped against the Avs. Richards had five goals and five assists in his streak while Gaborik had three goals and five assists in his. Both will be looking to get back on track. I'm hoping the defense's collective bad day against Pittsburgh will just be that and they'll literally be in better position to dull the Rangers' attack.

As for the Devils, well, everyone kind of needs to get back on track in some way or form. I'm confident Ilya Kovalchuk and Zach Parise won't be so quiet since they've been generally good about getting rubber on net. Ditto David Clarkson namely because firing pucks is his one of his "things." The real questions lie from whether the others will follow suit. What can we honestly expect from the defensemen? None of the Devils' six has a particularly dangerous or even a good shot; but getting it towards the net should be an attainable goal, right? How about that second line? Patrik Elias prefers to make the play rather than finish it, but he will need to get involved more often. Petr Sykora did score against Pittsburgh, perhaps that will inspire him to take more initiative in both ends of the rink. Perhaps Dainius Zubrus will be a factor tonight. There's also the matter of the young centers Jacob Josefson and Adam Henrique. Since they're in between wingers who tend to take initiative themselves (OK, that's really with Clarkson alongside Josefson, but go with it), it's not always easy for them to get on the boxscore. They should make the effort anyway because they can make the attack that more dangerous. Ultimately, that's what the Devils need to do tonight: be more dangerous on offense.

That's my take on tonight's game. Now I want to know yours. What specifically do you think will be the key to tonight's game? Will the Devils bounce back and beat the Rangers in their final game against each other in this regular season? Will the Devils even crack 20 shots on goal tonight, much less 26? Please leave your answers and other thoughts about tonight's game in the comments. Thank you for reading.