Share All sharing options for: New Jersey Devils Have Surged in 5-on-5 Play Since All Star Break with Better Goaltending

The New Jersey Devils have really kicked it up a notch since January 30. The team has went 15-6-2, and they're closer to fighting for the #5 seed instead of battling for any kind of playoff spot. With the 1-0 shootout win over Colorado, the Devils have secured a winning percentage of 50% with 11 games left in the season. They're highly likely to make the playoffs according to Sports Club Stats. Both Moreover, their goal differential is currently at +14. That means if we take out the 11 shootout wins, the Devils would still be positive. There are plenty of reasons for Devils fans to be pleased with the team even if they didn't score any goals in their last two games. After all, they've been surging since the All Star break.

A key area where the Devils have improved has come in 5-on-5 play. Please continue on after the jump to see two large graphs that highlight how far they've come and in what categories.

These 5-on-5 PDO and for-against ratio graphs from Behind the Net highlight the growth the Devils have seen at even strength. Remember: PDO is the summation of save percentage and shooting percentage and the goal ratio is goals for over goals against. 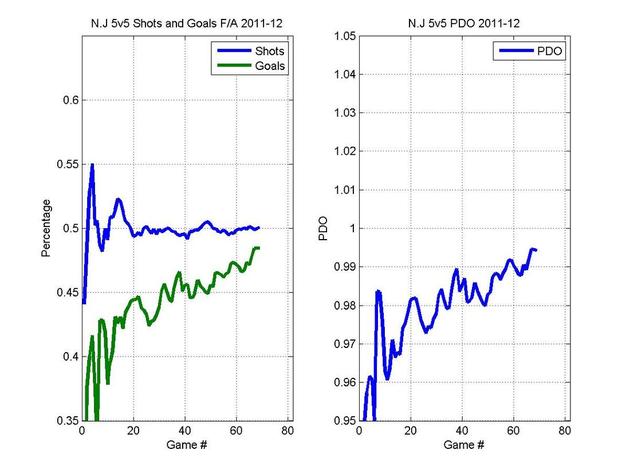 Since game #49, a 4-3 shootout win over the Rangers, the Devils have experienced a considerable upward trend in both in PDO and goal ratio. It hasn't been smooth, but the overall trend has been great. It means there have been improvements in shooting and save percentage, since they drive both stats.

A closer look at the associated data that formed this graph shows that the Devils have fluctuated within the 8-9% range for most of this season. While they've taken a hit given the last two games, I suspect they'll continue to be in that range. Since there has been variation there along with the fact that the shot ratio hasn't remained consistently around 50%, the main driver for this surge has been improved goaltending.

Martin Brodeur and Johan Hedberg have both been fantastic at even strength since the All Star break. According to the datum chart, the Devils have jumped from being around 89.5 - 90% to 90.3 - 90.7% in 5-on-5 save percentage. That may not seem like a big improvement, but it still means fewer goals against. Throw in the fact that the team's even strength shooting percentage got a bump while this has been happening, we've seen some big jumps in PDO and goal ratio. Matt Evans focused on Brodeur yesterday. It's also worth noting that the Moose has stopped 80 out of 87 shots in 5-on-5 situation - a 91.9% save percentage - so he's chipped in as well.

The fact that the shots ratio has stayed consistent tells me that the team as a whole hasn't really driven the play any differently than they have been. Take that for what it's worth. The shooting percentage has been quite good this season; but the improved goaltending has really helped the team succeed in 5-on-5 play. Since a majority of every hockey game is played in a 5-on-5 situation, then it's no real surprise that the team has been getting more points and wins. The real question is: can the goaltending improve further to league average and get the team's PDO and goal ratio to average levels? With 11 games left, maybe not within this regular season. Perhaps in the playoffs - which would be a very good thing for the team. At least they're not regressing towards game #82 like some teams.

Will the Devils continue to get better results even strength, or will they level off over the next 11 games? Will Brodeur and Hedberg continue to remain solid or better in nets, will they slip up soon? Please leave your answers and other thoughts on this matter in the comments. Thank you for reading.