Last year I wrote a 'Getting to Know You' post on Devils defensive prospect Corbin McPherson. McPherson, the 3rd round pick of New Jersey back in 2007 is slated to graduate this year and should be part of the Albany Devils next year. (In fact, if Colgate doesn't win the ECAC tournament and fails to receive an at-large bid to the Frozen Four Tournament, then perhaps we might see McPherson join Albany for a few games this year.) As he reaches the end of his college career I wanted to check in with someone who has seen him mature and grow as a player during his time at Colgate.

Once again, I reached out to Colgate radio play-by-play announcer John McGraw who broadcasts the Colgate games on 93.9 FM WXKZ. You can follow John on Twitter by going here as that will get you updates on all the Colgate Red Raiders hockey action. John also contributes to a blog that that focuses on Colgate hockey Go Gate Hockey. The Twitter feed for the site GoGateHockey is located here .

I encourage you all to give John a follow @JohnMcGrawWKXZ as this weekend Colgate plays in the ECAC semifinals against Union on Friday afternoon at 4:30pm. The game is at Boardwalk Hall in Atlantic City.

After the jump I ask John some questions on defensive prospect Corbin McPherson. I also update the Devils prospect's statistics along with some other news and notes. 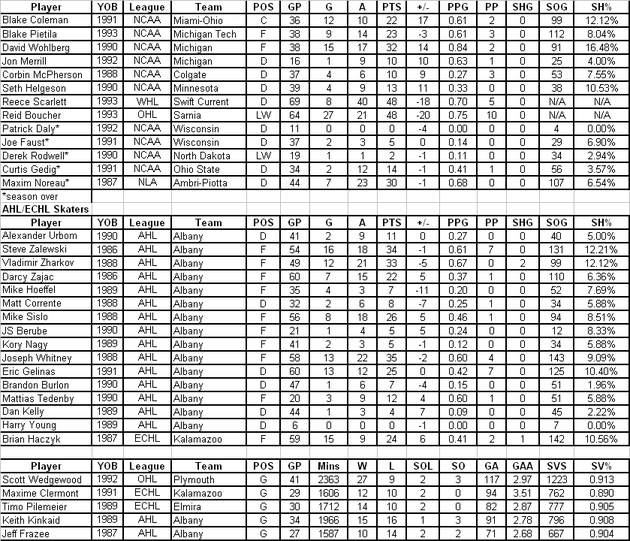 Tom: It's Corbin's senior season and it seems that he is firmly established as the team's defensive stopper. What aspects of his game has he improved at the most in the four years you watched him? What items will be need to work on to be successful at the professional (AHL, NHL) level?

John: The biggest aspect of Corbin's game that has improved over the last four years is his ability to stay out of the penalty box and on the ice. As a freshman, he was among the team leaders with 50 penalty minutes. And the minutes were accumulated through various fouls, some rough play and maybe a skirmish here and there. Obviously the college game is a little less rough than say junior hockey in western Canada where Corbin came from (Cowichan Valley BCHL).

He dropped down to a career-best 20 penalty minutes as a sophomore and this year he's at 22 minutes through 34 games. I forget which year it was, maybe his sophomore season, but basically his message to me in an interview was that he couldn't help the team if he was in the penalty box; very mature thing to say to basically admit he was in the penalty box too much and that it was hurting his team.

Also, he's had a lot more power play responsibility this season. He has had a regular spot on the blue line during Colgate's power play and he seems to have a knack for scoring game-winning goals. I believe of his 10 career goals, five have been game-winning goals. Keep in mind, he didn't score as a freshman. I don't have an exact number right here, but basically when scores, Colgate has won more than 75% of the time.

The toughest part of the season I think for Corbin has been his physical play. Listed at 6-4, 210; he's a big hoss to put it mildly. However, the problem has been when he throws the body around and goes for a check, the collision generally looks worse than it actually is simply because he's so much bigger than some of the players that he's knocking down/putting into the boards. And the immediate reaction of the officials is, based on what they see, to call a penalty. If Corbin made a physical play in a pro game against someone the same size or slightly smaller, it would go essentially unnoticed by the referees.

Tom: With Hobey Baker nominee Austin Smith and linemate Chris Wagner driving the scoring for Colgate, is it safe to say that McPherson is used often in the defensive zone, on the penalty kill and with other less skilled/proficient players? How is coach Don Vaughan using him?

John: He has logged some significant heavy minutes this season and he has been used in all three phases of the game - even strength, power play and penalty kill. As I said above, his power play time has really gone up this year. Colgate has used two five-man units on the power play and Corbin is part of a group that includes Columbus Blue Jackets draft pick Thomas Larkin (6-5) and talented freshman John Lidgett, the cousin of former Hobey Baker Award winner Ryan Duncan (currently with the AHL Portland Pirates).

The defensive pairings have been switched around some this season so Corbin hasn't really had the same partner night in and night out. However, of the eight defensemen on the roster, he is one of the five that dress regularly. In fact, he hasn't missed a game this year and has missed just two games in four seasons. He'll end his career among the top 15 in all-time games played at Colgate.

Now, are the coaches asking him to go out, score goals and quarterback the offense. Not at all. Obviously he's more of a defensive-minded defensemen. If need be, he can rush with some speed and agility from one end of the ice to the other (a very under-rated part of his game) however he's more counted upon to shut down the offensive play at the other end of the rink. While there haven't been set penalty killing units, Corbin is usually one of the defensemen rotated through on the penalty kill and he has logged a good number of minutes playing in man down situations.

Tom: You mentioned once on Twitter that Corbin's nickname on the team is the 'Big Unit'. At 6'4 and 210 you can see where he got that nickname. Size in the AHL/NHL for a defensive defenseman is important but with the post lockout changes, skating and positioning might be more important. Does Corbin's skating/positioning impress you?

As I mentioned above, his skating is actually a really under-rated part of his game. For a big guy, he skates well in the open ice (really long and flowing stride) and I guess one doesn't necessarily expect that from a 6-4 defenseman. Occasionally during a line change, he'll pick up the puck, skate from blue line to blue line and spearhead the play into the offensive zone and sometimes that will even include a wrist shot on goal.

His positioning along the boards is really strong and he is one of Colgate's better defenders along the walls and in the corners. Of course, size does help. He's very much become adapt at using his size to pin players up against the wall and then take the puck away. With that size, his wingspan often helps him dig a puck free from a cluster of skates along the bottom of the wall. In transition, he'll close in on forwards and force then wide into the boards. This usually results in a tie up and either the puck is taken away from the offensive player, another defender comes in to win the puck it it simply squirts into the corners.

And this is a facet of his game that has really improved over four years and it has led to him being able to stay out of the penalty box. Some of the penalties in his first season were from stick fouls, interference, grabbing on and not letting go and these just resulted from not moving his feet quick enough to stay with forwards. Those type of problems at least from where we stand now have vanished. That said, he'll need to work on improving in this area even more when he moves up to the professional level because if there is one thing I've heard from players that have moved on is that the game happens a lot faster and the speed of everyone increases.

In the ECAC you have seen future professional defensemen like Ryan O'Byrne, Dylan Reese, Mark Borowiecki, and Ben Lovejoy play. How does McPherson stack up against those players?

Well, unfortunately of those players you've mentioned, I've only seen Mark Borowiecki in person and that was a handful of times when Colgate played Clarkson. And in terms of comparing with Borowiecki, I really don't remember Borowiecki that much to comment. That said, I'll try to answer your question as best I can given that Colgate has had a few kids over my five years make it up to the National Hockey League - Jesse Winchester (Ottawa), Mark Dekanich (Nashville though now with Columbus) and David McIntyre - and I do remember them very much.

I think size-wise, there's no question that Corbin can make the jump right into professional hockey. He has the body and the strength to compete right away. He's also durable which I think is a big deal given the length of the professional season, the number of games that one plays and the almost daily grind of the schedule. I've seen a few kids over the years be great college players but injuries took their toll and they didn't quite pan out at the next level. Also, there's a grit to his game that you have to have to play at the next level - wanting to go into the corners, grinding it out along the wall and getting your elbows dirty.

Endings and New Beginnings: At this point of the year, teams in the NCAA start to get eliminated from play. I have noted this above by placing asteriks next to players whose teams are done fro the year. As of now only Miami, Michigan, Michigan Tech, Colgate and Minnesota are still active. After this weekend, the Frozen Four field will be set and the only Devils I expect to be active are the prospects from Michigan, Miami and Minnesota. Hopefully Michigan Tech or Colgate can surprise and win their conference tournament and gain a bid.

More importantly this means that players like McPherson and Michigan senior David Wohlberg (and perhaps sophomore Jon Merrill) will likely join the Albany Devils on a ATO (amateur try-out) contract before the Albany season completes. It's likely that any ELC those players sign will begin in 2012-12.

Albany's Struggles:Albany lost two of three games over the weekend and are in a dog fight for one of the two final playoff spots in the AHL's Eastern Conference. If you have some time, check out the 'Playoff Primer' link here that lays out the races for the AHL playoff spots.

I don't think it's anything major but Mattias Tedenby was a healthy scratch for yesterday's game. I doubt it is for a call-up as each team only has four non-emergency call-ups they can make from the AHL after the trade deadline, so teams have to use their call-ups judiciously.