What can we expect down the stretch for the New Jersey Devils?

Share All sharing options for: What can we expect down the stretch for the New Jersey Devils?

There are about two full calender months left in the hockey season. The New Jersey Devils are on a five game winning streak and will face a St. Louis Blues team that has the same number of wins as them. For those of you who are unaware; the Devils are still a bubble team. They have a 6 point cushion from the Florida Panthers, which would drop them out of playoff contention. However, the Washington Capitals have 60 points and are the leader of the South East division, so both the Panthers and the Capitals would need to gain points if either team would want to make a run at a seeding outside being division leader.

I'm not going to summarize playoff scenarios in this article. I will break down how the Devils have scored against different divisions and what this means for the Devils playoff chances. Feel free to read a little pre-game material after the jump. (Big chart to look at if you are feeling lazy)

Whenever you are looking at the final stretch before playoffs, it is important to look at the remaining schedule and see how you did against the teams you have left to play. So, I compiled the goals against and the goals for the Devils for each team, and then added up the totals for division and conference. Below is the table: 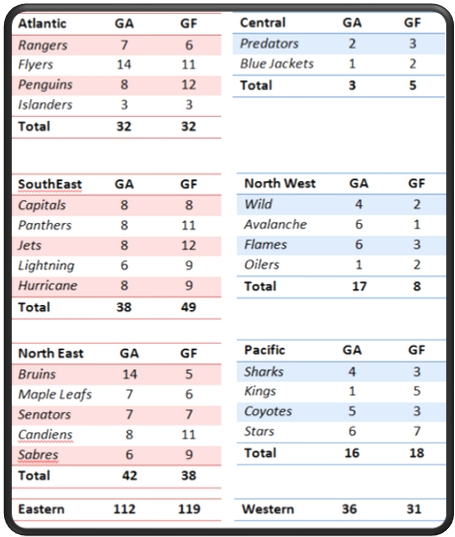 The Devils have a record of 11-4-0 against this division. Only the Capitals and the Panthers are legitimate playoff contenders at this point in time, so the Devils should take a majority of the points against these teams. Side note: it's good to see Winnipeg doing "well" in their first season in Canada, it's great for the NHL to have a continuously sold out arena.

The Devils play the easy North East teams, Canadiens and Sabre, only once more each. The Devils have one game against the Bruins. This game will be a huge measuring stick for the playoffs. The Bruins have flat out dominated the Devils and if they want to be legitimate cup contenders, they need a win against Boston for their own confidence. The Devils have two games remaining against each bubble team (Maple Leafs and Senators). These games will be large determinants in who makes the playoffs. They aren't necessarily "must wins", but they are definitely circled on Peter DeBoer's schedule.

The Devils have three more games to play against the New York Rangers. Needless to say, these games will be extremely hard games. If the Devils take 3 points in those three games, I would be surprised. The Devils then have two games against the Penguins and the Flyers. These games will have a huge impact on the final seeding in the conference. Personally I hope the Devils end up getting sixth in the conference because then they will end up playing either the Panthers or the Capitals. The Devils should be able to win half of the games against the Flyers and Penguins. That leaves the Devils with four games against the Islanders. The Islanders are 6-2-2 in their last ten games and are quietly rising in the basement of the East. I would normally say that these games should be easy, but they may be tough if the Islanders stay hot. The Devils are 8-5-0 in the Atlantic and hopefully they can continue to improve upon this record.

With 29 games remaining, there is a very good chance that the Devils will end up playing into late April. Therefore, I'll ask a question every fan is debating: Will the Devils make the playoffs? and if so, where will the Devils be seeded?