Share All sharing options for: Ilya Kovalchuk by Game-By-Game Fenwick Ratio Graphs Since 2009

Gabe Desjardins has come up with a brand new feature at Behind the Net: game-by-game player graphs. The graphs chart out a player's Fenwick ratio (shooting attempts for vs. against without blocks), goal ratio (for vs. against), and offensive zone start percentage over the course of a NHL season. Gabe recently announced and released the graphs for this season over at Arctic Ice Hockey. Player graphs will be updated daily at Behind the Net and he has them for as far back as 2007-08. Who knows, more may be added or modified in the future. In any case, the current graphs are great way to quickly see how a player has been doing on the ice and where they are starting over the course of a season.

Just out of curiosity, I decided to take a look at a few of them for one of the most popular New Jersey Devils: Ilya Kovalchuk. He was acquired in February 2010, he's been through three different head coaches, and subject to all kinds of praise, criticism, and everything in between from fans, experts, and everyone else. The perception on him is that he's not much of a possession player; his real value comes from scoring - and he's not doing it at rates when he was with Atlanta. With these graphs, we can learn a little more about Kovalchuk's time as a Devil. Please follow along after the jump to find out.

Gabe has the entire list of player graphs in this page of Behind the Net. Also: you can change the starting points of the graph by changing the number at the end of the URL. The end, "ming=1", refers to the first game of the season, or game number 20001. You can change that number manually and if you want a specific game, just take the last four digits of the game number at NHL.com. Lastly, all of the stats are for 5-on-5 situations. 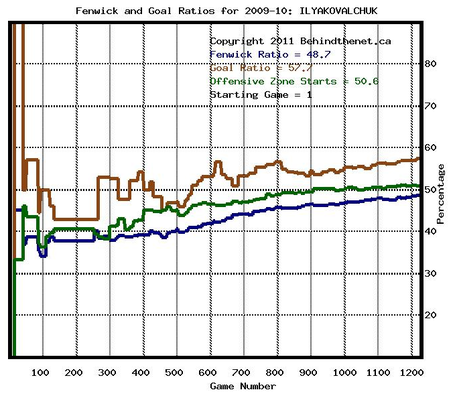 This is the graph of the 2009-10 season for Ilya Kovalchuk. He started as an Atlanta Thrasher and he ended as a New Jersey Devil. Kovalchuk's first game as a Devil was on February 5, 2010, which was game number 20850 - right in between 800 and 900 on the chart. Prior to that time, we can see that he was on an upward trend in both Fenwick ratio and offensive zone start percentage. Yes, the Thrashers thought it was best to utilize their top offensive forward in their own end of the rink. Anyway, once he came to New Jersey, he got to start around 50% of his zone starts in the right end of the ice for an offensive player and his Fenwick ratio got better and better. The upward trend continued. His goal ratio dipped at the time of the trade, leading to some initial criticism of the deal since he wasn't scoring goals right away while Niclas Bergfors was. As the season ended, Kovalchuk improved in that regard. 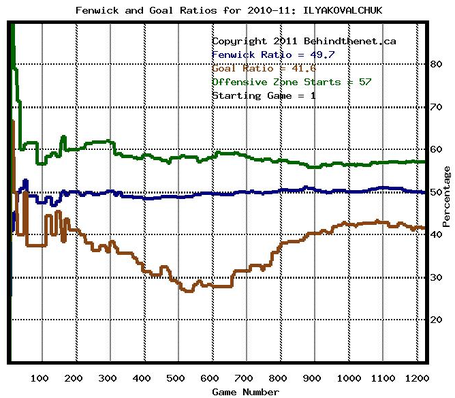 Now here's Kovalchuk's graph for the 2010-11 season. All season long, both John MacLean and Jacques Lemaire gave him very favorable zone starts. All season long, the goal ratio was in the toilet. MacLean was fired and replaced by Lemaire prior to the December 23, 2011 game which was game number 508. At that point, Kovalchuk's goal ratio was just about at rock bottom after a long, prolonged fall that definitely had a hand in MacLean losing his job. After some time, it shot back up at around late January, which coincided with his hot production from that point onward. Still, he finished the season rather low in this regard.

The curious part of this graph is that his Fenwick ratio stayed fairly consistent. It was around 50% under MacLean and it remained around 50% under Lemaire. While I'm not going to dispute that Lemaire helped Kovalchuk's game in some way, the fact that his Fenwick ratio didn't see too much of a sustained improvement tells me that Lemaire's arrival as interim head coach didn't make him a better possession player. His play in the defensive zone may have improved when it came to decision making and positioning; but it didn't lead to a really positive swing in shooting attempts. Perhaps that really happened in the 2009-10 season when Kovalchuk went from about 45% to 48.7%; though Kovalchuk was on pace to improve in that ratio Atlanta prior to the trade. 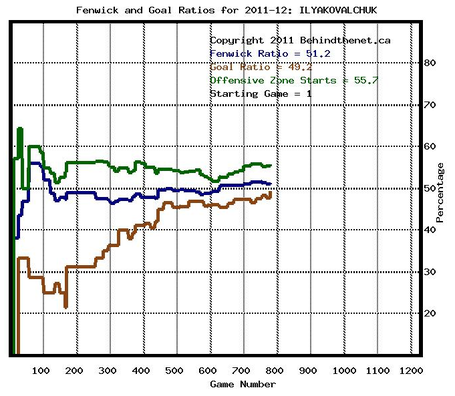 Finally, here's Kovalchuk's graph for this season. The early part of this graph highlights Kovalchuk's struggles. He wasn't above 50% in Fenwick ratio early on and the goal ratio was just terrible. However, from December onward, Kovalchuk returned to being an average possession player. In fact, he's actually been a little bit above average over the last few weeks and is now sitting at 51.2%. For most players, that's not much to write home about. However, I think it's quite good for a player who's not really about puck possession and was supposedly a defensive liability. The goal ratio has worked itself out after a slow start and Kovalchuk is on the cusp of being at 50% for the first time since the 2009-10 season, where he was well ahead of the game in that department. And Kovalchuk's performances that created this superior chart have mostly come from his play as a right winger. He simply hasn't been that bad at RW. Or as a Devil given all three graphs outside of goal ratio.

One more thing, it's quite clear that the Devils coaches - Lemaire, MacLean, and Peter DeBoer - have avoided whatever Atlanta was doing when it comes to zone starts. Kovalchuk is an offensive player and has consistently been given more offensive zone starts than defensive zone starts as a Devil. This makes sense. While Kovalchuk's not going to win any Selke trophies, all three bosses have succeeded in putting Kovalchuk in favorable spots that favor his strengths. If only Atlanta figured that out or decided to sacrifice someone else in their own end of the rink.

The other big takeaway from all three graphs is that Kovalchuk hasn't been a black hole in possession when it comes to Fenwick. When he first came to New Jersey, he was still trying to get to the break-even point after a harrowing beginning of the season in Atlanta and came up short. In that nightmarish 2010-11 season, Kovalchuk hung around 50% throughout the season with two different coaches. This season, with new linemates and a new head coach, Kovalchuk's doing even better. I wouldn't plan the parade just yet, though. The improvement isn't by all that much; he's not going to suddenly turn into Patrik Elias in terms of possession. He'll have some bad possession games; but it also means he'll have some good ones to balance it out. The main point is that he was not at all getting wrecked out there at evens in 2009-10 and 2010-11 as a left winger or now in 2011-12 as a right winger. By this measure, Kovalchuk really hasn't been an on-ice liability in New Jersey at all. That's pretty good and I think the graphs do a great job showing that off.

What did you learn from these three graphs? Have you found them to be useful in looking at how a player has done game-by-game over the course of a whole season? Did you come to a different conclusion about Kovalchuk, or does this support what you already thought about the player? Which Devils do you think would come out good or bad in these graphs? Please leave your answers and other thoughts about Kovalchuk's performance based on these graphs. Thanks to Gabe for coming up with a nifty new feature at Behind the Net and thank you for reading.