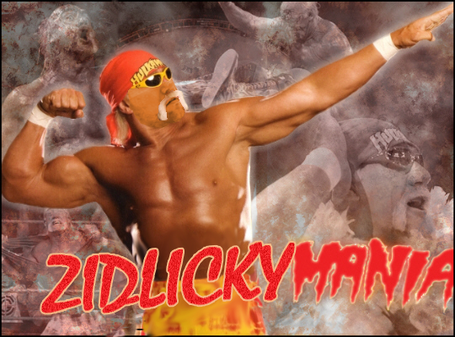 Per Tom Gulliti, the New Jersey Devils have acquired Defenseman Marek Zidlicky from the Minnesota Wild in exchange for Kurtis Foster, Stephane Veilleux, Nick Palmieri and two draft picks- a 2nd rounder this year (the Capitals' 2nd round pick) and a conditional pick in 2013- which will be fulfilled if the Devils 1) Make the Eastern Conference finals this year and 2) Zidlicky plays in 75% of the games in the first two rounds.

The good news is that the Devils gave up a bunch of magic beans- as in it's not like those draft picks or players will be any help- Foster and Veilleux are both expiring contracts and weren't going to be re-signed. Palmieri's future with the organization looked bleak anyways, as he's gone from top 6 forward to frequent call-up. For all we know, those draft picks could end up bearing busts or get traded for a player who gets run out of town. The bad news is that the Devils didn't get anything back for taking a cap problem- which kind of sucks. More on Zidlicky after the jump.

Zidlicky isn't going to be brought in to play defense. He doesn't face significantly tough competition and has been given protected zone starts (also- keep in mind that the Wild get literally no offensive zone starts). He's being brought in to help the team out with offense. While his numbers this year don't suggest that he's an offensive defenseman, he has been at odds with his coach Mike Yeo (the same Mike Yeo who thinks that the Homer Simpson approach of exhausting their opposition by letting them throw every punch) and he has been benched in favour of rookies such as Nate Prosser and Marco Scandella.

The good news is that Zidlicky leads all Wild defensemen in Corsirel- and while he's not pushing play forward like someone like Mark Fayne does, he's been doing a better job than any other Wild defenseman has been doing. He's also doing a decent job generating shots at evens as well- his 26.3 shots for/60 is better than any defenseman on the Devils not named Kurtis Foster. He's a much better all-around defenseman, and while he's much smaller than Foster, he's not going to be a defensive liability like Foster was.

Another thing to point out is that Zidlicky gets a new start- Mike Yeo's system was a more defensive system (i.e. not shooting a lot) and Zidlicky wasn't too happy with his role in Minnesota. Peter DeBoer and the Devils have a more offensive minded system, and what Zidlicky does best is encouraged by DeBoer. Zidlicky was basically a square peg in a round hole when he was with Minnesota. Zidlicky should be able to thrive and succeed in DeBoer's system.

Another point to bring up about Zidlicky- while he's likely going to be part of the top 6, I think this move has some implications regarding Henrik Tallinder's status for this season- which Gulliti described as "not very convincing". If Tallinder isn't returning, the top 6 will likely be Salvador-Volchenkov/Fayne-Greene/Larsson-Zidlicky. If Tallinder returns, it looks like Adam Larsson will be the odd man out. Zidlicky also has another year remaining on his contract- which means that the Devils have 5 defensemen signed through next season- Tallinder, Greene, Volchenkov, Zidlicky and Larsson- with RFA defenseman Mark Fayne likely being re-signed. This would mean that Bryce Salvador will not return, and it likely means that Jon Merrill or Alex Urbom will not be with the Devils next season.

With all that being said, I'm not too unhappy with this trade. Zidlicky fills a weakness on the Devils blue line, which is a lack of a true puck moving defenseman. While the Devils did give up a lot, the Devils are banking on Zidlicky returning to form with the team. If they're able to make a big playoff run, I won't be too unhappy. However, if Zidlicky doesn't pull his weight and becomes a locker room problem like he [supposedly] was in Minnesota, I'd be pretty unhappy.