Share All sharing options for: A Bigger Picture Look at the 2011-12 New Jersey Devils Defensemen

With the trade deadline coming up next week, it's perfectly reasonable to wonder whether the New Jersey Devils will make any moves. It's arguable that they already did when they acquired Alexei Ponikarovsky last month and signed Steve Bernier to a NHL contract. However, with Henrik Tallinder inactive with blood clots and Adam Larsson still not practicing yet (though it may happen soon), there's reason to think the Devils could look to pick up a defenseman for depth. Plus, the team's history of action at the trade deadline includes many defensemen acquired for that purpose: Ken Klee, Richard Smehlik, Niclas Havelid, Brad Lukowich, and Bryce Salvador just to name a few. In terms of who the Devils could look at, Tom had a very good breakdown of who may be a realistic target in his post on Monday. Go read it if you haven't yet.

However, I don't think the Devils need to make a move to bring in another defenseman. Larsson should return eventually and it's not impossible for Tallinder to come back before the end of this season. The defense should be upgraded with the return of either player. Nevertheless, the discussion in Tom's post got me thinking about the Devils' defensemen as a whole this season. So did a comment Ken Daneyko made in the recent interview David Sarch and I had with the Devils legend on the last Talking Red - which you should listen to if you haven't yet. Dano thought the current defense is underrated. Considering the general sentiment I have about the defense is that it doesn't seem all that dominant, it certainly piqued my interest.

Therefore, I took a larger look at the Devils defense a little more closely. Essentially the Devils defensemen have been excellent at preventing shots. Normally, that alone is fantastic. However, they are seriously lacking on offense and combined with that it's a defense by committee, the perception of a weaker Devils blueline exists. I'll go into the numbers after the jump.

Let's start with what I normally focus on when considering a defense: shots against. Over all situations and prior to Tuesday's games, the Devils rank fourth in the league with a shots against per game average of 27.3. Breaking that down a little further at Behind the Net, the Devils are tied for the league's second best SA/60 rate in 5-on-5 situations at 26.4. This doesn't mean the Devils won't have a game where they get out-shot quite a bit. What it does mean is that the Devils as a whole this season have been very good about allowing relatively few shots on net. Only St. Louis, Detroit (who is tied with the Devils in 5-on-5 SA/60), and Pittsburgh are really in their realm in this regard. St. Louis is the best in the league on defense this season, while Detroit and Pittsburgh are so strong in possession and are led by a few "name" players. The Devils are among some very good company on defense.

The impressive part about the Devils' relatively low shots against rate is that there aren't any real black holes on defense when it comes to shots against. According to Behind the Net's player breakdown (charted above for snapshot purposes), only two defensemen have higher on-ice SA/60 rates than the team: Alexander Urbom and Kurtis Foster. Urbom was just called up for a bit and Foster's not too far ahead of the team rate anyway. Even so, a SA/60 rate of 26-28 isn't terrible at all.

What's really outstanding is that Anton Volchenkov, Mark Fayne, Andy Greene, Matt Taormina (it's been 24 games already, time does fly), Adam Larsson, and Bryce Salvador all have played regularly when active and they've held their opposition to less than 25 shots per 60 minutes at even strength. That's really impressive. It's even more amazing when you compare the on-ice SA/60 rates of other defenseman in the NHL. All six of those Devils rank in the top 33 of all 216 defenseman who have played at least 20 games this season according to Behind the Net. Volchenkov (6th), Fayne (13th), and Greene (16th) are among the top 20 in the league; and the rates of Henrik Tallinder (50th) or even Foster (100th) aren't too shabby either.

As much as we discuss, complain, and comment on the Devils defense, we must be clear: they are very good at preventing shots on net. If you're like me and believe that's the primary function of a defenseman, then we must conclude that the Devils defensemen have been very good in the big picture.

I will offer this caveat: the Devils have been notorious for under-counting shots at home. That could make the Devils' numbers a little better than they are. I'd love to see what their road numbers are to cut down on scorer bias, but it wouldn't surprise me if their SA/60 rates are still relatively low on the road. After all, the season is 58 games old for New Jersey and if the Devils were really driven by bias, then it might have been somewhat accounted for by now.

Jumping back from the reality that this castle may be built on sand (credit Hockey Prospectus' Tom Awad in the last link for that metaphor), I must say that the Devils defensemen have been very good in the big picture - as a group. As the Corsi Rel QoC suggests, there really isn't a main man or pairing among the group. Fayne and Tallinder have taken on tougher competition at even strength than the rest this season (I'm ignoring Peter Harrold's three games), but that wasn't always the case. That's been adjusted due to injuries but we've seen Greene, Salvador, and Volchenkov their share of the toughs at points this season. Ice time provides stronger evidence that this is a blueline that functions by committee. 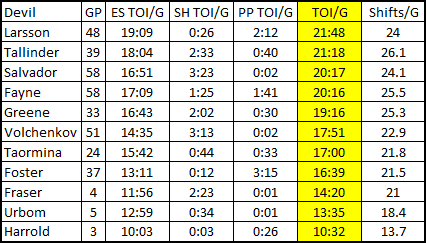 According to NHL.com (charted above for snapshot purposes), the Devils' leader in ice time on defense is Larsson. Leading the team with 21:48 of overall ice time per game isn't a relatively large amount. In fact, Larsson ranks 66th in the NHL in ice time per game prior to Tuesday's games. The Devils don't rely on a single defenseman or defensive pairing like many teams. Peter DeBoer has utilized his defenders, sometimes without a choice due to injuries, fairly evenly with four defenders averaging at least 20 minutes per game and Greene getting close to becoming the fifth. While the assignments vary among the defenders, the minutes they play have been spread out among the defenders. Even with the injuries to Larsson and Tallinder, that the Devils' SA/60 rate at 5-on-5 or overall SA/G rate hasn't shot up speaks to the effectiveness of the Devils' defense. They have performed well overall and they've done it as a unit.

I think that helps fuel some of the lack of confidence in the defense as a whole. There isn't anyone on this group that we could say has been dominant - especially on offense. Sure, some defenders will have good nights or play pretty well overall. Yet, none of these defensemen really push the play forward. According to Behind the Net, Fayne leads the D in on-ice Corsi but only at a modest 2.07. Tallinder and Larsson are just above zero and everyone else is negative. Even adjusted for zone starts (I did this 10 games ago), no defenseman has been significantly pushing the play forward. The oft-desired puck-moving defenseman is still missing on this blueline.

In addition, this blueline just doesn't produce a lot of points. You'll get the occasional goal or assist here and there; but no one's really been a regular producer. Prior to Tuesday's game Larsson leads the defensemen in points with 16, where he's tied with 7 defensemen for 76th in the NHL. And he's been injured since the beginning of this month. No defenseman has picked up the pace. What's more concerning is that the blueline also doesn't take a lot of shots. The team leader is Kurtis Foster with 70 and 16 of those came when he was on Anaheim. Mark Fayne had 67 get to the net all as a Devil, but that's still 1.15 shots per game. Within this season, Foster's 54 shots in 29 games is the team's top rate. If a defenseman gets multiple shots on net, then it's a feat because it doesn't happen often enough by any single defenseman. There's a reason why the power play regularly has four forwards; not even Foster has been successful at getting shots on net regularly. And if the D isn't getting shots, then they're not likely to get points.

Overall, we can't ask for much more out of the defense in terms of preventing shots. They'll have an off night and allow a lot more than 26 shots per 60 minutes or 27 shots per game. This doesn't mean they don't make mistakes that result in goals against either. In the big picture, though, very few teams are on New Jersey's level when it comes to defense at evens. They don't have a big stud or a big pairing to lean on. It's been a group effort this season; and I have credit Peter DeBoer and Larry Robinson for their work with the defenders as well as the defensemen themselves.

Yet, the blueline is still flawed because of the lack of offensive support. The defensemen haven't produced much and, more importantly, they don't get a many shots on net on a regular basis. Most of them are not necessarily going to push the play forward when they're on the ice at evens. They may prevent shots; but that doesn't preclude the action going the other way. I think this may be why many fans feel the team needs that big stud defenseman to put the blueline over the top, or that they need further depth at the trade deadline to give the defense some kind of a boost. I think it also helps explain why Daneyko thinks this defense is underrated despite some great numbers. I can certainly understand either. At the same time, it's helps me think that the Devils really don't need to acquire another defender next week. Getting Adam Larsson and/or Henrik Tallinder would provide said boost (and move Harrold/Taormina/Foster out) while the team will likely remain very stingy relative to the rest of the league when it comes to allowing shots.

Anyway, that's my look at the bigger picture of the team's defense this season. Now I want to know what you think. Does this conclusion make sense or did I miss something important or some wrinkle about the team's defensemen? Were you surprised by the shots against numbers, or did they confirm what you may have already felt? How else would you measure the defensemen? Please leave your answers and other thoughts about the play of the Devils defensemen in the comments.