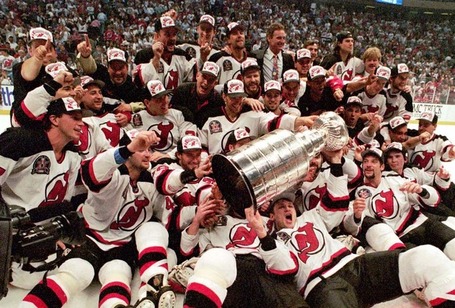 And by remember, i mean you actually watched and followed the team then. I ask this because I'm curious of those of you who do remember those years if you at any point in the regular season thought you were watching a true Stanley Cup contender? Not talking about the playoffs... just the regular season.

There's been a lot of positivity surrounding the team's play of late, and some sobering back to reality prognostications about it as well (I'm looking at you Triumph44!). I by no means am imply that that when i look at this team I see Cup contender... but that's my point. I didn't at all feel that way about the '95, '00 and '03 teams as well. They all had their ups and downs and positives and negatives (some more than others. I'm looking at you '95 team!) and at no point during the season did I think i was watching a team that would eventually hoist the cup. But they did. I actually remember being shocked once everything was said and done that the devils were Cup champs and the last team standing again and again and again.

Conversely the one time during a season where i thought I was watching a team that i assuredly felt could win the cup ('01), the Devils lost it in 7.

Just curious regarding the fans mindset about those teams of yesteryear when they were actually playing... what were your thoughts of them as they played through the regular season? Did you think at any point you were watching the eventual Cup champion? Hell I'll even extend that to the last 5 or 6 cup winners overall when you watched them play in the regular season.

Just something to think about as we're throwing out advanced stats and roster analysis on why this team will fall short once they hit the playoffs.

P.S. I'll proof this for typos later. Off to lunch!