Its prospect update time! Below find statistical updates for Devils prospects playing in the AHL, ECHL, CHL and NCAA, trade deadline thoughts along with the notes on the resurgance of the Albany Devils. 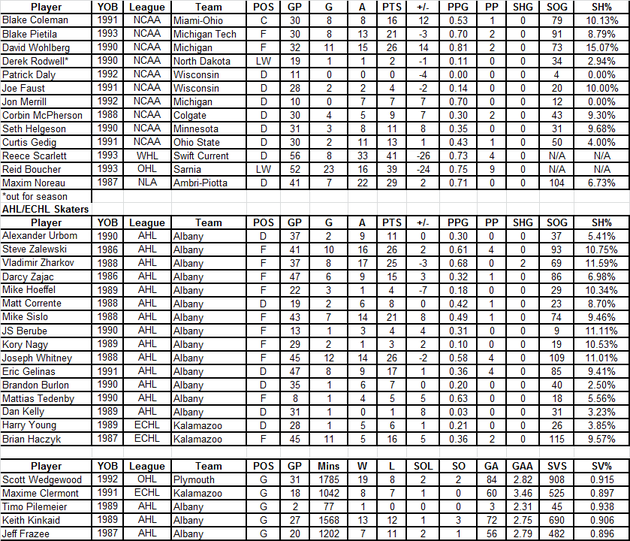 Albany's Resurgance: After a rough few weeks in which they seemed to be playing themselves out of a playoff spot, the Albany devils bounced back with three road victories over the weekend to keep themselves poised to make a run at a playoff spot in the AHL eastern conference. Only three points out of the seventh slot (currently occupied by Bridgeport and Worcester) the Devils are being paced by the addition of Mattias Tedenby who has a goal and four assists in eight games. He is a plus five during his time in Albany. Current conference standings are here. Ideally the Devils and Bridgeport (Islanders) will both pass Connecticut and drop them out of the playoffs. No AHL playoffs for you Sean Avery.

Albany will also be helped out down the stretch with a healthy Matthew Corrente who returned to the lineup over the weekend. The Albany defense had been stretched thin by AHL/NHL injuries and the trade of Joe Sova to Carolina. With Corrente's return they now have him, Peter Harrold, Eric Gelinas, Brandon Burlon, Alexander Urbom and Dan Kelly which provides Albany with a solid defensive unit going forward.

Trade Deadline Slowly Approaches: The slow trade deadline activity is frustrating to most fans, but I am of the opinion that once some new sellers come into the market (Tampa, Montreal, Islanders, a few western teams) that you will see a flurry of activity in the next two weeks, most of which will be up against the deadline. If you are wondering who the new sellers might be you can view the probability of the NHL playoff race via SportsClubStats.com here. If you don't like fancy stats/projections, James Mirtle breaks down the playoff race here, showing the current record each team needs to have to make the projected cut-off of 92 points. As a sidenote the Devils basically need to win 13-15 games to get themselves back into the playoffs.

One reason the market of sellers opening up is important is the fact that the asking price by the current small group of sellers(Columbus, Edmonton, Carolina) is steep. According to a Globe and Mail report, asking prices for rentals are either first round picks or more likely, NHL ready prospects.

If the Devils are to upgrade via the trade deadline and the asking price is 'NHL ready prospects' that limits the Devils pool of assets to Mattias Tedenby, Alexander Urbom, Jacob Josefson and perhaps Nick Palmieri or Eric Gelinas. Considering the teams financial woes, I would be cautious before moving any player who is on an Entry-Level-Contract that might make the NHL roster next year. Of course a lot depends on a GMs definition of NHL ready, doesn't it?

That said, remember that unless they expose and lose a player to waivers in the next two weeks (and there is no reason to think they would do that) or trade off a player for a draft pick, the Devils would not be able to add a player to the roster without deleting one. In other words, trading for player X and giving up a 2nd round pick isn't possible right now. The Devils would need to add in a player to make it happen. Some possible players who could be considered as additions to complete a deal from a Devils perspective would be Kory Nagy or Timo Pielmeier. Both players are RFAs after the year and are likely not to be signed.

The question remains as we come within two weeks of the trade deadline:

What type of deal, if any, is GM Lou Lamoriello going to make?

On the other hand you face financial troubles that would be helped by at least a two round run in the playoffs, two franchise players (Zach Parise, Martin Brodeur) who may never wear a Devils jersey again after this season and the prospects of a tough first round battle in Philadelphia or Pittsburgh.

While a few days ago I only expected a trade for defensive depth (insert the usual suspects like Hal Gill, Andy Sutton, etc. here) I am now coming to a different line of thought. I am now starting to think is that there might be one last trick up the old man's sleeve.

If Lou Lamoriello is one thing, it's loyal. He has been trying to put together a team since the lockout that can help Martin Brodeur attain that 4th Stanley Cup Championship. This is arguably his best team, post-lockout and because of the external factors facing the organization with ownership and Parise's future free agency, I expect something bold from Lamoriello this year.

What could this be? My gut tells me to expect a shock and awe deal, like the ones that surprisingly brought Ilya Kovalchuk and before him Alexander Mogilny, Doug Gilmour and Dave Andreychuk to the Devils.

I can't even begin to speculate on what it might be, but I expect something more substantial then the past few trade deadline deals (Martin Skoula, Niclas Havelid) for the Devils.

Merril Drives the Wolverines: A nice piece on Devils prospect Jon Merrill was published in the New York Times over the weekend. It gives you a good idea of his importance to the team, specifically on special teams. Just note that the well written piece is by a current University of Michigan student.

That's it for this week, please leave any prospect related questions or comments below.