Recapping the last week in Albany Devils action, which included three games - home vs Wilkes-Barre, and Providence, and at Connecticut

Welcome to Week 11 of your Albany Devils Roundup. This week the Devils looked to keep their winning streak going and were able to do so in their first two games. The Devils were victorious Wednesday night against Wilkes-Barre Scranton, and then again Friday at Connecticut. Unfortunately, the winning streak stopped Saturday, as Albany suffered a 2-1 shootout loss to Providence at home. This was the 6th shootout loss of the season, making the Devils 0-6 on the shootout so far. Still, they were able to collect points in every game. They now sit in third place in the Northeast division, and 12th overall in the conference. The Devils do have anywhere from 3 to 5 games in hand on the four teams directly in front of them in the standings, so they will have a chance to make up those points if they can keep playing good hockey.

This week's Roundup will only feature a recap of Wednesday's game, as I could not watch either game this weekend, for various reasons.

The Trenton Titans had another 3-in-3 this weekend. They finally got back into the win column Friday ngiht, led by Scott Wedgewood. Wedge stopped 32 of 34 as Trenton was victorious 4-2 over Wheeling.

Saturday night was a Claremont-Wedgewood rematch, and this time Clermont and the Elmira Jackels were victorious in overtime, 5 -4. This was Claremont's only appearance of the week.

Kelly Zajac scored two more goals for Trenton Friday night and then was removed from the game. He is apparently still dealing with that groin issue that kept him out for most of the year. Although he said he hoped to play the next day, he did not appear again for the weekend.

Alexandre Carrier played both Saturday and Sunday. He accumulated one shot on goal and 2 penalty minutes in total.

Harry Young played Saturday and Sunday for Kalamazoo, but did not appear on the scoresheet besides being a +1.

The biggest news of the week on the injury front is that Matt Corrente is likely out for the season with a shoulder injury.

Jay Leach is still out of the lineup with a lower body injury.

Raman Hrabarenka remains out after being cut by a skate last week. He should be close to returning.

Adam Henrique remains out with a thumb injury.

Stephen Gionta has returned to the lineup after missing two games this week.

These two teams first met in Atlantic City several weeks ago, in a very entertaining game that concluded with a 5-4 Wilkes-Barre shootout victory. Wednesday night's contest was also a highly entertaining game, a game filled with fights and goals by Bobby Butler. The Devils rode a 4 goal (5 point) performance from Butler to a 6-3 victory in a game that also featured a ton of hard hits and 7 fights. Early on, this game started as any other. Both teams were feeling each other out, and played pretty evenly back and forth, with not too much given up on either side. The Devils were first to collect an advantage, when Whitney drew an interference penalty in front of the Penguins goal. The power play, however, was rather uneventful and the Devils were not able to produce much of anything.

Shortly after the power play expired, the Devils had their first good quality chance of the game. Josefson carried the puck into the zone and dished nicely to Pesonen, but Harri fanned on the shot from in front of the crease.

About ten minutes into the game, it was still an evenly contested match. Then, the Penguins started to ramp up the pressure a bit. During one of their shifts, Wilkes-Barre had the Devils pinned back and chasing a bit in their own zone. One of the Penguins threw a puck on net, and it appeared like it deflected off Kinkaid's pad or skate. The rebound went directly to Riley Holzapfel on the far side, and he was able to control the puck and put a backhand past Kinkaid, giving Wilkes-Barre a 1-0 lead.

Coming off the goal, Wilkes-Barre kept control of the play, but the Devils slowly started to tilt things back in their direction. After a good shift, Mattias Tedenby drew a penalty when he was cross-checked in the back. The power play started off nicely for the Devils, but they couldn't get any shots or much pressure. Things would turn in their favor, however, after the teams returned to even strength.

Steve Zalewski collected a puck in the neutral zone and started a rush up ice. He passed the puck up to Joe Whitney who entered the zone and carried up the flank. Whitney made a sweet pass through the middle to find Bobby Butler streaking down the backside. Butler one timed the puck into the somewhat open net, and the Devils had tied the game, 1-1. The Devils would have to kill one penalty of their own, which they did, before the game went to intermission tied 1-1. The Devils were trailing in shots after one period, 12-5.

The second period began remarkably well for the Devils. On their first shift of the period, Josefson picked off an outlet pass from Joe Morrow to Phillipe Dupuis near the red line. He carried the puck into the zone, and fired a perfect cross ice pass to Harri Pesonen who blasted home a one-timer for the goal. The Devils had a 2-1 lead on their first shot of the second period.

Not satisfied, the Devils decided to make it two shots and two goals. This time, Steve Zalewski picked up a loose puck in the WBS zone, and threaded a pass, I think, through the legs of Joe Morrow to find Butler for another backdoor one-timer.

The wide open offensive onslaught that was the second period of this game continued. But, unfortunately, the next goal would go against the Devils. The forwards were out on the ice for a long shift, and Urbom got caught up ice a little bit on the play. The Penguins were able to take advantage of the numbers by passing the puck effectively and firing a one timer from the right circle past Kinkaid.

Next, the Devils got back into a trend that had plagued them earlier this season - taking back to back penalties. Josefson went off for a trip, and then just after a really strong kill, seconds later, Kelly sat in the box for slashing. Fortunately, this time it did not hurt the Devils, as they were able to kill both penalties. In fact, they did one better - they used the second penalty to extend their lead with a shorthanded goal. Bobby Butler, who was already having a great game, picked off a mishandled puck from Trevor Smith and took it all the way down the ice on a breakaway. His shot deflected off the body of Brad Thiessen and into the back of the net. It was both a shorthanded goal, and a hat-trick for Bobby Butler. This was the first Devils hat trick since Joe Whitney against Springfield in January of 2012.

At this point, the game sort of began to turn into more of a brawl than anything. Dan Kelly absolutely lit up Dylan Reese near the half boards with a good, clean hit. The Penguins responded by taking two high sticking penalties in close succession. On the second of the penalties, Tangradi high sticked Darcy Zalac and then basically went down the line looking for a fight until he got to Dan Kelly, who happily obliged.

The Devils had an extended 5-on-3 sequence, and despite hitting the post 3 times, could not score. Shortly afterwards, the Penguins made it a 4-3 game, as no one on the Devils covered Jason Megna on an odd man rush.

The third period was basically just a bunch of fights wrapped around two Devils goals. First Darcy Zajac pummeled Bobby Farnham. Then, shortly after, the Devils were able to expand their lead. Bobby Butler carried the puck down low, and all of the defense flocked to the guy who had 3 goals on the night. Butler dished to Zalewski who was up by the top of the circles, and Zalewski fired a shot past Thiessen.

Butler, not satisfied with just a hat trick, decided to add another goal. Pesonen got the puck down low behind the Penguins net, and he found Butler out in front. Thiessen denied Butler on his first shot, but the rebound came back, and Bobby was able to collect the puck on his backhand and rip a backhand for a 6-3 lead and a four goal game. This was the fourth 4 goal performance in Albany history, as Butler joined David Clarkson, Matt Halischuk and Chad Wiseman in the Albany record book.

The rest of the third period was just really a succession of fights. Almost every other play it seemed someone else was fighting. First Zalewski faced off with Dominik Uher. Then Uher fought Darcy Zajac after his previous major penalty expired. A few minutes later, McKelvie was hit hard, which lead to both Sestito and him fighting at the same time (in separate bouts, of course). Just when you thought this was the end, it wasn't. Dan Kelly added his second fight of the night, as Keith Kinkaid was run into and Kelly wasted no time in defending his keeper. Shortly after, the third period expired, and the Devils were victorious ,6-3, in a very entertaining contest. 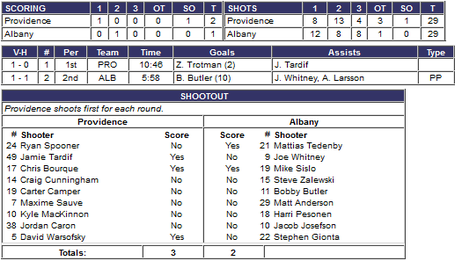 All stats taken from theahl.com and echl.com 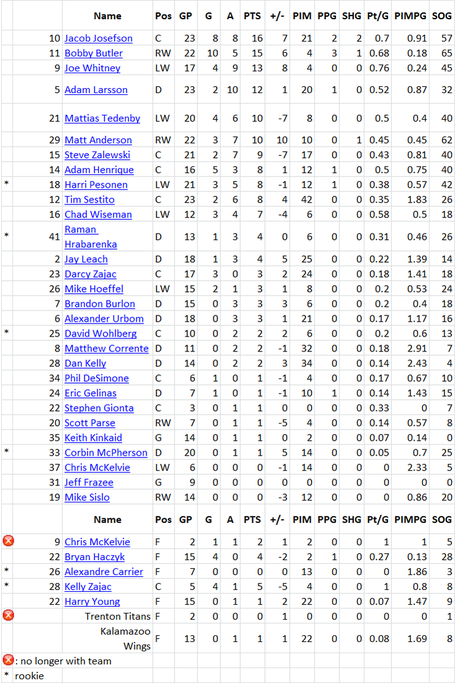 As always, Tracey has some great photos of the Albany Devils, as well as recaps of all this past week's games over at Thoughts Inside the Box.

Thanks for reading this week's brief Roundup. Please leave your thoughts and comments about Bobby Butler's goal explosion, the injuries on defense, the emergence of Eric Gelinas over the last few games, and all things Albany Devils in the comments section below.