It’s prospect update time! After the jump we'll look at statistical updates, how the system goalies are performing utilizing the even-strength save percentage process I developed last month, and review some of the more important news for the organization. 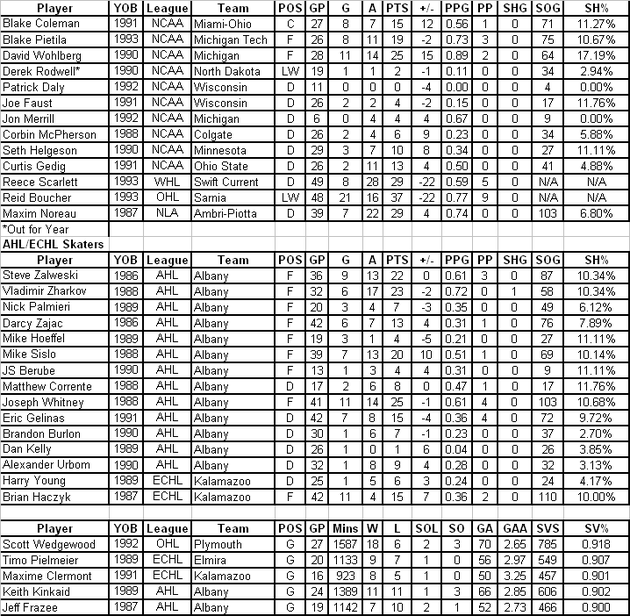 About a month ago, I attempted to develop a way to estimate the even-strength shot percentage of the goalies in the AHL and other leagues. You can read that article here. To explain the methodology again let me quote myself (which is always fun):

To try and figure out a general even strength save percentage I looked to the NHL statistics as a guide and looked through the NHL.com stats page that breaks down goaltender shots against by each particular situation. I then found the average proportion of power play shots (PP Shots) against the number of total shots a goaltender has faced. I used the statistics for the top 30 goaltenders in the league to find the proportion/rate of shots faced on the power play. Rates varied here from 14% to 21% for each individual goaltender, with 17% roughly being the average. Applying two sets of power-play shot percentages (17% as the average and 21% as the high point) to the totals of goalies Jeff Frazee, Keith Kinkaid, Maxime Clermont and Scott Wedgewood, would result in the below ADJ ES Shot % or the estimate of even-strength save percentage each goalie 'could' have.

One big takeaway from the numbers above is the fact that Maxime Clermont's .900 save percentage is an unfair representation of his abilities right now. Normally when a goalie is in the ECHL you are hopeful for better save percentage/goals against averages since the league isn't filled with that much talent. But when you look through the box scores, you see numerous special teams goals that Clermont has let up. Whether or not those shots should have been saved are of a concern to me, but I think Clermont is playing much better than his numbers indicate.

Another takeaway is wondering how much better the Albany Devils would be right now if they had a league average penalty kill. Their special teams is ruining their shot at a playoff birth.

Scott Wedgewood finished January with fantastic numbers. He went 5-1 with a 1.17 goal against average and a .965 save percentage. Oh and he added one shutout for good measure.

I think overall you can look at the four goalies that are in the organization (or in Wedgewood's case, will be) and be pleased with their play so far this year. That said, that statement is not an endorsement of any of them to be the starter or even the back up in New Jersey next year. Most of them still need development time before taking on such a role. How much time though? Well, next week I will look into that a lot further.

As a preview, chew on this for a while. Right now Jeff Frazee (after leaving Minnesota of the NCAA early) has played in 147 AHL games. NHL All Star Jimmy Howard (who also developed through the NCAA path) played 186 AHL games before becoming a NHL regular. This is not to say Frazee equals Howard. This is to say that developing prospects equals patience.

Urbom Impressing: Pete Dougherty of the Albany Times Union had a nice article on Alexander Urbom which ran yesterday. I was most impressed by the quotes from coach Rich Kowalsky:

"Last year he started in the NHL, and maybe it wasn't the best thing for him at the time," Devils coach Rick Kowalsky said. "He maybe thought he should have been there. He came in (this season) with a different attitude, a totally different mind-set, and it's been great."

"Because of our (lack of) depth, we've probably overused him a bit," Kowalsky said in regard to Urbom's rookie season. "He's been on the power play. Not to say he shouldn't play the power play, but it results in too much ice for a 19-year-old. As a result, he ended up playing tired and maybe trying to do too much."

Urbom's addition to the AHL All Star Game is a nice reward for a very solid second professional season. Devils fans should remember that Urbom is still young and developing, so we should not give up too quickly. Only a handful of defensive prospects from the 2009 draft (mostly 1st round picks) have even played in the NHL, so let's be patient with Urbom's development.

Brodeur Bobblehead Night Creates Record Crowd for Albany: Over the weekend Albany had 8,194 fans show up for a game at Adirondack. That's almost 2.5 times their normal crowd! Great news for Albany as they will need all the support they get as they make their attempt to return to the AHL playoffs. They are in a fight with seven teams who are all within striking distance of the last two playoff spots in the AHL Eastern Conference.