Analysis of The New Jersey Devils Lack of Goals

Share All sharing options for: Analysis of The New Jersey Devils Lack of Goals

The Devils struggled into the All-Star weekend with a lack of scoring. While the NHL is on pause for some skills competition, Peter DeBoer has some thinking to do. He can start with questions like: How do we score power play goals? What happened to our penalty kill? And how can I get my top players to score more at even strength? The players should be able to recoup and refocus on hockey since there is not a single New Jersey Devil participating in this weekend's events. In my opinion, if the Devils are trying to ship out Parise for draft picks and what not, it would have been nice to have him show off in the all star game and hopefully whet the appetite for a few more GM's.

However, this post isn't to speculate on Parise, but to figure out where the Devil's scoring has went. In the last three games, the Devils have put up one goal each game. Now, three games isn't the end of the world for a scoring drought, but its concerning. After the jump I'll break down the scoring trends for our top five goal scorers and hopefully shed a little more light on the situation.

Let's throw out some numbers to get your mind thinking about the Devils and shooting. This year, the team has taken 1331 shots in 48 games, averaging 27 shots a game. Not shabby in the NHL. With all these shots, the Devils have lit the lamp 129 times, good for 18th in the league in goals for. For those of you who did the math; the Devils are shooting at 9.69%.

Theoretically, this means the Devils need to take 31 shots a game to get to that magical three goal mark. The funny part about this number, it's the exact number of shots we took against Boston and Philadelphia in the last two games. So we can either say Ryan Miller and Ilya Bryzgalov are good (meh), Devils scorers have cooled off (more on that coming), or that the shots taken aren't quality scoring chances. Ryan Miller was on his game a few days ago, Bryzgalov on the other hand was alright. Have the Devil's just been peppering on shots once they get into the offensive zone and not set up scoring chances? You tell me.

The Devils are scoring at a poor rate in January. DeBoer thinks the Devils are an "elite team", but no elite team in the NHL scores 2.4 goals per game. One idea on why this is happening is that the Devils may be concentrating on not allowing any more shorthanded goals. This should be mainly on the defense, but perhaps DeBoer had a conversation with Lemaire about how to play a more defensive oriented game? There have also been a few slight injuries, but nothing that should make a dent in goals per game like this. The Devils have officially cooled off in my mind.

I took a look at our leading goal scorers in order to see if there were any answers there. I graphed their goals over all 48 games and added a linear trend line in order to show a normal scoring pace this season is for each player. If the player is over the linear line, they are scoring over their season average and if they are below they are scoring less than average. Below is a chart of the last ten games and the goals these players have scored. (The lines are color coded and the green and red lines are on top of each other, sorry!) 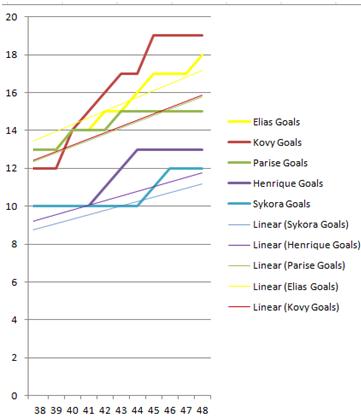 The top five goal scorers for the Devils, in order, are Ilya Kovalchuk (19), Patrik Elias (18), Zach Parise (15), Adam Henrique (13), and Petr Sykora (12). The only player under the "average scoring lines" is Zach Parise. Maybe the talk of trades and/or signing with the Devils is affecting his on ice production. (Remember, he is just a human.) Ilya Kovalchuk on the other hand is scoring way above his pace for the season thus far. The others are slightly above their pace. So what is going on with the Devils and their scoring?