Its prospect update time! In addition to the statistical updates, after the jump we'll look at some of the more important news for Devils prospects. 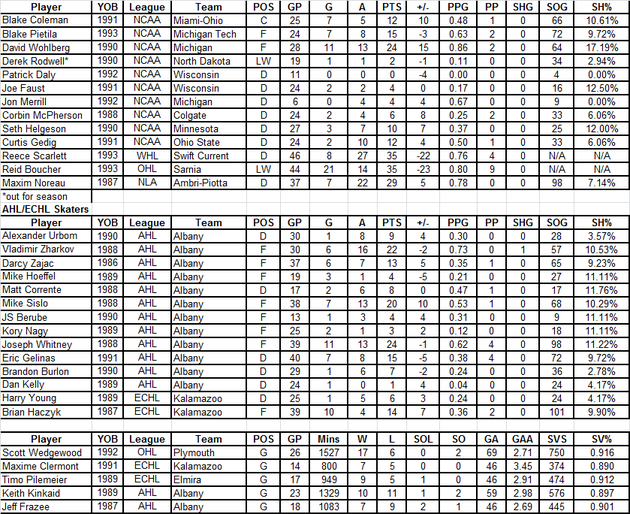 I selfishly hope that Wedgewood's Whaler team is eliminated from the OHL playoffs early so that he can get some starts at the AHL level under his belt.

Merrill has some positive press: There was a barrageof Jon Merrill articles last week. This one from Dave Starman over at USCHO.com has some must read quotes from Merrill on his return from suspension and the other, featured on NHL.com quotes Ohio State men's hockey coach Marc Osiecki (he himself known as a defensive guru of sorts) calling Merrill the best defenseman in the NCAA.

I have two quick notes about the articles. Starman's article claims 'Merrill wasn't suspended at Michigan' when he went to play at the World Junior Championships. Yes he was. It was an indefinite suspension as confirmed by Red Berenson here when he was reinstated. And regarding Osiecki's quote? I am inclined to think Justin Schultz of Wisconsin is the best defenseman in the NCAA.

Albany fighting for first: Albany is currently in 4th place in the AHL Northeast Division with 44 points. However they are only two points behind division leading Connecticut Whale (home of Sean Avery, Wade Redden and future home of Brad Richards) with a game at hand.

Stupid Demotions: To help make a push for a divisional lead, Albany added some offense to their team with the arrivals of Mattias Tedenby and Steve Zalewski after both players were demoted this past weekend.

Zalewski played well in his time in New Jersey and if this demotion is indefinite, I have to question the thinking of Pete DeBoer and Lou Lamoriello on the structure of the 4th line. If the goal of the 4th line is to try and generate offense and more importantly NOT get scored upon, why are Brad Mills, Cam Janssen, Ryan Carter and others around? If you have a poor defense that has trouble getting the puck out of their own end, wouldn't you want a player like Zalewski who was very good at helping carry out the puck to the neutral zone?

I am not sure how I feel about the Tedenby demotion. On one hand he wasn't getting enough ice-time and at times would make bad decisions that would hurt the team defensively. On the other hand, he played adequate enough for Jacques Lemaire last year to receive sufficient ice-time, wasn't exactly playing with good playmaking forwards, and likely played with fear of being benched for every little mistake he made. It would also have been nice for him to get some time to play with Jacob Josefson. Although it's probably best for Tedenby to get some consistent ice-time in Albany, I can't shake the feeling that he didn't get a fair shake this year.

Best of Luck, Joe Sova: Sova, along with the Devils 4th round pick in 2012 (they will still retain the 4th round pick they received from Toronto in the David Steckel trade) was traded to Carolina for LW Alexei Ponikarovsky. Sova, signed out of Alaska-Anchorage last season, plays a good offensive game while still working on his defensive skills in both the ECHL/AHL this year. Sova average 0.28 PPG during his time in the AHL after posting 0.50 PPG at the NCAA level. He was a victim of a numbers game early on this year that saw him sent to the ECHL because the Devils felt the need to have both Jay Leach and Peter Harrold on the AHL roster along with players like Mark Fraser on the NHL roster.

That said, I am pleasantly surprised the Devils only had to give up a 4th round pick and a player for Ponikarovsky. Despite only having 15 goals in his last 127 NHL games and whose best attribute seems to be the ability to almost score/fire the puck directly at the goalie's chest, trade deadline history gives you the impression that Poni might have fetched a 2nd round pick for Carolina as the deadline approached. While I think Sova had potential, I can understand that there were a number of prospects ahead of him on the depth chart and it's probably better for him to get a better look somewhere else.

With the departure of Sova to the Carolina organization and Peter Harrold to the NHL club, it's likely you will see defenseman Harry Young be recalled to Albany from the Kalamazoo Wings of the ECHL. If that happens the Devils will not have any player who is signed to a SPC in any other places but Newark and Albany.