The holidays continue to impact the number of games played by the AHL, NCAA, CHL and European leagues. After the jump I update statistics for some CHL/AHL players, take an early look at the trade deadline and see which might be on the Devils radar in a few months. 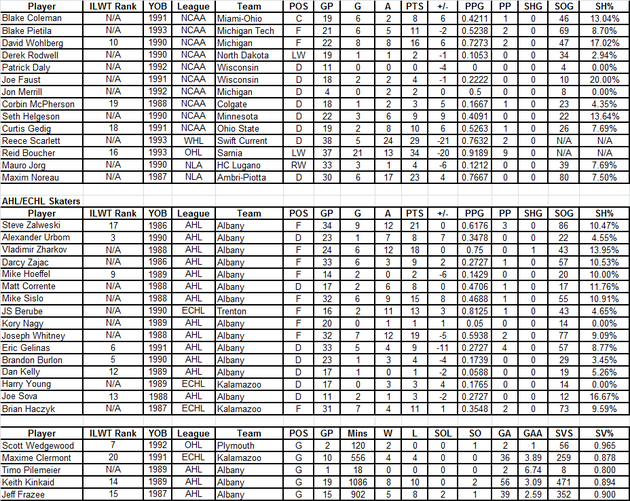 I often wonder if trade and roster speculation are the best part of being a sports fan. Trades sometimes offer a new, fresh start. It allows us as fans to ponder the 'what if' and speculate on the team's new potential. Unfortunately trades don't happen that often and the blockbuster trades of years past have decreased with the advent of the salary cap and entry level contracts. That said, the NHL trade deadline, only 56 days away (the trade deadline is 3pm on February 27th), still has a flurry of activity that is exciting for the hockey fan.

Last year the New Jersey Devils were in an unfamiliar spot when the trade deadline came about. They were sellers. Moving out Jason Arnott and Jamie Langebrunner for picks/David Steckel (who himself was dealt for a pick) the Devils added some ammunition for themselves for the 2012 trade deadline and/or the 2012 draft. Because of their manuevering the Devils have 8 picks in the first 5 rounds of the 2012 draft. With additional picks in the 2nd round (Washington's pick via trade for Arnott), 4th round (Toronto's pick via trade for Steckel) and 5th round (Calgary's pick as compensation for signing Brent Sutter via trade for Pierre-Luc Loutorneau-LeBlond), the Devils have a few assets to dangle to sellers at the trade deadline. The Devils, as evidenced by the chart below, also have the most picks of any team through either the 4th or 5th round. 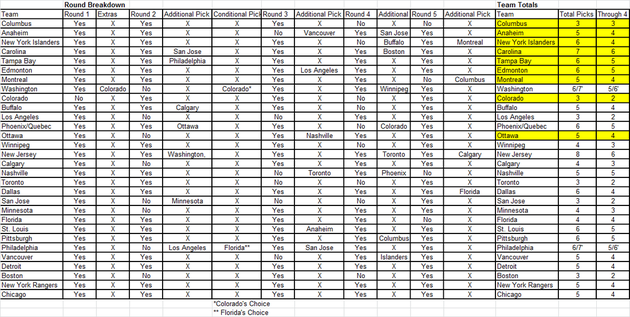 (Note that I cut off the listing at the 5th round for two reasons. One, was space concerns in putting this grid together. The second, and of more importance, was the idea that the type of player a team would get for a 6th or 7th round pick isn't that impactful. Also there are still two conditional picks in the second round that have yet to be finalized. That will affect the pick totals for the teams involved, Philadelphia, Florida, Colorado and Washington. That's why Philadelphia and Washington have two options under the total picks they have.)

I utilized Wikipedia's 2012 NHL Entry Draft page and put together the grid above to see which teams had an abundance of picks, and which teams were lacking picks. Again, the Devils are at the top of the list when it comes to total number of picks while Los Angeles, Colorado, Toronto and Columbus had only about 2/3 picks within the first 4 or 5 rounds of the draft.

With the extra picks the Devils have, they are poised to be one of the more active teams at the trade deadline as they look to return to the playoffs after a year's absence. Who is available though? That is the question that's toughest to answer this time of year. There aren't many teams who will admit that their season is lost and sell off some assets. That said, we can take a look at the standings and guess which teams will be sellers as the deadline approaches. Above, I highlighted those teams that I think will be sellers. This will change over the next two months but I wanted to get a sense of what players might be available for the Devils.

I looked over the rosters of the teams I thought would be sellers at the trade deadline, their expiring contracts (I think it's safe to assume that Lou Lamoriello and company don't want to acquire any player with money owed to him beyond this year) and then tried to guess/project which players might be available and what type of value their current teams would ask for in return. I also tried to think about what Lamoriello might be looking for in terms of depth. Lamoriello always likes to acquire a defenseman for some extra depth, he may want to acquire a forward for the third line and I think it would make some sense to acquire a 3rd goaltender as an insurance policy in the event that 39 year old Martin Brodeur or 38 year old Johan Hedberg face injury troubles. So let's see what players the Devils could be targeting with those extra picks. I also added some old friends on the listing, just to see if you were paying attention.

Out of the teams above the ones that you would potentially have trouble dealing with are the Islanders, Hurricanes and Avalanche because of how close they are to the salary cap floor. That makes trading for players in expiring deals like Brian Rolston, Milan Hejduk and Tuomo Ruttu a potential headache. You also have some players like PA Parenteau and Bryan Allen that teams may want to hold onto so that they can negotiate a new deal in the off-season when the teams will have two months of exclusive negotiating rights.

Goaltending Trade Targets: Would the Devils hold onto three goalies on their roster for the remainder of the season? I don't know if they will, but I think they should. Nearly 20 years in the league have taken its toll on Brodeur and if he should fall again to injury I don't think anyone would be comfortable with a Hedberg and Jeff Frazee/Keith Kinkaid tandem in the playoffs. Nabokov and Boucher aren't exactly spring chickens but the added depth is something I think I would like the team to address if they are expected to make the playoffs.

Defensemen Trade Targets: Right now, the Devils are playing with house money with Bryce Salvador. Despite playing in every game so far this season, he is still a risk to miss some time with injuries. Anton Volchenkov gets bumps and bruises that knock him out for a few games every so often. Acquiring a defenseman like Pavel Kubina, Hal Gill, Francois Beuchemin can help stabilze the depth of the 'defensive defensemen' the team has. Kubina has also played extensively with Kovalchuk in Atlanta, and can help stabilize the power play. Although, if available, I wouldn't mind somehow acquiring Bryan Allen or Matt Hunwick. Both are having very underrated defensive seasons for their respective clubs.

Forward Trade Targets: This is an area that I think the Devils have a solid foundation that they are working with. That said, they have Travis Zajac still working his way back into shape from injury, Jacob Josefson an injury risk and players like Petr Sykora who are playing a bit over their heads. A solid veteran addition like Saku Koivu or Milan Hedjuk could have a Neal Broten type of impact during a playoff run.

As an aside, I made sure I stayed away from any potential 'unicorn deals' (like Mattias Tedenby and a 2nd round pick for Shea Weber) but part of me thinks that the Lamoriello makes a big move this year. This is all speculation of course but considering this could be the last year in the Devils' careers of Zach Parise and Martin Brodeur, the need for playoff revenue for the financially strapped team and assets to move (picks, prospects like Jon Merrill),perhaps Lamoriello surprises all of us with another trade like the Kovalchuk trade from February of 2010. A big time acquisition would be a nice retirement gift for Brodeur if this is in fact his last season.

It was a light schedule for the NCAA coming off the Christmas holiday. Only a few teams were in action, one of which was Colgate and Devils defensive prospect Corbin McPherson. McPherson, the senior 'defensive defenseman' tallied his first goal of the season and first since 12/30/2010. I was alerted to the 'Unit' (that's a nickname McPherson has up at Colgate) accomplishment thanks to Colgate radio play-by-play man John McGraw who tweeted this to me on Friday night. Thanks to John for the heads up.

With the World Junior Championship's medal round almost upon us, it seems that Devil's goal prospect Scott Wedgewood might be the #1 goalie as he was in net for the Canadians 3-2 win over the disappointing USA squad on Saturday night.

Jon Merrill finally has seen some game action this year, playing in 4 games for the US team. He has notched 2 assists and didn't look that rusty after a long layoff. (Note that in the stats table above, I utilize Wedgewood/Merrill's stats from the WJC tournament.)

Next week's blog post will have 100% less Mauro Jorg. He was recently demoted to the 'B' league of the Swiss Hockey League. Not sure if I noted this before but while at HC Lugano, Jorg was teammates with former Devil Rob Niedermayer.

That's it for this week, leave any questions or comments below. Thanks for reading.