Its prospect update time! After the jump we'll look at the point production of defensive units across the NHL, and of course get all the updated stats for Devils prospects. Click the link for more. 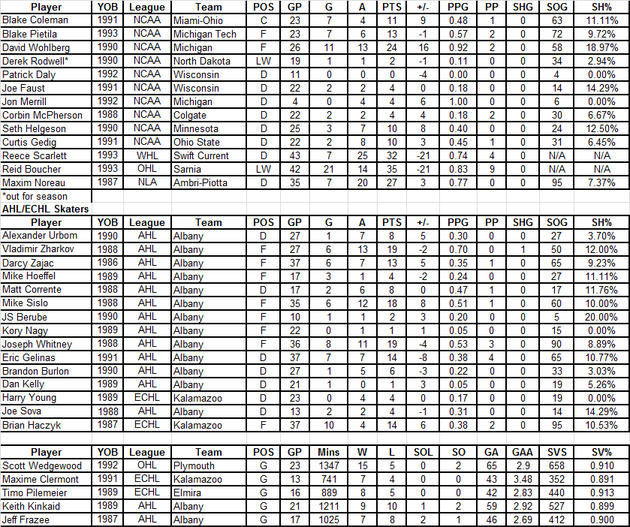 Since the mid-part of last decade the Devils have been severely lacking in point production by their defensive unit. Consistently in the bottom third of the league, the lack of production by the defensive core puts a lot of pressure on the forwards to be the group to generate offense. Point production is a not a 100% guarantee of success by a club, but as evidenced by the listing below, it certainly is a good indicator.

In the post-lockout NHL needs teams to have a strong mixture of playmakers and responsible defenders to compete. The Devils are currently able to do so, despite having a more defensive minded unit. Hopefully the Devils develop a more healthy balance in the future. One of the benefits to following the farm system so closely is that you know offensive help is on the way. Whether it's Jon Merrill or Eric Gelinas, the Devils have some prospects who can generate offensive opportunities.

In the second half of the year, I am hoping the points production from the defense can increase. With a more comfortable Larsson, the return of Greene and Foster being entrenched at the point on the power play, the Devils blue-line should produce more points than it did in the season's first half.

The Michigan Wolverines are 3-0-1 since the return of Jon Merrill, beating one of the top teams in the nation, Ohio State, by a combined score of 8-1 in their two game series over the weekend. Michigan has outscored their opponents 14-5 over the course of the four games since Merrill's return. Merrill has four assists in four games with a plus six rating. Think the Wolverines missed him?

While his total numbers don't look great, Maxime Clermont went 2-0 over the past week with .969 save percentage and a 0.96 GAA. The streaky Clermont, could be in store for a big second half in the ECHL.

With a win over the Adirondack on Monday afternoon, the A-Devs with 42 points are now in a three way tie for second in their division. They are two points behind the Connecticut Whale (home of Wade Redden, Sean Avery and future home of Brad Richards) with a game at hand.