Share All sharing options for: Devils Goaltending Stats at 42 Games

The Devils have just passed the mid-way point of the 2011-2012 season. There is much to discuss about this team: their strengths, their weaknesses, their inconsistencies, etc.. One major talking point has been goaltending. This season, head coach Pete DeBoer had many questions regarding the Devils situation. Would veteran goalies Martin Brodeur and Johan Hedberg share the helm? Would the future Hall of Fame netminder go back to his days of taking the majority (not 70-75 games) of starts.

I was responsible for the goaltending portion of this season's ILWT preview. I stated Marty would get close to 60 games, even 65 with Moose getting the rest. I also stated that Marty starting both games on back-to-backs should be held to a minimum, which they have. DeBoer has stated he will use both goalies in this instance. Around the end of November, I compared both Marty and Moose. At that point, they played in about the same amount of games. I wanted to see if they would continue to share to helm.

Well at roughly the midpoint of the season, how has DeBoer used his goalies? He was only faced with an injury dilemma in November when Marty was injured with a sore shoulder. How have each of the goalies been in consecutive starts or more? How have they been in a more sharing role (back and forth)?

There's more after the jump including a poll.

Here are the goalies basic stats:

At this point, Marty has started a lot more games than Hedberg recently. Since December 1st, Marty has started 14 games whereas Moose just 5 (this doesn't include the 3 games in relief). Marty has started in 2 or more games in a row on 5 separate occasions to Hedberg's 2 (one being the lengthy array or games when Marty was hurt). At a point in November where it possibly looked like both goalies may share the Number 1 role, Marty looks to be taking the role.

Here's a look at the Devils running save % for the year: 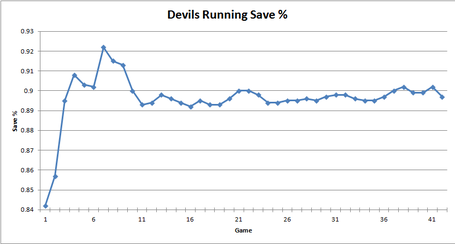 As you saw from Kevin's PDO post yesterday, that stat is rising (up until last game). Since this running save % related to that, you can notice the slight increase in the last 5 of so games. Last night's game was a big hit. The save % has been around the 0.900 mark all season. Is it safe to suggest it will stay like this? Since PDO tends to even out at around 1000, it may rise, but the problem is when. Maybe in the last 5 or so games, it has begun?

In terms of recent trends, Marty has gain the advantage of starting in consecutive games or more. Moose has has the advantage of rest. They have been sharing back to backs. Should they switch this role? Is Marty getting too much?

I'm really not sure what they should do. Yes Moose has the better starts with less games. He's getting more goal support and has the advantage of resting. However he's only played in 6 home games. Marty and Moose have both bailed out the team with some stellar saves, yet at the same time have let in some softies. Would this even chance if they changed their roles.

I would expect no, and I wouldn't expect DeBoer to change any of that and keep on with this set up. There aren't many back to backs but there are many games schedule in the coming two months including a 3 games in 5 days and 5 games in 10 days. Thus Moose may get an extra start here and there.

Now for the poll: