A Look at the Devils' PDO At the Halfway Mark

Share All sharing options for: A Look at the Devils' PDO At the Halfway Mark

PDO is one of my favourite statistics. For those not familiar with PDO, it's the combined on ice shooting% and on ice save% (at 5v5). PDO is a useful tool when it comes to assessing how a player will perform, because shooting% and save% are usually luck based. If a player's PDO is over 1000, it usually means they're experiencing good luck and are less likely to perform at the same level they are performing at. If a player's PDO is below 1000, they're experiencing bad luck and are more likely to play better later on.For the individual percentages, on ice sv% of 91 is average, while on ice sh% of 9 is average, although individual percentages may have more to do with the player's skill rather than luck. Rather than looking at individual PDO, I'll take a look at the team's PDO over the first 41 games. 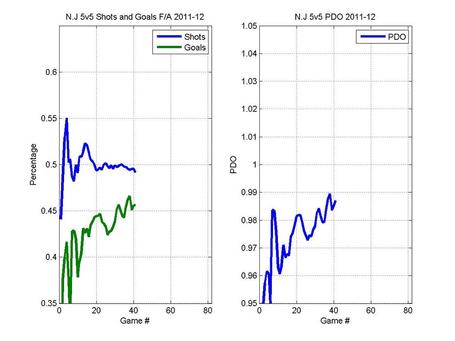 The two charts above are representative of the Devils performance. The one on the left isn't relevant here, but the other chart, the one on the right is the one we're interested in. This PDO chart is one of the newer features on Behind The Net, and it is a visual representation of the Devils total PDO over the season. The data on the team's PDO over the first 41 games (and counting) can be found here. As of now, their PDO is 987.

From the Data, I'd like to note that the Devils have never had a PDO over 1000 (or on the chart, 1) once this season. This is pretty interesting and for me, somewhat unsurprising. The low PDO interests me because they've managed to succeed so far this year despite not benefitting from luck. It also interests me because the Devils recent success seems sustainable- their PDO has been nearing 1000 over the last couple of games. Their record in their last 10? 6-3-1.

As for the part about it being unsurprising, the relatively low PDO has to do with the Devils giving up more goals at even strength than on special teams. In terms of Special teams goals against, they've recorded 25 STGAs (13 PPGA, 12 SHGA). There are many teams who have given up more goals against on the PK alone. On the other hand, they've given up 83 goals at evens, which is near the bottom of the league in that category. Combine that with the team's ability to prevent shots, and you have a recipe for low save percentages. While they lack the quantity of shots against/goals against like Ottawa does, they feature a smaller sample size. In essence, the Devils lack of quantity is made up with similar quality.

From looking at the team's PDO over the first 41 games, I don't think the Devils problems right now are based on their play at even strength. The goaltending has been better over the last few games. Their shooting % at evens (8.5%) is about average.I think looking at the team's PDO this season shows that they aren't a bad team, but they aren't an exceptional team like the Bruins (team PDO of 1051). I don't think there's a lot to worry about the team's performance at even strength right now. Their performance 5v4 on the other hand...