Do the New Jersey Devils Really Need a Great Start to the 2011-12 Season?

Share All sharing options for: Do the New Jersey Devils Really Need a Great Start to the 2011-12 Season?

In the Talking Red interview with E.J. Hradek, one of the larger points Hradek made that David and I agreed with was that the New Jersey Devils would need to do well at the beginning of the season. This was a point I figured made sense. In my mind, it's easier for a team aspiring to make the playoffs to start out strong and rack up plenty of points than it is for a team to start off poorly and rack up points trying to make up ground. Last season's Devils team is a perfect example of that idea in effect. The Devils were absolutely awful in the first three months of last season, so much so that a vastly more successful second half of the season couldn't salvage it. They needed a lot of help just to have a shot at reaching the eighth seed; that help never came; and ultimately the Devils were doomed to miss the post season for the first time since 1996. In order to avoid that, it seems sensible to say that the Devils have to do much better than just getting 9 wins by Christmas.

However, now that I think about it, I want to see whether that's really true. I've looked back at the history of the New Jersey Devils and marveled at their past records. Prior to last season, the Devils were one of the most successful teams in the regular season. They've only missed the playoffs twice since the 1995 lockout. The team has earned at least 100 points in 11 out of the last 15 seasons. The Devils finished first in the Atlantic Division 9 times in the last 15 seasons. Sure, the regular season triumphs didn't always lead to similar victories in the playoffs. These accomplishments are more impressive when you consider the sheer amount of personnel changes from season to season. No wonder others in the game today look to the Devils as a model franchise - last season notwithstanding.

Given the Devils success in many of those seasons, surely, they had to do well at the start of each season, right? In researching the issue, I've learned that's not really the case. Please continue on after the jump.

All of the following data came from ShrpSports, which has a historical, day-by-day history of the NHL standings. It's an excellent resource if you want to recall a team's standing situation for a particular date in the past. I recorded the Devils' record, point total, and position in the Eastern Conference at the end of October and again at the end of November. I decided to use both months to see how the Devils progressed through the first quarter of the season. While I could have gone back to the beginning of the Devils' franchise with ShrpSports, I stopped at 1995-96 since that was the first season the league went to 82 games to keep the season length consistent. That provides 15 seasons worth of records. Lastly, I calculated the points per game rate for the Devils since it varies from season to season in how many games the Devils played at the end of each month. Here are the Devils' records at the end of October and November from 1995-96. 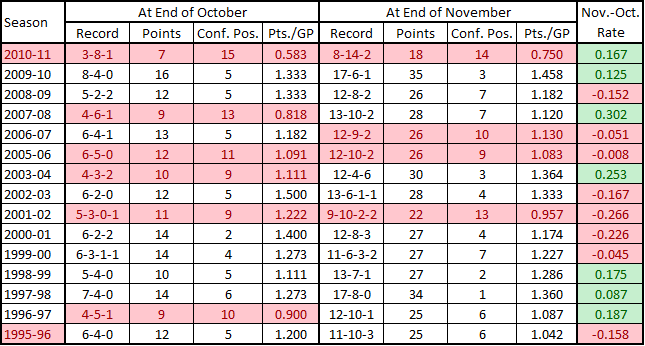 Needless to say, the Devils haven't always been a team that got hot right away. At the same time, they rarely were actually bad. They have had some very good October seasons on their own; but they have never lead the East. While they've had some solid records like they did in 02-03, 08-09, and 09-10; other teams' performance kept them out of the upper echelon in the league. In fact, 6 out of 15 times they finished the month outside of the top eight spots in the East. That's not a majority, but it isn't rare either. What is a little more rare is that the Devils really fell flat on their face. In 3 out of these 15 seasons, the Devils put up a points per game rate below 1 in October. That's pretty bad, but in two out of the three, the Devils did turn it around eventually in the season. The exception? Well, last season.

Now, how do these records at the end of November compare with how they finished the season? Let's look at this chart. 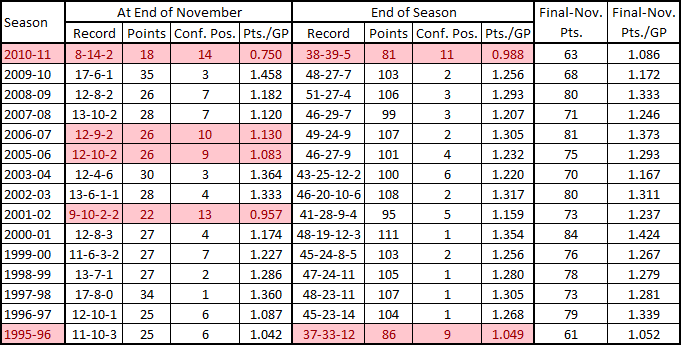 As a quick aside, marvel at all of those 100+ point seasons. Then notice that in some of those seasons, they still finished outside of the top 3 in the East. That's how it worked out - some point totals in some seasons would be good enough for a high spot and it would be a different case in the next season.

What has been consistent is that the Devils have achieved a points per game rate of at least 1 since November of each season. In fact, only twice did the Devils have a rate below 1.1 points per game; the two seasons where they didn't make the playoffs: 95-96 and 10-11. Given that point requirements shift from season to season, it's hard to pinpoint a post-November rate necessary to make postseason. 1.1 seems like a nice rule of thumb, but that's dependent on how the team did in the first two months.

What is clear is that out of the 6 times where the Devils were below eighth at the end of October and the 4 times they were below eighth at the end of November, only once did they go on to miss the playoffs. That would be last season. It suggests to me that a weak start to the season is disappointing, but not necessarily a deathblow to the Devils' chances at making the playoffs. Last season was an exception, of course. That's because Devils were far worse at the end of October and November in terms of points and points per game than they have been in the last 15 years.

Now, let's compare point-per-game rates between the end of both months and the rate after November across each season. 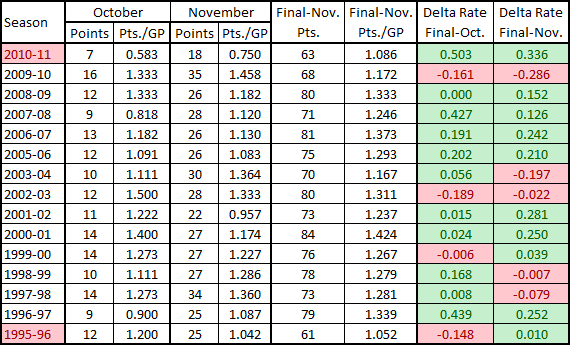 In some of these seasons, the Devils really turned it up. In 1996-97, the Devils didn't have a strong start but they brought it to the rest of the league on their way to a 104 point season. The 2005-06 season featured a massive comeback by the Devils - something I'll cover in more detail in a future post - and that drove the points per game rate up after both points. 2006-07 was another example, though it didn't feature a ridiculous streak during the season. The Devils in 2007-08 clearly turned around after a poor October to finish high in the East. Then there was last season, where we know how much better the team was in the second half of the season. What we saw matches up with the results.

There were two seasons where the Devils did worse in terms of point per game rate with respect to the first two months of the season. In 2002-03 and 2009-10, the Devils were so strong in the first two months that the next five months couldn't measure up. They weren't horrid after November, the Devils still put up over 100 points by the end of the season in each season. They just couldn't maintain such a high pace. They would be examples of how a strong start can help; but they didn't necessarily slack off.

That all said, I wouldn't start proclaiming the Devils to be a post-November dynamo. The severity of the difference in rates does vary from season to season and in between the two points. It's happened enough to say it's not uncommon, though. I'd go as far as to say that the Devils don't need to be great in the first two months of the season; they just can't be absolutely horrible. It helps to be great, that is quite true. A great start makes it easier later on in the season, provided the team can keep up a good enough rate - even if they slip from it. The Devils don't need to be world-beaters right away.

However, the Devils do need to avoid just treading water around a point per game rate of 1 throughout the season as well playing like hot garbage. That's what happened in 1995-96 and ultimately they were on the outside looking in for the postseason - on the last day of the season, no less. While past history may show that the Devils don't have to be great early on to have a great season; they do have to be good enough to be in the mix and then press ahead as the season rolls on. The Devils have done that in most of the last 15 seasons, so I don't think it is unreasonable to think it could happen again.

These are my findings on how the Devils started the past 15 seasons. What do you make of them? What surprised you the most: the records themselves, the difference in rates, how the team did in October and November? Do you think the Devils really need a great start to the 2011-12 season to get back in the playoffs? Please leave your answers and other relevant thoughts in the comments. Thanks for reading.