The first prospect update of 2011-12 is now upon us! While there isn't much to report at this time, I thought this a good opportunity to catch up the happenings of the summer, look at who is new to the system and where they are playing this season and discuss expectations I have for a few of the New Jersey Devils prospects.

Well, the whole 2011 draft class. John recapped the draft back in June here and I added some thoughts here.

In the table below you will be able to see the school/team each of the Devils prospects are scheduled to play for this year. I've added birth year to my list so you have the ability compare point totals for various players realizing some point totals may be more impressive than others.

Note: As you can probably tell by the listing below I don't list every player in the system. If there are other players in the system you would like followed just list that player out in the comments section. 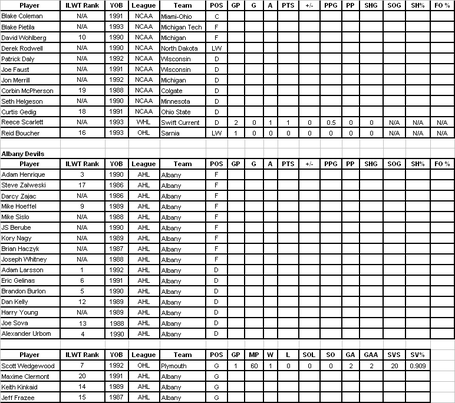 As most are aware Alexander Vasyunov passed away tragically during the off-season on a flight with the Lokomotive KHL club.

David McIntyre was dealt to the Minnesota Wild for defenseman Maxim Noreau.

(Unfortunately Noreau has signed in the Italian League, but still remains property of the Devils and will be a RFA when/if he decides to return to the NHL.  You can read my views on the trade here)

Reid Boucher, scheduled to play in the USHL for one season before fulfilling a committment to Michigan State University decided to de-commit and head to the OHL and the Sarnia Sting.  With potential top 2011 draft prospect Nail Yakupov, top 2012 draft prospect Alexander Galchenyuk, and not to mention 2011 Phoenix Coyotes first round pick Conner Murphy, Sarnia should make a deep run in the OHL playoffs.

One of the benefits to Boucher being drafted out of the USHL and now signing with a CHL team is that once the Devils sign him to an entry level contract he is available to play for the team's AHL affiliate at age 18/19. If drafted out of USHL, the AHL/CHL agreement is not applicable.

Maxime Clermont inked an entry-level-contract over the summer and is likely to start the year in the AHL or ECHL. While still eligible to play junior hockey as an overage player he is currently not on the Gatineau Olympiques roster nor is he rumored to be playing anywhere else at this time. I think an ECHL assignment would be the likeliest scenario here. That said, he is part of an organization with NHL goaltenders at the ages of 39 and 38 along with AHL goaltenders who have never played more than 50 games in a season (Kinkaid) or have been injury prone (Frazee). I expect him to suit up for 10-15 games for Albany this year.

Thoughts and hopes for the year to come for players in the NCAA:

Blake Coleman a third round pick from the Indiana Ice of the USHL steps onto a Miami-Ohio team (Andy Greene's alma-mater) that loses two dynamic scorers in Carter Camper (19g-38a-57pts in 39 games played)and Hobey Baker Award Winner Andy Miele(24g-47a-71pts in 39 games played). At 19, Coleman will be expected to hit the ground running. With his 92 points in 59 games last year for the Ice, I think it is realistic to expect a point-per-game campaign from him in his freshman season.

David Wohlberg returns to a Michigan team that lost top scorer Carl Hagelin to graduation. This season will be a test for Wohlberg to (1) show that he is more than a complimentary scorer on a good team and (2) that there are no lingering effects from the broken collarbone that ended his season last year. I am bullish on Wohlberg and see a Hobey Baker nomination in his future.

With Joe Faust and Patrick Daly the Devils have two defenseman on the Wisconsin Badgers roster. With the departure of Jake Gardiner there will be opportunities for defenseman to sieze a bigger role this year. Faust played sparingly last year but would seem to be first in line for more minutes. For an in-depth preview at the Wisconsin team head over to SBNation site Bucky's Fifth Quarter

Jon Merrill loses some defensive help (Brandon Burlon, defensive partner Chad Langlais) but that shouldn't stop him for continuing his solid play for the Wolverines. If he has another season like last year, I would be surprised if he decides to stay for his junior and senior seasons.

The division of games at the AHL level is Kinkaid-45, Frazee-20, Clermont-10.

Mike Hoeffel, if in Albany the entire year, notches 20-25 goals.

Alexander Urbom gets the call to the NHL about 1/5 of the way through the year and sticks with the big club covering injuries.

Over the course of the year I will provide some interviews with hockey folks who have actually seen these players play the games. I think this first hand knowledge and access is important for a few reasons, most importantly I am not just relaying stats and saying 'This guy is good'. That's just a bad approach. I want some teeth behind that sort of statement and you, the reader, deserves more than simple regurgitation of statistics you can ultimately find on your own.

The downside of this approach is of course not having a resource for every player. So while you may not see a Q and A with someone who watches Michigan Tech hockey and sees Blake Pietela it won't be for a lack of trying.

Thanks for reading and sound off below with any prospect predictions you might have for this season or any other comments you may have. Also feel free to use the comments as an ability to ask me a question about a prospect. If I don't know it off the top of my head, I will get you an answer...eventually :)