Despite Martin Brodeur winning multiple Vezina trophies, putting up great numbers and breaking several NHL records post lockout, the cast in front of him has slowly been getting worse and worse. The Devils lost many great defensemen post lockout- Scott Stevens and Ken Danyeko to retirement, while Scott Niedermayer, Brian Rafalski and Paul Martin to free agency.

While those guys were leaving, the Devils had to find someone who could lead the defense in the coming years. A few years back, names like Matt Corrente and Tyler Eckford popped up as some of the potential studs in the system, however neither really panned out- Corrente looks more like an average NHL defenseman than a top defenseman, while Eckford never got much of a chance, and now finds himself in the Phoenix Coyotes system.

Now however, through the draft, the Devils have managed to acquire several excellent defensive prospects. Adam Larsson, Jon Merrill and Alexander Urbom highlight these additions. While some aren't expected to make an impact right now- it's more of a testament to the team's defensive depth. As going into this season, they have several capable NHL defensemen as well as a few young defensemen who could potentially be part of the Devils down the road.

Going into last season, the question was whether or not Tallinder could do what Lou Lamoriello brought the big Swede in to do- replace the big minutes on the blue line left by the departing Paul Martin. While it did take him a while to adjust, Tallinder was one of the team’s more important players in the second half run. He’s not going to be used in nearly as much of an offensive role, but he should provide a decent option to face top opposition.  Durability is not an issue at all with Tallinder- he played in all 82 games.

Like Tallinder, Volchenkov was brought in last season- however, he didn’t have the same kind of year Tallinder did. Volchenkov missed most of the season with facial, neck and leg injuries as well as some games due to personal injuries and suspension. When healthy, he will make his Sacagaweas by adding a physical dimension to the team, as well as a guy who can take lots of defensive zone starts against top competition. He’ll be the guy that shuts down guys like Sidney Crosby, Alex Ovechkin and Claude Giroux.

Despite having a terrible season, Andy Greene was re-signed by the Devils to a 4 year deal this off-season. Greene struggled last season, however it had a lot more to do with having to constantly shuffle defensive partners, ending up being paired with defensive liability Anssi Salmela. Greene is a very good bounceback candidate- he should have a better season if he receives regular minutes with Tallinder, Volchenkov or Salvador. He had his best season (2009-2010) playing mainly with Salvador- so hoping that with the return of his defensive partner Greene might be able to put up 30 points from the blueline again and provide solid defense while eating up big minutes.

Salvador is often the forgotten man on the Devils blueline. He missed the entire 2010-11 season after suffering a concussion in the pre-season. His return to health did make Colin White expendable. The question with Salvador is whether or not he can return to game form. He hasn’t played a game in nearly a year- he’ll need to show whether he can still be serviceable- which is all the Devils need him to be. He adds some veteran experience to the team as well.

Fayne had an up and down season. While he didn’t play well in the latter stages of the John MacLean era, he was able to prove that he can offer something at the NHL level when Jacques Lemaire took over. While he was able to be good enough that Lemaire was confident enough to use him in a more important role. Fayne has proven he can be an NHLer. The problem is, where does he play? Does he make it into the top 4 despite Bryce Salvador’s return? Can he deal with the eventual push of Adam Larsson and Alexander Urbom? Those are the questions he does have to face- however he should be fine going into training camp.

Role: First/Second/Third pairing defenseman- it’s not really a knock against Fayne- but really, I have no clue where DeBoer will use him.

Taormina only played in 17 games last season, however he managed to prove that he was good enough to stick with the big club. He was one of the best players on the John MacLean coached Devils before suffering a season ending ankle injury. From a lot of what I’ve heard about him at this year’s rookie camp, he’s been quite impressive. He provides the all important offensive defenseman- something the Devils lack. His size might be an issue to some however, he does lack the size many Devils defensemen have- namely the competitors for that 6/7 defenseman spot like Larsson, Corrente, Fraser and Urbom.

While many feel Corrente might be a bust, he has proven he can stick in an NHL role. His biggest concern would be injuries- he missed a lot of last season with a shoulder injury. Health will be a concern if he wants to make the team- an injury here or there could potentially mean that he could lose his spot to someone else. His physical game should be something that the Devils can use. He should be one of the guys who makes the team.

Like Corrente, Fraser did miss some of the season with a hand injury. He didn’t see a lot of action in the second half of the season, as Jacques Lemaire felt Anssi Salmela was better. Fraser should have a chip on his shoulder- and with a lot more competition around, he knows this camp is make or break.

Leach’s role won’t be on the big squad, but rather on the Albany Devils. He’ll pretty much spend all his time there, and won’t be part of the big club unless they’re down a defenseman and in dire need of one, like last year when White and Volchenkov were injured at the end of the season.

Harrold was an odd signing- he hasn’t accomplished a lot over the last few seasons as an LA King. In fact, here’s what Kings blogger The Royal Half had to say about Harrold signing with the Devils. 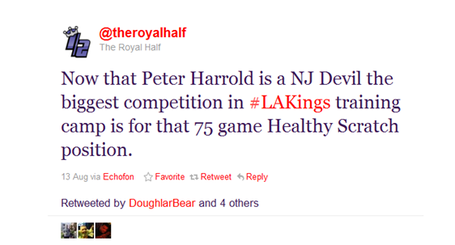 Yep, he’s not really going to do much if he makes the team.

Stralman was one of the camp invites- he’s wildly inconsistent, however he does have NHL experience- which might work in his favour. However, I do feel he will be cut from the Devils- there’s too much competition, and most of the competition could feature defensemen who should be part of the Devils down the road.

Urbom did not play in that many NHL games last season, however he spent most of the year in the AHL- which was good seeing as he still had one more slide year left on his entry level contract. Urbom will burn a year on his contract regardless of whether or not he plays with the big team. He is highly regarded by the organization, so he should get a fair amount of chances. He does have some pretty stiff competition- he should make the team if he impresses. If not, he should see some more time in the AHL.

Rather than looking at each of these three defenders individually, I've grouped the three together just because they're all quite similar in the sense that 2011-2012 will be their first pro season. Sova was signed as an undrafted free agent from college, while Burlon decided to go pro and Gelinas finished off his junior career with a memorial cup win with the Saint John Sea Dogs. While they are making their debut as pro hockey players with the Albany Devils, there is a chance that one of them can become part of the team, just like Mark Fayne did last season.

The Swedish wunderchild drafted 4th overall in the 2011 NHL entry draft should have a chance to stake his claim on a roster spot on the 2011-12 New Jersey Devils. Larsson is one of the most highly rated prospects in the league- and is considered by some as the best defensive prospect in the league, like Corey Pronman did on Hockey prospectus. Larsson has the skill, the question is can he prove that he belongs in the NHL. He has played with grown men in the SEL, but the NHL is a different beast. Larsson's role will likely be different than his role in Skelleftea AIK, where he was often used in a more defensive role. Due to the offensively challenged Devils defensemen, he will see more time in offensive situations and on the power play.

Role: Unknown- too many possibilities.

Overall Strengths: The Devils defensive group features a lot of defenders who are good in their own end. Volchenkov and Salvador are effective shutdown defensemen, while Tallinder’s biggest strength is usually his reliable play in his own end. The Devils defensive group also features a lot of big minute players- Tallinder and Greene both averaged around 22 minutes a game last season, while if Volchenkov is healthy he too can average over 20 minutes a game as well. Adam Larsson has the potential to be a big minute guy as well assuming he is part of the big club this season. Depth, which was sort of an issue last year, will not be nearly as big an issue this year thanks to the emergence of several young defensemen, as well as some AHL depth with the Peter Harrold signing and Larsson, Urbom, Gelinas, Burlon and Sova in the system as well.

Overall Weaknesses: Puck moving defensemen. Outside of Greene, they don’t have anyone who’s a proven puck mover. Fayne did prove that he has some offensive skill, but he’s probably not going to be leaned on as much this season with a healthier D corps. Matt Taormina is known for his offensive skill- however, he’s more likely going to be a bigger factor on the power play rather than at even strength unless he impresses enough to crack the top 4. Anton Stralman does have puck moving abilities, but he’s far too inconsistent to be relied on. Adam Larsson is a capable puck mover, but he’s not guaranteed to make the team. Additionally, while they do have good, reliable defensemen, they don't have an exceptional defenseman. They do have high end talent in Larsson and Jon Merrill, however as of now both are prospects and Merrill is ineligible to play due to his lack of a contract. However, the team's depth does effectively neutralize the team's lack of high end talent at the top of the team.

Five [Bold] Predicitions about the Defense for the upcoming season

1) Adam Larsson becomes a full time member of the Devils. He has the talent and the organization is highly impressed with him so far.

2) Anton Volchenkov will score his first goal as a member of the New Jersey Devils.

3) Bryce Salvador will be a difference maker this season for the Devils on the blue line- especially for one Andy Greene.

4) A Defenseman will be traded during the regular season.

5) The Devils will have two defensemen who will record over 30 points this season.

The Devils defense wasn't great last season largely because of injuries, however this year won't be the same. They have capable veterans as well as excellent youngsters. While it will be a while before Larsson, Merrill and Urbom are regulars in the NHL, the group that Lou Lamoriello has put together is good enough. On paper it might not be as good as say, Nashville or Boston's defense, but they should be able to prevent shots from getting through and help the Devils with maintaining a positive goal differential this season.