Before the lockout, the New Jersey Devils were known for their defensive style of play, or the neutral zone trap. They focused more on preventing goals than producing goals.  Then there was an entire season lost to harsh labor negotiations. Along with a very different collective bargaining agreement came rule changes that were intended to please the fans (or bring in more fans).  The two line pass rule was abolished, the neutral zone was cut down by four feet, and goalie pads were shrunk.  You don't need to have a degree in history to know this information, but the lockout made hockey a faster, more offensively centered game; much like the NFL and NBA.

The Devils were having success with their neutral zone trap and defense first mindset before the lockout.  We had a blue line with the presence of Scott Stevens, Brian Rafalski, and Scott Niedermayer. We won two cups in the five years leading up to the lockout; the Devils were finally becoming the dynasty we all know it as today.

Then the lockout came, and the Devils haven't been back to the Stanley Cup Finals, yet.

The lockout particularly hurt the Devils because they had to change their philosophy from the extinct neutral zone trap, to a philosophy that scored more goals and could handle the faster flow of the game. Fact: The only way to win a hockey game, is to score more goals than the opposing team.  Therefore, I take a look at whether or not the Devils have succeeded in increasing their goals for while hopefully maintaining or decreasing their goals against since the lockout changed the game.

One thing that cannot be debated in hockey, is the fact that having more goals than the opposing team will get you two points and a "W" on your schedule. But we can look at what may be worth more to a team in the post-lockout NHL, goals for or goals against?

I gathered the data from the 2005 season through the 2010 season (on Hockey-Reference) and found that the Devils have been decreasing in Goals For (GF) and Goals Against (GA) since the 05-06 season. We can see that the Devils have been consistent in regular season wins, except for last season. GF seem to have a higher correlation with the number of wins than goals against does. The GF seem to somewhat mirror the winning trend when you graph them.

We do see that the higher the goal differential, the higher the wins. This just correlation, not causation.  One would think that the larger the goal differential, the more wins. That's not necessarily true for two reasons. One reason is that you can win and lose games by different margins, leaving a skewed goal differential. The other reason is very tender for hockey fans...lucky bounces. You may be the better team, but sometimes, a goal is just random. That's why having players like Zach Parise who can make sure the Devils have possession of the puck for a larger period of time than the other team, may lead to...lucky bounces. (I'm not saying Parise isn't a great player, I'm just saying there's more to it than his stats.) 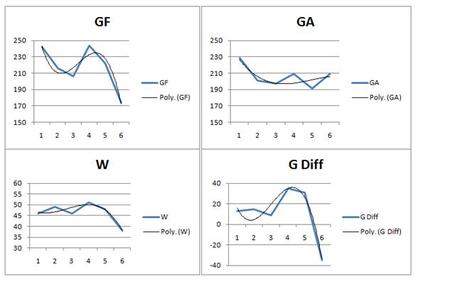 (The black line is a polynomial to the 3rd power, if you're into math) it basically helps to smooth out the season to season differences.

As you can see in the graphs, GF and goal differential look remarkably similar, while GA stays close to the same.  The answer to steady goals against is as simple as typing Martin Brodeur's name. In my opinion, the best goaltender to ever play the game, also the most consistent. You could say the backups make a difference in the GA category, but he still played a large majority of all the games. You can also say that the Devil's are defensively responsible. In the past Devil's systems, players were expected to be in a defense first mindset.

The conclusion I draw from this data is that goals against have been more important to the Devils than goals for. Clearly this has not been a bad path for the Devils considering that, barring last season, they haven't had a losing season since the lockout.  Even last season the Devils only missed .500 by three games! With Marty signed for one more year, they may want to focus on offense this season. Who knows what kind of system Peter DeBoer may implement, but it may be in his favor to transform the Devils.  Exactly how to transform them is up to him (and of course our rampant speculation). But we can see that goals for and goal differential tend to predict the number of wins better than goals against.