The Lokomotiv Yaroslavl Memorial at Championship Plaza in Newark

Share All sharing options for: The Lokomotiv Yaroslavl Memorial at Championship Plaza in Newark

Earlier on Friday, hockey fans gathered at Championship Plaza by the hockey player statue in Newark, New Jersey in memorium of the members of Lokomotiv Yaroslavl who perished in the recent plane crash. Two of those players had ties to the Devils: defenseman Karel Rachunek who played for the team in 2007-08, and forward Alexander Vasyunov, who performed in the NHL for the first time last season. While it was organized by Devils fans, it wasn't necessarily a Devils-specific event. Anyone who wanted to leave a sign, flowers, candles, or something else entirely at the statue were welcomed.

I couldn't make it to the memorial, but from what I've read, it was a success. Per Carlos' post about his time at the memorial over at Speaking of the Devils, the memorial did attract a small crowd over two hours or so, and all paid their respects. From Carlos' pictures in that post, which you really should see, people left what they wanted at the blade of the stick. I'm not sure how long it will all remain out there, though. That's not to say someone will mess with it. the Devils are planning to bring the items inside the Rock so they can be viewed by fans and not have it out in the open; along with planning a digital memorial. Both are certainly laudable and supportive actions by the team.

I'm rather impressed at how this all came together. It was a simple act by fans who wanted to show their appreciation and express their feelings for Lokomotiv Yaroslavl. That was accomplished by those who came up with the idea, those who went and left something, and those who couldn't go for one reason or another but were more than happy to spread the word or asked if someone who was going to bring something to the memorial. I learned about it through Twitter, message boards were active and may have drove this effort for starters, and even those who aren't Devils fans (e.g. reporters, other fans, other blogs, Alexander Ovechkin, etc.) were more than happy to spread this around. What was done on Friday afternoon was certainly appropriate, earnest, and important in remembering Vasyunov, Rachunek, and the others on Lokomotiv Yaroslavl who died in the plane crash. Among other possibilities, that there was a memorial at all speaks to how the tragic event in Yaroslavl really did affect people around the world; and how a player can make an impact on fans even if their time on the team was limited.

Thank you to those who came up with the idea of a memorial, those who spread the news of the memorial, and those who went to the memorial either just to have a moment of silence or to leave something in memory. Most of all: rest in peace, members of the flight crew and Lokomotiv Yaroslavl who perished in the crash. 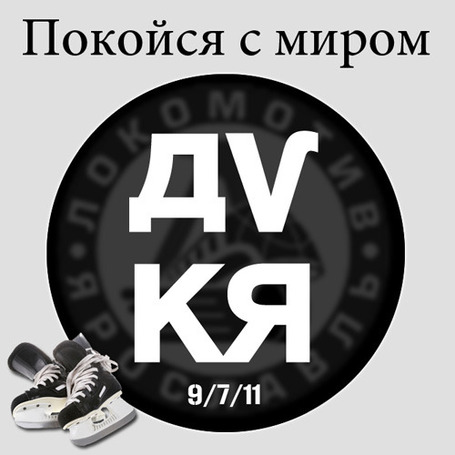 Picture by Richer's Ghost from Hockey's Future, with poster's permission.