Over the last few days, John has been reviewing video highlights of goals scored by New Jersey Devils. Today I'm changing it up a bit- instead of doing a goal breakdown of a current New Jersey Devil, today's review will be on a future New Jersey Devil, top prospect Adam Larsson and his goal against Russia at the world juniors. In this tournament, there is a mixed bag of competitors. Most of the competitors at the world juniors play in different leagues- some might be playing in the OHL, like Gabriel Landeskog (who was unable to compete at the juniors), some might be playing at the collegiate level like Jon Merrill, while others might be playing with grown men like Larsson. While Larsson isn't doing anything spectacular against grown men, he is one of the team's top prospects and is currently signed to a contract- so he deserves some analysis for a notable event involving him- even if he's playing against players who have yet to turn pro. [Edit: Added players names in- H/t to C.J. Richey for getting their names]

First off, here's video of the goal courtesy of Youtube user whateveryou8

While I can't identify all of the players on the ice, there is one player who I can identify- Anton Lander, #16 for Sweden and a prospect in the Edmonton Oilers system. He's important to the play- so there will be some focus on him as well. 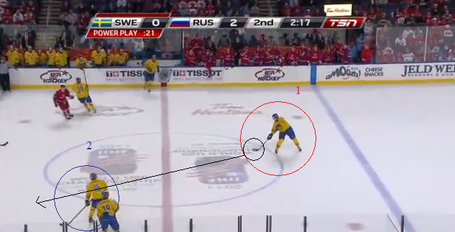 The play starts with Adam Larsson (1) moving the puck near his own zone. He's not under pressure, and he has all the time to make a play- which is passing the puck to Anton Lander (2). If you didn't notice from the scoreboard, it's a power play for Sweden. 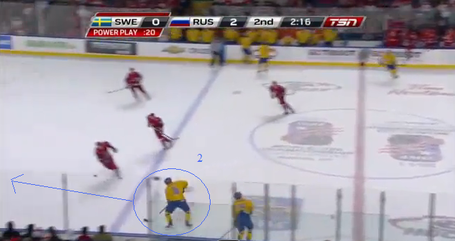 Lander has recieved the pass from Larsson. He will now enter the offensive zone- with the two nearest russians coming after him to try and stop him from getting the puck on net. The closest one (wearing #8) will take on Lander. The Russians have good positioning here- it doesn't seem like there will be a goal developing from this picture. 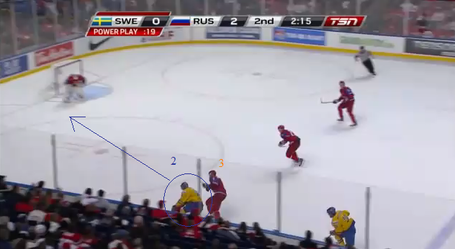 As expected Anton Lander heads to the net. The Russian defender (Georgi Bedyukov, 3) has to stop Lander from getting to the net, and does so by knocking him off the puck. Again, the Russians are doing a good job defending here. 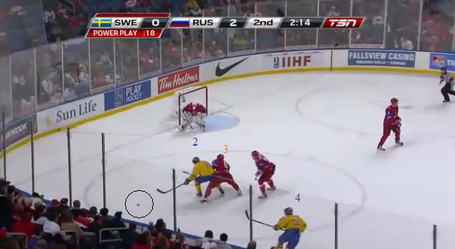 Lander got knocked off the puck by the Russian defender. Now the puck's loose- however, Lander can get to the puck. He will be dogged by the two russians closest to him- although he does have support here with a nearby teammate- Jesper Thornberg (4). 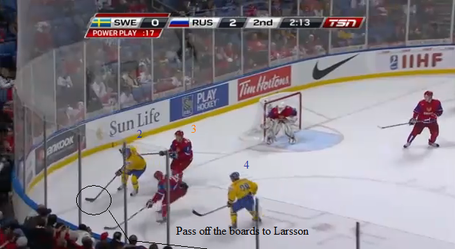 Lander was able to recover the puck- the problem is now he's boxed in by the two russians covering him. He can't pass to his nearby teammate (4), but he does have another option, seeing as Larsson is at the blue line right now. So instead he passes the puck off the boards to Larsson, who's at point right now. 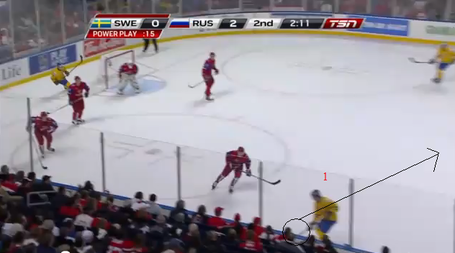 As expected, Larsson gets the puck. However, he's under immediate pressure from a russian forward (Evgeny Kuznetzov). So he makes a nice backhand cross ice pass to the other point (Klas Dahlbeck) on the power play. He makes a good calm play too- if he hesitated the russian forward might have picked off the pass and kill time on the almost finished Swedish powerplay. 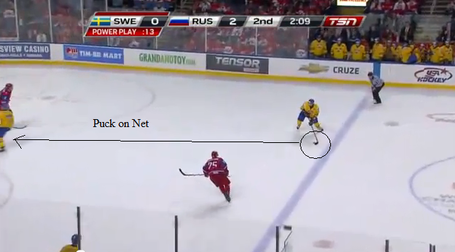 As expected, Dahlbeck is now able to get a clean shot on net as he's wide open. However, there's quite a bit of traffic in front, so there's a chance he doesn't get his shot on net. 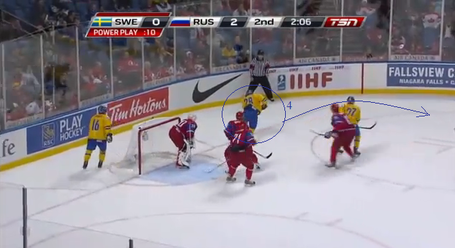 Unfortunately for Sweden, the shot misses- however, Thornberg is able to get the rebound, but isn't able to shoot so he goes back towards center ice and looks for an open man on the left side, seeing as he's got 3 Russians on him. 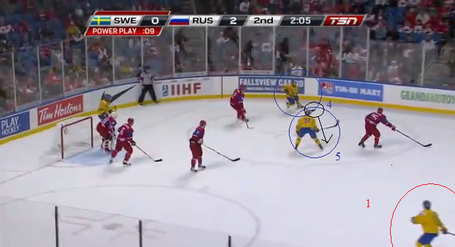 After getting the puck back, Thornberg has his options- He's got the man on the right point, and his nearby teammate Rickard Rakell (5). The pass will go to his nearest Rakell, as he has a bit of space to shoot the puck. Larsson is on the blueline as well- but he won't be staying there for long, as there's a slight problem with the play... 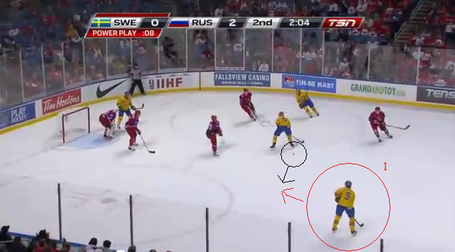 Rakell wasn't able to handle the pass from Thornberg- which is a bad thing because he could've had a good shot from near the slot- plus with Anton Lander near the net any rebounds can easily be scooped up. However, the puck will slowly drift towards the wide open Adam Larsson, who notices the play and steps up to take a shot on net. 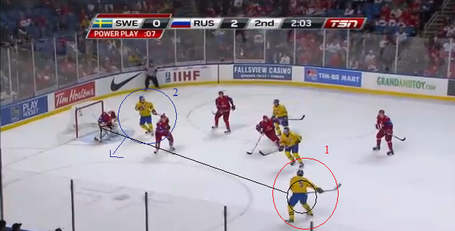 As you can see here, Larsson has a wide open shot. The Russian Goalie has a good view of the shot- as there's no traffic. That is, until Anton Lander (2) moves in front of him to screen him, making him lose track of the puck. The Defenseman in front of the goalie doesn't have as much of an impact as Lander does. The result? 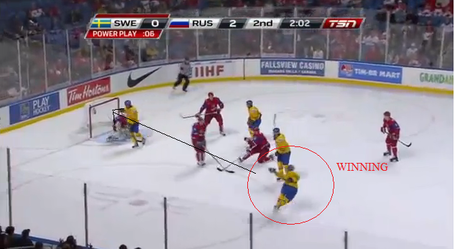 A perfectly placed shot which cleanly beats the Russian goalie.

You really can't blame the goals on the Russians- they did their best to defend- just a bad bounce for the Swedes turned into a bad bounce for them. The focal point of this analysis was Adam Larsson- and while he was the one who scored the goal, you can witness his solid puck moving ability. His pass to Lander in the first frame shows his solid vision of the ice, while his pass to the open point man under pressure showed his composure and finally the goal showed his excellent shot. Anton Lander deserves some credit here too- he made the right decisions when he had the puck- and his last second screen on the Russian goalie affected how well he saw Larsson's shot.

While there aren't many videos of Larsson scoring goals in the SEL- this video highlights some of Larsson's strengths. With that being said- what do you think of Larsson's goal? Do you also think that this variation of the NJ Devils Goal Breakdown feature should be done again, except with different prospects? Leave your thoughts in the comments. Thanks for reading.