Share All sharing options for: Video Review: Patrik Elias' Goal Vs Carolina on 2/16/2011

First off, video of the goal.

First off, I'll start at around 2 or 3 seconds 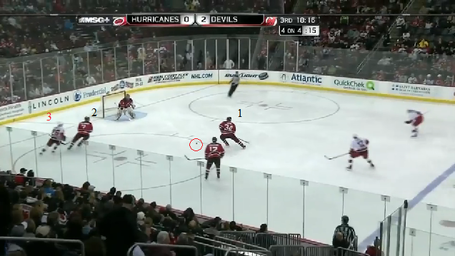 The small red circle is the puck. The player numbered "1" is Mark Fayne. The Player Numbered "2" is Henrik Tallinder. The Player numbered "3" is Erik Cole, the forechecking hurricane. The other three players are not really relevant to this play, so they are not numbered. In this play Mark Fayne plans on going after the puck, after Erik Cole dumped the puck in from inside the Devils zone. The Hurricane closest to Fayne, Eric Staal will be coming after him. This is a 4 on 4 situation right now. 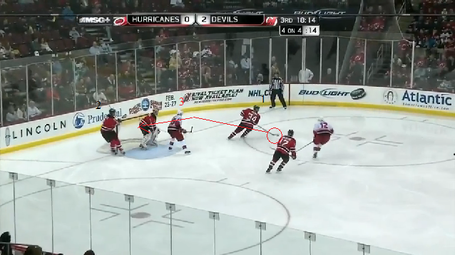 As you can see, Fayne is getting dogged by Eric Staal. He's holding the puck, and will pass the puck to Tallinder after he goes behind the net.. Cole is ready to go behind the net as well. 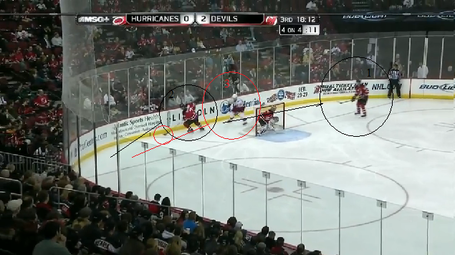 So Fayne makes the pass to Tallinder. Both Tallinder and Cole are going after the puck. Fayne will go behind the net to collect the puck, as Cole is committed to delivering a check on Tallinder. 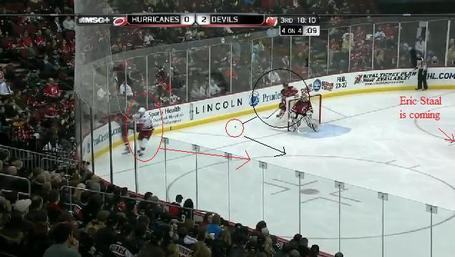 In the far right of the screen, you will notice the arrow to "Eric Staal is coming"- which is very important because of what happens next. Mark Fayne gets the puck, which Tallinder passed to as Cole went to check him. Cole is done with his check, and will skate towards Fayne to try and cause a turnover and feed Staal for a scoring chance in the slot. 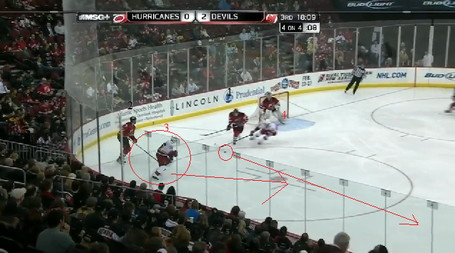 Now Eric Staal (4) has come in for the puck. However, Fayne's ready to make the pass, and while he doesn't have anyone who's in the frame of the shot, he's got someone he plans on passing to... 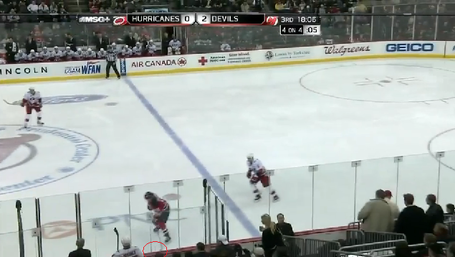 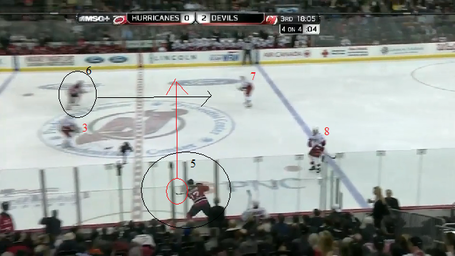 After getting the puck, Rolston (5) isurvey's the scene and gets ready to make a nice cross ice pass parallel to the center ice line. Patrik Elias (6) is skating towards the net, and will get the puck. Jamie McBain (7) and Tim Gleason (8) are the defenders, as well as Erik Cole (3), who will be backchecking. 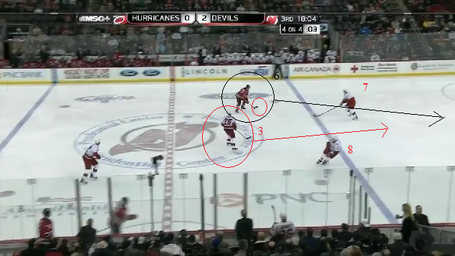 It's now basically a 1 on 3 with Elias going up against Cole, Gleason and McBain. Rainer Wolfcastle McBain is defending Elias. With the nearest Devil being at the blueline, all Cole has to do is try and stop his numerical counterpart Elias from getting past McBain by skating towards his net. He does, but there's a slight problem in the way he skates towards there... 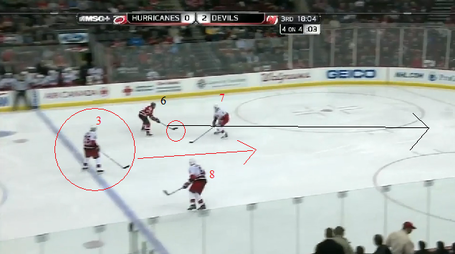 Cole looks like he's given up trying to catch Elias, instead letting McBain try and stop him- which is a terrible plan of action. There's nothing worse than getting scored on in a 1 on 3, and Cole's laziness is the reason why. Tim Gleason on the other hand, tries to help his defensive partner, he's just too far away. 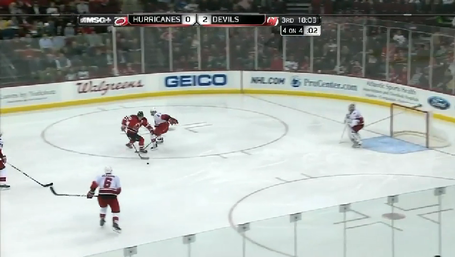 Sadly for Cole, his faith in McBain was not enough to prevent Elias from getting past him, as he does right here with the nifty move. Cam Ward, the Hurricanes goalie gets ready to face Elias, who will likely be going in for a shot with McBain out of the picture. 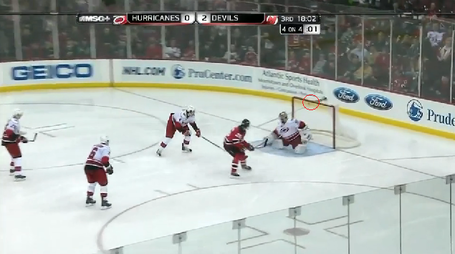 Elias goes in and throws it backhand and top shelf behind Ward, who looks like he was expecting Elias to try and deke him.

Patrik Elias makes a great move on McBain and scores on Cam Ward. If it was a 1 on 1 play, it wouldn't be nearly as bad- a rookie defenseman got beaten by a forward who's recorded over 700 points in the NHL. However, it was a 1 on 3- Gleason was too far away to do anything, while Cole just didn't care.

The three people who need to be credited with making this goal are Fayne, Tallinder and Cole. Fayne and Tallinder had a great sequence behind the net, and Fayne's pass to Rolston was great.Tallinder kept his poise and was completely calm under pressure, and did his job of getting the puck to Fayne and preventing a good scoring chance.

Erik Cole on the other hand did a good job on the forecheck, but he didn't backcheck very well. He might not be as good as skater as Elias, but he has to take some responsibility for lazily backchecking and expecting a rookie defenseman and his all-star goalie to stop Elias. Unlike the Flyers goal where Andrej Meszaros couldn't keep up with Elias because of a long shift, Cole was only on the ice for about 22 seconds between the start of the shift and the goal- if I was Paul Maurice i'd be screaming explitives at Cole for his laziness on that play, as fatigue could not be an excuse there.

If anything, the Devils did a good job on offense while the Canes were a bit lazy in their end.