A Closer Look at Martin Brodeur's Save Percentages by Season

Share All sharing options for: A Closer Look at Martin Brodeur's Save Percentages by Season

I've thought a lot of Martin Brodeur, legendary goaltender for the New Jersey Devils, over the past two weeks.  Mostly that was due to reviewing the goals he allowed in this past season.  While I'll summarize those results tomorrow, I wanted point out something I found interesting at NHL.com in the meantime.  The players' stats page has a section for splits where goaltending data is divided up among even strength, power play, and shorthanded situations.  I believe this is a sensible way of breaking down save percentage as the non-even strength situations are likely going to be more difficult for a goaltender.   From my viewpoint, the goalie is facing one (or two) more attacking players than his defense can account for in a power play situation; and shorthanded shots are usually the result of a breakdown by his own team - meaning that while uncommon, they can be commonly dangerous.

These splits go as far back as the 1997-1998 season; back when Brodeur was 25 and the Devils had only one Stanley Cup.   I decided to take the data listed from each season from NHL.com and put it into a chart.  I found that Brodeur's even strength save percentage was less variable than the special teams situations, among some other interesting findings. Check it out after the jump. 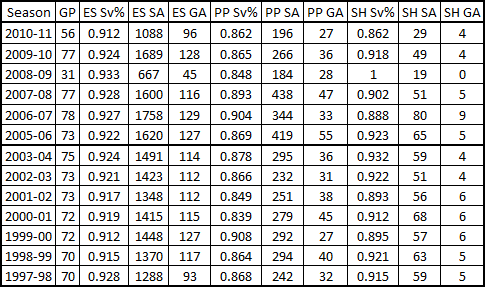 Since 1997-98, Martin Brodeur has played 13 seasons; staying mostly healthy for all but two of them.  You'll notice the even strength save percentage took a dive in this most recent season, ending a seven-season run of 92% or better.  That's pretty impressive as Brodeur kept that up while entering the later stages of his career and missing a season due to the labor disputes of 2004.  If Brodeur wasn't 39, then I would suspect some people would expect a rebound in performance in 2011-12 based on this past history.  After all, the last time he hit 91.2% was over a decade ago.  Alas, that will not be said.  What will be is that Brodeur is near the end of his career and it's showing in his stats (despite what a review of the goals he allowed show, of course; but that's for tomorrow).

What sticks out on this chart are the special teams percentages.  They're all over the place.  Brodeur's had 3 seasons where he did well in power play situations, surpassing the 89% mark.  But they're really the exception as the rest is mired in between 83.9% and 87.8%.  It suggests that goaltenders suffer when their team is down a man or two; which I don't think should surprise anyone.  Shorthanded percentages look a little better in comparison.  However, the small population of shorthanded shots against makes it easier for percentages to shift even with the shorthanded goals staying around 4-6 goals (2006-07 excepted).

By calculating the mean and standard deviation of each situation, you'll see further evidence of the variability of save percentage in special team situations as opposed to even strength play.   I also divided up pre-2004 and post-2004 lockout situations just for curiosity's sake.

Huh.  Brodeur has better save percentages after the 2004 lockout as opposed to when he was in his prime earlier. Granted, I'd love to have seen the splits for his amazing 1996-97 season (92.7% total save percentage - yeah, total) included; that may balance this out further.  Still, it seems that his relatively poor even strength save percentage from 2010-11 is somewhat balanced out by the amazing 93.3% he posted in his injury-shortened 2008-09 season; and the other four seasons aren't dragged down too much.

Here's a question: what happened prior to the lockout that caused Brodeur to not put up similar numbers?  I suspect it may be a function of the awesome defense in front of him (and potentially scorer bias) reducing the number of shots, thereby driving percentages down.  Since Stevens, Niedermayer, et. al. were gone in 2005-06 along with some changes in the game that led to more attacking play, shots against at evens went up by about 200, Brodeur just made more saves, and the percentages improved even with allowing a few more goals.

Jumping back to the special teams, check out the standard deviations (S.D.) for power play and shorthanded situations and compare them to the even strength standard deviations.  The difference is quite stark.  A higher standard deviation means there's more variability.  I didn't think that bearing out in the results is too surprising. With power plays and shorthanded situations, there's more variation because those situations aren't always guaranteed.  The Devils don't draw a lot of penalties, they don't take a lot of them, and it varies from game to game whether the ref even calls them.  That's just for the situations themselves, whether the other team does anything on them is another factor.  While the population size isn't large, it (further) justifies looking at even strength percentages for evidence of Brodeur's performance.

So if you're thinking about what Brodeur really needs to do for 2011-12 to have a better season, then I suggest looking at even strength play.   It doesn't vary much from season to season; and the fact it went down by .012 last season could be a reason to be a little concerned.   As for special team situations, count on a few shorthanded goals that will surely be enraging and count on a sub-90% percentage on the power play. It may more constructive to hope the Devils remain near the bottom in the league in taking calls; and hope the power play units don't make too many heinous errors.

However, as I'll show tomorrow in the summary of the goals allowed review, I don't think Brodeur needs to do too much different in 2011-12.  Until then, what do you think of these percentages?  What do you make of the notion that the even strength percentage is less variable and higher than save percentages for either special team situations?  Are you more convinced of using even strength save percentages instead of total save percentage?  Don't you wish the league would have these numbers going further back than 1997-98?  Please leave your answers and other thoughts about Brodeur after the jump.