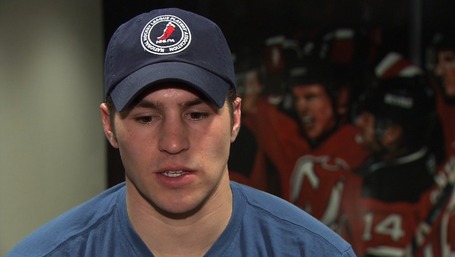 I often wish Tom Gulitti would write his articles with the sort of candor he uses to respond to his commenters over at Fire and Ice. Today he was in rare form going into the prolonged negotiations (or lack there of) in getting a contract with Parise done. Here are some choice remarks. You can sift through all of the comments and his replies over here.

Regarding the long delay in getting a contract worked out with Parise.

They had two and half open months after the season to get ready for the draft and they picked the player fans here were talking about since December.

Most of the draft preparation, which began well before the Devils even won the lottery, was done by people other than Lamoriello anyway.

They didn’t even start preliminary talks until the week leading up to the deadline for the team to file for arbitration.

But, to go back even farther, as I’ve said many times, they should have been negotating a long-term deal with Parise after last season when Kovalchuk wouldn’t talk deal with them before July 1. Parise was willing to do it. They could have locked him up and announced the deal at noon on July 1, 2010.

It was nearly a year later before they did anything.

So, yes, they easily could have gotten done months ago without Lamoriello haven’t to strain himself too much.

But, he chose to do it this way and, yes, Parise fell into later in the order behind players less important than him.

Then some more on the topic. My own emphasis in bold

I think it was the plan from last year to put the screws a player who they should not be putting the screws to.

If they had started talks last spring, Parise would have been so impressed by the idea that Lamoriello actually went out of his way to do something like that (he’s never done it), he would have been quite agreeable. It was something that should have done and something plenty of other teams have done with similar players. (I know at the time he was even considering doing the contract without an agent—before the complications with long-term contracts that came from the Kovalchuk mess made that impossible)

Then, Parise hired these current agents, who probably would prefer he sign a one year deal right now and go for the jackpot next summer as a UFA.

Since showing last summer that Kovalchuk was their priority, the Devils have given Parise every reason to wonder if they really want him here long term and plenty of time to think of reasons why he might be better off playing somewhere else.

On not opening negotiations with Parise last summer. My own emphasis in bold

Kovalchuk was a UFA with a small window to get him signed by his own choice—and right.

The Devils could have had a much bigger window to re-sign him if he gave it to them by agreeing to negotiate with them before July 1.

When Kovalchuk told the Devils he wanted to see what he could get on the market and the Devils not only waited for him to do that, but gave him $20 million more than any other team offered (and also waited 17 days for him to accept)—while making no attempt to try to start negotiatuons with Parise from the end of the season on—they clearly showed who was more important to them.

On the Devils acting fully within their rights Vs. handling things the right way.

It seems to me the difference in what some of you are talking about and what I am talking is what the Devils have the right to do under the CBA and what they should do/should have done to lock up a player who is very important to them and has been nothing but a good soldier for the organization.

You might want to look at it another way, but if Zach Parise does end up becoming a UFA next summer and leaves, I’ll see it as the result of the Devils not handling this the right way and nudging him slowly toward the door.

You guys like to complain about players leaving, but you never look at the steps that led to them getting to the point where they could leave and the factors that would even make them even consider leaving.

Scott Niedermayer wanted to play with his brother, sure, but there were other things that led him down that road to leave and put him in position where he wantned to be a UFA in the first place.

One of them no doubt was the time the Devils played hardball with him in negotiations as an RFA and he held out until he finally gave in and took what they offered because he had no choice.

The Devils had every right to do what they did, but you could definitely argue that they picked the wrong player to do that with. Niedermayer was that important that he deserved the kind of treatment Brodeur and Stevens received.

I think Parise falls into that category as well.

I still think Zach Parise will get re-signed long-term mostly because that’s what he wants. The Devils are playing with fire here, though, by leveraging the guy with an arbitration hearing and dragging this out to try to squeeze a few dollars out of him.

Again, that’s their right. They’re doing nothing that’s not in the CBA. But that doesn’t mean it’s the right way to handle things with a player of this importance.

In Lou we trust right? Right? I sure hope so.