2011 Offseason: Will There Actually Be a Arbitration Hearing Between Zach Parise and the New Jersey Devils?

Share All sharing options for: 2011 Offseason: Will There Actually Be a Arbitration Hearing Between Zach Parise and the New Jersey Devils?

Arbitration is an ugly word to New Jersey Devils fans. The history of Devils players who stick around long-term after having an arbitration case isn't great. When arbitration and Zach Parise are brought up, people get nervous.  Currently, Parise is one of the twenty-three players who have salary arbitration hearings scheduled in late July and early August.  While he is one of only two players going to arbitration based upon the club deciding to initiate their arbitration rights, the fact that Parise has an arbitration case is not the end of the world....yet.  As has been discussed at length on In Lou We Trust the club filing for arbitration was a tactical move in order to defend against offer sheets from other clubs and ensure Parise will be a Devil in 2011-2012.

Despite the chorus of people concerned that the Devils aren't acting as fast as they can to sign Parise this is typical in contract negotiations with two parties that have a 'deadline'.  The current deadline to re-sign Parise is August 2nd/August 3rd.  Neither party wants this to go to arbitration, I can assure you of that.  In fact, to help show why I think arbitration is highly unlikely I looked at last year's arbitration hearing/schedule and subsequent deals from 2010.  After the jump you will see some information that makes me believe that it is unlikely that Parise and the Devils go before an arbitrator. 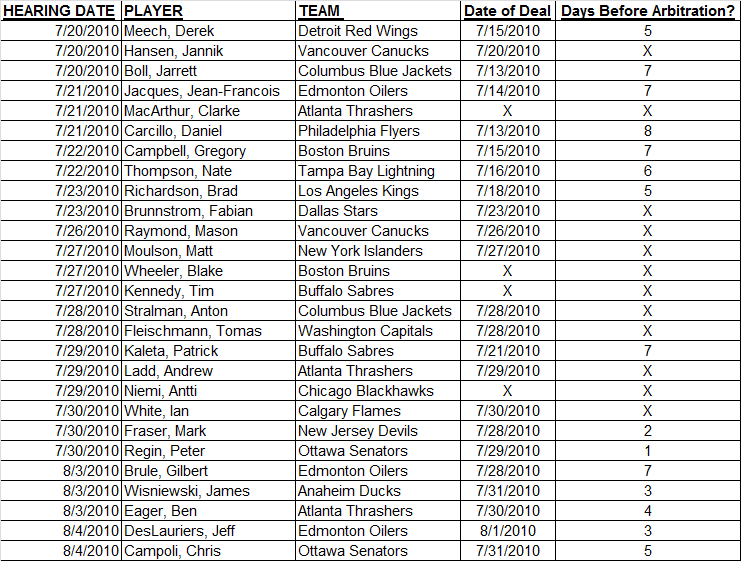 Day of Hearing Signings:  9 of the 27 cases (33%) were settled right before their arbitration case was ready to be held.

Arbitration Cases:   4 of the 27 scheduled cases (15%) went to arbitration.  This is the last thing we want to see for a variety of reasons.   Out of the 4 cases that went to the arbitrator last year, in each case you could make the assumption that the player 'won'.  Their 'win' did not help them create any long lasting relationship with their team.   Two of the players (MacArthur, Niemi) had their teams walk away from the arbitrator awards, one was bought out four days later (Kennedy) and one was traded during the following season (Wheeler).

Based solely on last year's total 85% of the scheduled cases never made it to the arbitrator. (Yes, I know it’s a small sample. Although 2009 had similar results with 17 total cases, 4 going to arbitration and 13 settled early. TSN had a summary here.)    The trend is continuing so far this year as 9 of the 23 players scheduled for arbitration (39%) have already been settled with five days still remaining from the first scheduled hearing.  This doesn't include Andrew Cogliano who was dealt from the Oilers to the Ducks last week and Chris Campoli who is rumored to be traded before his artbitration case.

All that data aside and with many teams seemingly looking to avoid arbitration can we still expect Parise's deal to go down to the last day or the day of his scheduled hearing?

I think we can, but I believe there is another factor in play here:  Shea Weber.  The Nashville defenseman's hearing is scheduled for August 2nd, one day before Parise's.  I would think that his deal will have some influence on the Parise deal in both structure and cap hit.  If the Predators give Weber a $7MM AAV long-term deal, Parise's camp is going to push for a similar deal plus more as Parise is clearly the better commodity.  If Weber takes a hometown discount and receives a $5.5MM AAV long-term deal then the Devils can point to that deal as the market value for a star player.

Of course if Weber's case actually goes to arbitration then that deal won't have any affect on the Parise talks with New Jersey.

As we just saw with the Devils signing of Adam Larsson, deadlines spur activity and compromise.  The Devils have made it clear that they want to sign Parise long-term. Parise has said that he wants to sign long-term.  If both parties have the same end goal, it will happen.  Neither party wants to go through an arbitration hearing and even if the financial terms of a long-term deal can't be reached, then a one-year deal will be the fallback.  Despite the near weekly reports we hear that there 'is nothing new' regarding negotiations that isn't concerning.  For the most part, the standard player contract is pretty straightforward.  It comes down to money, term, and movement/trade clauses.  In other words a standard player contract can be hammered out pretty quickly.

The only concern I have about signing Parise long-term is if he wants a front-loaded deal like the ones that have been prevalent during the offseason.  With Ilya Kovalchuk scheduled to begin making $11MM per year in real money in 2012-2013, front-loading a Parise deal could be problematic.  Considering the new CBA I am sure the Parise camp doesn't want a back-loaded deal with the fear that there might be salary rollbacks.

But rest assured Devils fans, Parise will be a Devil in 2011-12 and likely beyond.  I can't predict the exact cap hit or length of the contract but I think we have seen that both parties want to work something out.  As fans, it is frustrating as we don't know the exact tone/conversations that the two parties have had.  We might think that because it has taken a long time to negotiate the Parise contract that it is a bad signal.  Don't worry. Even when it's August 1st and he hasn't signed yet, don't worry.  The negotiation will go down to the last minute but Parise will be wearing the #9 sweater on opening night.