Did Fighting Really Benefit the New Jersey Devils in 2010-11?

Share All sharing options for: Did Fighting Really Benefit the New Jersey Devils in 2010-11?

Upon my last two posts wherein I shared my thoughts and feelings about the recent signings of Eric Boulton and Cam Janssen, I made it clear that I didn't like either signing and later showed that neither can be considered improvements over Adam Mair - a player I don't think any fan will miss in 2011-12 - based on what they did last season.  To put it simply, both players are enforcers and to play them in actual NHL games will deny a player with more talent  or usefulness in the lineup.

I will admit that I do not like enforcers in general in hockey. They don't play a significant amount of minutes because they often do not make a significant contribution to their team.  I don't think they actually "enforce" anything, as players willing to do something cheap or malicious are going to do so regardless of whether they get punched in the face afterward.  As nice people as they may be, I'm not convinced they help teams win games - and at the end of the day, that's what I want to see with my time and money.  Wins. Results. Not two dudes who stop the game so they can go through their pre-arranged tussle.

However, perhaps I am mistaken.  Maybe fighting does have a positive effect for a hockey team.  Let's see whether it's true or not by looking at last season.  Should fighting have a positive effect, then we should see whether or not the team scored and/or conceded any goals in the period of that fight. I'm focusing only on the period as intermission allows for teams to rest, reset, and re-focused.   Should fighting give a team a momentum boost, then they should be scoring goals after some fisticuffs en route to wins, right?

I'll be the first to admit that this is a quick and dirty method, and something I did while specifically looking at Andrew Peters' fights.  Only this time, I'm looking at all 37 fighting majors and ignoring whether or not the player won the fight.  After all, after nearly every fight, both benches are banging their sticks and hollering their support regardless of result. Plus,

Clarkson led the Devils by a mile with 14 major penalties last season. 13 of these were for fighting.  Therefore, he's considered to be the team's "enforcer" even though he has demonstrated that he's got actual hockey skill.   What happened in the game after he dropped the gloves? 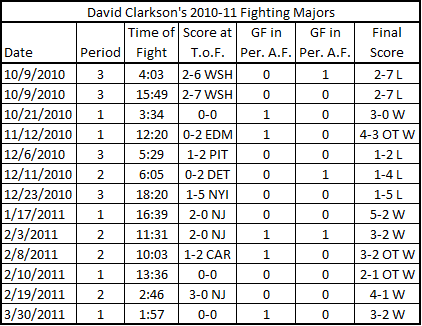 At first you may see this and think, hey, the Devils went 8-5 when Clarkson fought. That's not bad!  True.  However:

Therefore, we have a few  examples of a Clarkson fight led to a goal scored for New Jersey.   Four, to be exact.  Yet, this could be just coincidence.  Clarkson fighting someone may have inspired the Devils to do more and therefore broke through.  Or it didn't do much as the Devils preyed on a mistake by the opposition, or just broke through based on their hardwork regardless of whether Clarkson or anyone else fought.  Most importantly, the majority of Clarkson's fist-on-face battles did not change the outcome of the game - coincidental or otherwise.

That takes care of Clarkson, what about the rest of the team, who combined for 24?  Adam Mair led the rest of the field with 5, which I do not think is enough to warrant a separate table. Therefore, I grouped them all here: 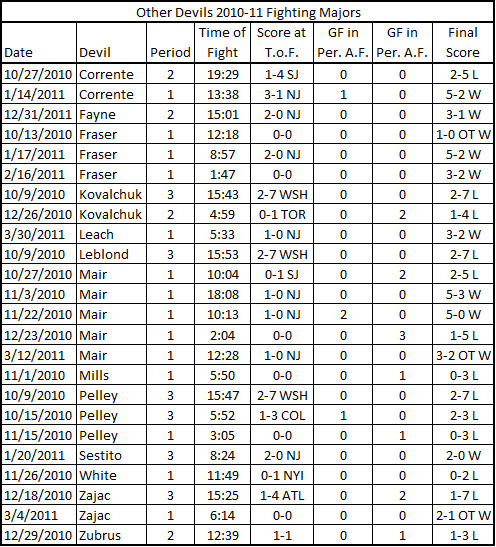 In many ways, the "field" is a bigger indictment of the notion that fighting had a positive effect for the Devils.  Here are the biggest points I found when putting this together:

Considering the rest of the Devils fighting, this seems to suggest that fighting really didn't have that much of a benefit for the Devils last season - even if it was only coincidence.

Again, I will say that the above may not be the best way to evaluate the effect of fights.  Shots after the fight may be more instructive.  I will admit this is a quick and dirty method and assumes that a change of momentum is meaningful when a goal is scored (or allowed) within the same period after the fight.

However, that assumption on momentum is predicated on something like a fight changing it.  Who's to say that's the only thing that can affect it?  Certainly many things in a hockey game can cause a change.  A big hit could swing momentum. The goaltender making a few crucial and impressive saves could improve momentum.  A few good, positive shifts in a row could change it too.  A penalty leading to a power play could change the course of the game. Of course, so could a goal.  All of these things can happen after a fight and could have just as much of an impact on the flow of the game as would a fight.  By singling out fights, we are forced to make a big assumption. Were we not to single them out, then we may find the fight could be overshadowed by other events.

Lastly, having momentum is not a prerequisite for success.  It certainly helps, but a team can certainly catch a break after being pinned back or get real lucky in scoring a goal.  Goals can come against the run of play, for lack of a better term.

Considering all of this, I'm even more skeptical of the effects - positive or negative - of fighting in general with respect to the game it takes place in.  On top of

What do you think? Did you find these findings surrounding the Devils' fighting majors to be of somewhat important? Do you think less of their impact given momentum in general along with the results surrounding them anyway?   Please leave your thoughts and answers in the comments. Thanks for reading.