Share All sharing options for: Taking a Look at The Albany Devils Depth Chart for 2011-12

After making the AHL playoffs for the first time in almost a decade in 2009-2010 under coach John MacLean, the Albany Devils took a big step back and were the worst team in the AHL last season. Beset by injuries at the NHL-level, the parent club was shuffling bodies back and forth from to . Talented players like Vladimir Zharkov and Mattias Tedenby that were rushed to the NHL hurt ’s depth at the onset of the season. This resulted in making their own calls up from and giving a lot of ice-time to young players, especially on defense.  also had their own roster issues as they were missing goalie Jeff Frazee, forward Nathan Perkovitch, defenseman Tyler Eckford, and others for extended periods of time.

Rookie coach Rich Kowalsky did a good job with what he had. It's encouraging that many of the opponents’ radio announcers commented that always played hard and would battle to the end of games. It's often hard to find a silver lining in a bad season, but Kowalsky didn't have the tools to win.  After a mid-season trade which sent forwards Patrick Davis and Mike Swift to the Worcester Sharks for Steve Zalewski, the Albany club surged a bit, but couldn't keep the momentum and faded badly down the stretch finishing with a league low 70 points.

Despite last season’s disappointing finish,   should have playoff aspirations this year. (It would certainly help the poor attendance. averaged a league worst 3,014 people a game last year and all Albany AHL franchises have been in the bottom 25% of attendance for the past decade.) This year should be different though. With the trade for AHL all-star Maxim Noreau, additions of talented rookies Mike Hoeffel, Brandon Burlon, Mike Sislo, Keith Kinkaid, and Eric Gelinas, will look to have a bouceback year.

Who else is still on the team and what will the roster look like?  After the jump I will look at the depth chart for and try to project their lineup.   I will also talk briefly about the AHL Development rule which impacts the configuration of each team's roster.

First let's go over the AHL development rule.  The AHL (in their FAQ section) defines the rule as:

Essentially this means you can dress a core of 4/5 what I will call 'veterans' per game (goalies don't count). 'Veterans' are determined by the number of games played at the AHL-level or above. Below I have listed all the players who i think might be affected by this rule. Note that this rule is based upon games played at the beginning of the year so players won't cross into veteran territory during the season. After the official signing of Tim Sestito on Sunday, will seemingly have Sestito, Stephen Gionta, Noreau, and Leach as their veteran players. Luckily AHL all-star Matt Anderson only has 219 games of experience meaning that he is still considered a development player. 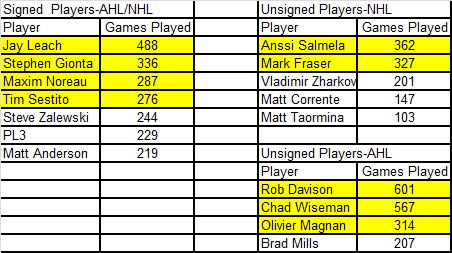 From the chart you can also see why having Mark Fraser or Anssi Salmela with the AHL club wouldn't make much sense. It also shows why players like Vladimir Zharkov and Matt Corrente who might be on two-way deals next year would need to fight for their NHL spots or risk being sent back to the AHL for development.

With the ability to dress only so many veterans you can also see this influencing AHL trades and re-signings. Players like Davison, Wiseman, and Magnan may be valuable to the organization but teams have to weigh who they want as their core veterans.  Perhaps one of the three mentioned get re-signed, but certainly not all three of them will be in next year.  Magnan was a steady defenseman at Albany last year, didn't play too badly during his NHL stint but it's likely that his veteran status plays a role in him not returning to the team. 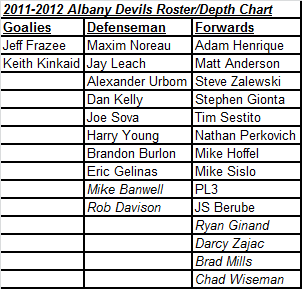 Goalies:  With the re-signing of Johan Hedberg, Jeff Frazee will once again be the starter in goal for . Keith Kinkaid, an undrafted free agent from , will be slated as the backup but will likely see plenty of time considering Frazee's injury history and the AHL schedule.  For those of you who don't follow the AHL, many times teams play three games in three nights on the weekends.  This helps create more opportunities for younger players to step into the lineup on a more frequent basis and will help ease Kinkaid into the AHL.  Having only playedabout 40 games a year in college, it would be hard to expect him to shoulder the goaltending load for the majority of the season.

Defense:  (Note I am not including Adam Larsson in this discussion.  I think if he does not make the NHL roster he will go back to the SEL.)

It's been a quiet offseason for the New Jersey Devils, but at the AHL-level the team made a trade that should help them immensely.  Acquiring AHL all-star Maxim Noreau gives the team an even-strength puck mover that they didn't have last season, a power play quarterback so desperately needed, and another experienced defenseman.  Noreau and Jay Leach will be the anchors to the defensive unit, likely on separate pairings.  Based upon the end of last season, I would expect Alexander Urbom to play with Noreau and Dan Kelly to be paired with Leach.  Now, we get to a problem area:  Who gets the playing time as the third pairing defenders?

Burlon leaving college early must have took the Devils by surprise, andhelped create the extra defensive bodies now at .   Managing a rotation of Gelinas, Sova, Young, and possibly free agent Mike Banwell ( a from signed by last year), the Devils had a nice mix of players to rotate into the lineup.  I could easily see the stay-at-home Young being matched up with the more offensively talented Gelinas or Sova.  Now I am not sure how Kowalsky will allocate the playing time to his young defensemen with Burlon now in the mix.

Burlon's addition means that it's doubtful that Banwell is brought back.  It's also unlikely that Davison and Magnan are brought back because of the limits on veteran players that they can dress per game.

Will one of the defensemen get traded?  If I had to speculate, I think Gelinas would be the most likely prospect to move, but that's a guess.  Should the team's defensive unit stay status quo with the eight defensemen listed above?  As we saw last season injuries can hit a team fast and furious during the AHL/ NHL season. I would expect that even if no trades occur that all of the defenders at will get playing time.  But will it be enough?

My expectation is that Burlon and Young will initially start out together on a third pairing with game-by-game changes inserting Gelinas and Sova into the lineup.

Once the inevitable injuries at the NHL-level occur, I would expect Noreau and Urbom to get first crack at going to New Jersey.

Forwards:  With the departure of Alexander Vasyunuv and the trade of David McIntyre, the Devils opened up some opportunities for players like Mike Hoeffel and Mike Sislo.  With the return of AHL all-star Matt Anderson I would expect the Devils top six forwards to consist of Henrique, Gionta, Zalewski, Anderson, Sestito and Hoeffel.  Of course as NHL need arises this configuration will likely change quite a few times during the year.  Also important is the position plans the Devils have for Henrique.  Does he begin the year at center?  If so, you might see Sestito centering a third line with Perkovitch or Sislo moved up to be part of the top six.  If re-signed UFA Brad Mills will probably factor into the top two lines.

Rounding out at least five of the bottom six forward spots will be our old pugilist friend from Newark PL3, JS Berube, Sislo, and Perkovitch.  I would expect Darcy Zajac to be re-signed to an AHL deal (if not a NHL two-way contract )and for him to play a good chunk of minutes for .  Extra forwards wil likely consist of It's likely that center Kory Nagy and former ECHL Trenton Devil players such as Ryan Ginand, Ryan Hayes and Matt Lombardi.

It's not the most offensively dynamic team assembled, however, the forwards Albany has are great grinders and with an improved power play and defensive unit should find the back of the net more often in 2011-2012.

I might be placing too much focus on the addition of Maxim Noreau, but his addition will help the power play improve upon its 13.6% conversion rate last year to keep the Devils in more games this season. The maturing of players like Alex Urbom and Dan Kelly will help a league worst penalty killing unit (although taking less penalties better be emphasized this year) and raise its league low 77.1% kill rate. The Devils had a -46 goal differential on special teams last season. If they can improve upon that and at least break even they should be a very competitive team this year.