How Should the 2011-12 New Jersey Devils Match Against Tough Competition at Forward?

Share All sharing options for: How Should the 2011-12 New Jersey Devils Match Against Tough Competition at Forward?

Matching lines is an old of a coaching tactic as you'll find, and it's usually a good practice to have.  You wouldn't want to see, say, Anssi Salmela out there for a shift against the other team's top line most of the time.  You would hope to see New Jersey try to get their top forward line out there after a tired opposition ices the puck or when the opposing coach sends out their third pairing first.   Match ups are important.

One of the trends that I've noticed in the post-lockout NHL has been the concept of matching "power for power."  The idea is that your top forward line is not only for offense but is skilled enough defensively to stop an opposing team's top line or at least offensive skilled enough to damage them more than they can hurt you.  There's only one puck, after all; and whoever controls it has the edge.   It's why forwards like Pavel Datsyuk, Patrick Marleau, and Henrik Zetterberg are so highly regarded; they don't just score points, but they do it often against the best the opposing team has to offer.

I'm sure this mindset has been around the game much more often, but it seems recent to me in that the Devils have used a checking line for most of the time I can recall watching them play.  For those unfamiliar with the term, a checking line is  three forwards whose main role is to stop the other team's best players.   Fans from the mid-90s will fondly recall the Crash Line and later whatever line Bobby Holik was centering as an example of a checking line.  Fans from last decade will point to John Madden, Jay Pandolfo, and whoever their right winger was at the time as another example.

However, the Devils have strayed from the checking line concept in recent seasons.  Through the quality of competition stats at Behind the Net, I'd like to show how the top six forwards in even strength quality of competition have varied over the last four seasons.   It also leads me to ask this question: Should the 2011-12 team continue this trend, or should they employ a checking line unit to take on the other team's best players?  By finding out who has been taking on the toughest competition, we may be led to a more informed opinion on this matter.

As usual for advanced stats, I'm using Behind the Net.  My metric is a minimum of 10 games played for the Devils, with one exception in 2009-10 (Ilya Kovalchuk, who played most of his season with Atlanta), and looking at the top 6 forwards in quality of competition for 5-on-5 situations.  I chose six to account for variations in lines throughout the season.   For reference, here are the links for each season.

For convenience, the forwards are in the following chart. 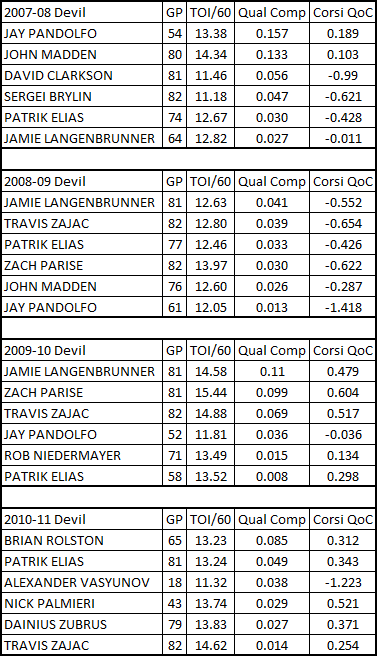 Let's start with the 2007-08 season. This appears to be the last season where the Devils relied on a specific checking line.  John Madden and Jay Pandolfo not only took on the toughest competition, but they were the only forwards on the team to earn a positive Corsi with respect to their respective values.  You'll also notice David Clarkson and Sergei Brylin amid the top six.  This will be the last season they saw that tough of competition, incidentally.

In 2008-09, Madden and Pandolfo weren't used prominently as a checking line. They were kept together, they got a good amount of minutes at evens, and they still made the top six.  However, the "ZZ Pops" line really came into form and so head coach Brent Sutter went to them a little bit more on offense.  You'll notice that all six forwards have a negative Corsi QoC here.  The entire team was below zero in this category; I wish I could explain why when some of these players had fantastic on-ice Corsi rates (namely Parise).

As Jacques Lemaire stepped behind the bench in 2009-10, the "power for power" approach really stepped in as the line of Parise, Travis Zajac, and Jamie Langenbrunner regularly ran against the opposition forwards.  I'm not completely sure why Zajac's so far behind Parise and Langenbrunner in terms of quality of competition; but all three stand out from the rest of the forwards. Each of them were the team leaders in scoring, so it certainly didn't cramp their production.  Jay Pandolfo and Rob Niedermayer were both defensive forwards, but they weren't used nearly as much as they have been in the past.  Lastly, note the Corsi QoC - much better than 2008-09 save for Pandolfo, which could be construed as evidence of his decline.

Finally, there's 2010-11, which featured two coaches in John MacLean and Lemaire replacing him.  Throw in several injuries at the beginning of the season, there was plenty of flux in this season compared to prior ones from this standpoint.  For example, Alexander Vasyunov played 17 of his 18 games under MacLean and due to injury and MacLean's special style of coaching, he saw tough competition for the most part.  Normally, a rookie/call-up wouldn't and should not be thrown into the fire like that.  Needless to say, it didn't work well.

What became apparent as the season went on, particularly under Lemaire, was the usage of Brian Rolston, Patrik Elias, and Dainius Zubrus as a line. Not only did it work well enough to keep together throughout the second half of the season, but they were used against tough competition and came out ahead in Corsi QoC. It's indicative that it was an effective unit.  I was especially surprised at Rolston's quality of competition being as high as it is - the eighth highest among forwards in the NHL last season.     Behind them were Nick Palmieri and Travis Zajac, who made up two-thirds of the team's other scoring line last season - continuing the suggestion of Lemaire returning to "power for power" match-ups.  (Ilya Kovalchuk's quality of competition was held to 0.006 as he was shifted all over the place under MacLean.)

One last note: One player was consistently among the top six Devils forwards in quality of competition: Patrik Elias.  It varied from season to season, as his role did. But like Brian Rolston surviving a qualcomp of 0.085 at evens, Elias being utilized more against tougher competition and succeeding was a welcome surprise.  It speaks to the quality he still brings to the lineup as well as what he can contribute to the team.  Like ZZ Pops in 2009-10, I don't think this utilization didn't hinder his production. Other factors certainly did, but Elias still managed to lead the team in scoring last season.

As such, we have to ask the question: what should the Devils do with their forwards against tough competition for 2010-11 from this standpoint?  The Devils could try to repeat what happened in 2009-10.  Zach Parise will be healthy and we have evidence that he can go up against the other team's best players, out-do them in terms of possession, and quite possibly outscore them.  He can be reunited with Travis Zajac and once the matter of identifying a qualified right winger is solved, the Head Coach To Be Determined can go "power for power" and reasonably expect to succeed.  OK, the matter of the right winger isn't a small one, since Langenbrunner's two-way skillset could be a reason why the unit worked so well against opposing team's top lines.  Then again, maybe the Devils don't need to find the next Langenbrunner; just someone who isn't a defensive black hole and can keep up with Parise and Zajac may suffice.  Should it be solved, "power for power" would be a defensible approach.

Alternatively, Mr. TBD may look to last season.  I don't think it's a stretch to assume that Brian Rolston isn't going to hit the rejuvenation machine.  As much as I like the little things he does, Dainius Zubrus doesn't put a lot on the boxscore.   Yet, paired with (carried by?) by Elias, the threesome did quite well.   Enough such that Rolston provided some use, Zubrus wasn't relied on to finish plays, and Elias was free to attack as he needed.  All three have the experience and knowledge to defend, and I don't anticipate that going away.   The head coach could put these three together again more in a checking line role, though.  This would allow Parise's and Kovalchuk's units to go up against weaker competition, while this unit certainly has more of an offensive threat than the old days of Madden & Pandolfo.

Were I to choose, I would go with the checking line option if only because it may be the only viable way to get some use out of Brian Rolston without hindering other forwards in 2010-11.  As much as I'd like to see a team take the last year of his albatross-like contract, I'm not holding my breath that it'll happen.  Plus, I don't think that whoever the opposite winger for Parise and Zajac would be - assuming they're kept together - will be as good as Langenbrunner was then.  I hope I'm wrong, but it's a tall order to fill if the idea is to use a "power for power" approach. While he's certainly earned the fan's contempt, Langenbrunner was a very effective two-way winger through the 2009-10 season.  It all just fell apart in the 2010 playoffs.  Anyway, that's how I see the Devils answering this question regardless of who coaches the team.  It's my answer; and I do recognize that  whoever it is will provide their own answer.

What would be your decision? Do you see it as binary as I do, or do you think there is a third way?  Either way, what do you make of how prior Devils teams utilized their forwards against tough competition?  Do you want to see them go "power for power" in the future, or go back to something like a checking line as they did in the past? Please leave your answers and other relevant thoughts in the comments. Thanks for reading.