Well it wasn't a move that New Jersey Devils fans were expecting (or hoping for) but the team made a trade with the Minnesota Wild today.  First reported by Mike Russo, the Minnesota Wild beat reporter, and later confirmed by the Devils twitter feed, the Devils moved center David McIntyre to Minnesota for defenseman Maxim Noreau in an exchange of minor league prospects. (Thanks to CJRichey121 for posting up a fanshot about it.)  The move was unexpected but not that surprising.  The Devils will have a surplus of young forwards at the AHL level next year and were lacking in seasoned defensemen at Albany.  After the jump I have some thoughts about the deal, where Noreau might fit next year and who might have seen their last days in a Devils jersey.

First, let me talk about David McIntyre.  (Full disclosure....I was a McIntyre fan.)  He was a hard working, durable, defensively responsible player who I thought might excel as a bottom six forward in the NHL.  In his first full season at Albany he didn't have the type of offensive production that had made him a Hobey Baker Award candidate at Colgate, but still was a steady contributer.  I was a little disappointed that he never got a shot with the NHL club last season (especially with all of the injuries) and hoped he would get a legitimate shot at a fourth line role in training camp this year.

Considering some of the forward depth at the NHL level and with the AHL team adding Mike Hoeffel, Mike Sislo, and probably Darcy Zajac and JS Berube to full time roles, McIntyre became a victim of numbers and consequently expendable.  Now at 24 years old (and with his fourth organization), he might be seeing his last legitimate shot to break into the NHL with the Wild.  I hope he makes it, wish him well and thank him for his play at Albany.

Noreau was described by Mike Russo in today's Star Tribune as:

Noreau, 24, is a bona fide minor-league All-Star who is just itching for a chance to make it in the NHL. It's become clear that's not possible in Minnesota, not with the amount of defensemen on one-way contracts, plus two-way depth with Clayton Stoner, Marco Scandella, Justin Falk, Nate Prosser, Tyler Cuma, Chay Genoway, etc, etc.

Signed originally by the Minnesota Wild in 2008 to an entry level contract, Noreau played with Victoria of the QMJHL in the Canadian Junior Leagues.

A First Team AHL all star last season, Noreau was one of the top scoring defensemen in the AHL with 10 goals (6 on the power play), 54 points (33 on the power play), and 216 total shots in 2011-2012.  His 44 assists were tied for 2nd most by an AHL defenseman. He led the AHL in total shots by a defenseman, power play points (33), and power play assists (27).  His power play skills helped the AHL Champion Aeros to a 20.2% power play percentage last season.  The only statistical concern would be his plus/minus of -5.  That said, with the Aeros having an adjusted goal differential of 162 even strength goals for and 146 goals against (+16), it's not that concerning.

So why would the Wild trade him?  Let's check with the Hockey Wilderness Blog to see what they said about Noreau today:

Maxim Noreau is a popular defenseman in Houston. He has been a good soldier with the organization, making the AHL All-Star team on multiple occasions, and often times being the Aeros leading scorer. This move isn't about Noreau's ability at the AHL level. He has proven he is a solid, scoring d-man at that level. However, that success never translated to the NHL, and the Wild could use more help at forward than at D.

Many wondered why Max never got his chance with the Wild. Then he was given his chance, and it became rather clear why he wasn't going to be sticking around. His play just did not approach that of Jared Spurgeon, Marco Scandella, or Justin Falk. Max is buried behind a long line of d-men in a deep organization, and needed out.

So it would seem that Noreau never asserted himself at the NHL level and that his acquisition will likely be more for depth at the AHL level than anything else.

Lou Lamoriello confirms as much with Tom Gulitti on the Fire & Ice Blog, in a blog post that went up earlier:

"He’s an offensive defenseman and a right-hand shot and it’s what we needed quite frankly in Albany," Lamoriello said. "He’s had some experience. He had asked that if there was an opportunity to go somewhere else because it didn’t look like he was going to play at this point (in Minnesota). This is someone we’ve had eyes on before because of his upside. He’s been an all-star in the American Hockey League and that’s the reason for the trade – depth."

Lamoriello said it was “hard to say” if Noreau was someone who could end up making the NHL squad next season.

“We had (Mark) Fayne 11th on the depth chart this year and he played in the NHL,” Lamoriello said. “This is a minor league trade right now and we’ll see, but he has had experience as far as success. He’s been a quarterback of a power play, so we’ll see.”

Sure this is a depth acquisition, but I think this is a terrific deal for the New Jersey Devils for three reasons:

1. It Takes Pressure off of Young Defensemen:

The Albany defense was criminally young last year and needed to add a veteran that could be the #1 guy as the young defensemen continue on their development path. Instead of trying to utilize an AHL journeyman like Jay Leach, Cory Murphy, or Rob Davison the Devils went out and got one of the best defensemen in the AHL.

I have used this chart below but it's important to put into perspective the inexperienced defense that Albany put on the ice last year. While players like Alexander Urbom, Dan Kelly, and Harry Young are a year older, you are adding more rookies in Eric Gelinas and Brandon Burlon to the mix and you can't hope to have a successful team with all first and second year players. 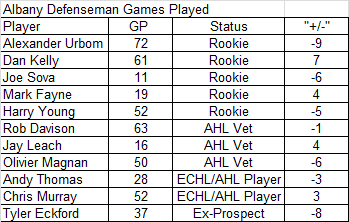 Noreau fills the role Tyler Eckford had for the past few years, possibly with better defensive upside. With Eckford seemingly not in the team's future, they have not only replaced his role and skill-set but upgraded the roster in the process.  Noreau's 54 points last year was more production than Albany got from their top two point scorers (Alexander Urbom/Rob Davison).  Noreau scored 10 goals last year.  The Albany defense-in total-scored 19.

Noreau will instantly help a power play that was 29th in the AHL (13.6%). Without a proper power play quarterback the Albany power play units typically utilized five forwards and would have been better suited using a player who could distribute the puck with more skill.  Noreau's 27 power play assists attest to his ability to generate offense on the power play.

Noreau's addition is also important since the Devils will likely have rookie Keith Kinkaid sharing time in goal next year. Surrounding him with quality players is important to his development.  The .891 team save percentage from last year could be partly attributed to the young defense in front of the goaltenders.

Noreau is currently a restricted free agent who Lou Lamoriello stated he plans to re-sign. While Lamoriello also stated that this trade would not have an impact on the status of any Devil free agent defenseman I would find it hard to believe that Anssi Salmela is re-signed after Noreau's addition.   While I don't think he is slated for an NHL role I believe Noreau will get a shot (likely due to injury) to play for the Devils this coming season, but highly doubt he will make the roster out of training camp.  As far as Albany is concerned I doubt that Jay Leach or Rob Davison is brought back with Noreau now on the team.