Share All sharing options for: The ILWT Readership Top 5 Prospects for the 2011 NHL Draft (For Now)

Last week, I asked you, the In Lou We Trust readership to give me your top 5 prospects for the 2011 NHL Draft. I wanted to see what your collective response would yield in terms of rankings regardless of the teams picking in the top five of the draft. Who would be at the top? Where would Sean Couturier be? Would it be radically different from what Copper & Blue readers collectively thought? Earlier today, I took everyone's comments where they listed five prospects in definitive order, weighted each place (first is 5, second is 4, third is 3, fourth is 2, fifth is 1) and summed up the weighted vote. The totals were as follows: 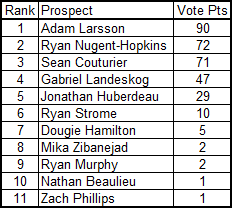 11 different prospects appeared across 22 different lists; but the total top 5 shouldn't be a surprise. The ILWT readers felt defensemen Adam Larsson is currently the top prospect, followed by four forwards: Ryan Nugent-Hopkins, Sean Couturier, Gabriel Landeskog, and Jonathan Huberdeau. The big shock to me was how close Couturier was to Nugent-Hopkins. C&B readers proclaimed RNH to be number 1 and he is projected to be the first overall pick by various experts, but you readers felt otherwise.

What was also surprise was how these different lists broke down. Please continue after the jump to check that out. 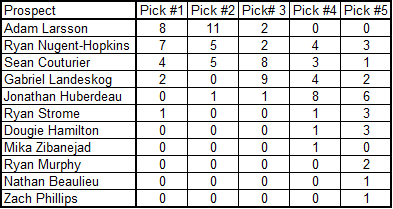 The first major point I want to make from the voting breakdown was how neatly it all stacked up. Larsson, who led the group, garnered the most first place selections just ahead of Nugent-Hopkins. Beyond Larsson, variation set in for Nugent-Hopkins and Couturier. Landeskog and Huberdeau were common names, but mostly in the 3-5 range.

Here are a few more findings of interest.

For the most part, ILWT readers have a set top 5. One defender in Larsson, and the four other forwards: Nugent-Hopkins, Couturier, Landeskog, and Huberdeau. The only real difference between this and the poll at the Copper & Blue was the positioning of Nugent-Hopkins. The positioning of Couturier, Landeskog, and Huberdeau were exact. The C&B readers felt Nugent-Hopkins was #1, ILWT readers not only thought otherwise - but he nearly fell behind Couturier. Perhaps the readers here value the defenseman that much more - either for New Jersey or just in general. Perhaps they aren't as impressed with RNH. Perhaps they just like what Couturier can do and hope New Jersey gets him at fourth overall. Perhaps.

Anyway: it's also clear that there may be more variation beyond the top 5. There may not be all that much interest since the Devils won't be drafting there, but maybe as the draft comes closer it may be interesting to see what a collective top 10 would look like. Would Ryan Strome really be the #6 guy or would Dougie Hamilton or Ryan Murphy make more of a case? Would Zach Phillips and Mike Zibanejad be more pronounced in a top 10? Who else would sneak in? Would there be more lists presented closer to the draft date? The questions abound.

In any case, thanks to everyone who provided their top five prospect list. Regardless of whether you provided one or not, what do you think of the results? Were you surprised at who was #1 or how close Couturier was to Nugent-Hopkins? Why do you think the results are what they are? Can anything change your mind in a month or so? Please leave your answers and other thoughts about prospects in the comments. Thanks for reading.