2011 NHL Draft: Comparing the Point Totals of Sean Couturier and Jonathan Huberdeau. How did they do versus similar competition?

Share All sharing options for: 2011 NHL Draft: Comparing the Point Totals of Sean Couturier and Jonathan Huberdeau. How did they do versus similar competition?

fter looking at Adam Larsson and his ice times, stats, and production from the Swedish Elite League, I thought it was time to take another a look at some North American prospects, specifically Sean Couturier and Jonathan Huberdeau.  Both Couturier and Huberdeau play in the QMJHL (the 'Q'), are coming off fantastic regular seasons (Huberdeau is still active in the 'Q's' playoffs), and have been ranked highly in the Central Scouting Services Final Rankings released on 04/11.  In that list Huberdeau hopped Couturier from the Rankings released in January.  I was a bit surprised to see JH hop SC considering that SC had not had a drop off in play.  Many thought SC should have shown 'more' at the World Junior Championships, but I am not sure what 'more' they were looking for.

My main purpose here is to see how Couturier and Huberdeau fared against the competition in the Q.  I am always concerned that players with gaudy junior point totals often beat up on the lower echelon teams in the league and struggle against the better teams.  I didn't find this to be the case here, but I think there are some important numbers of which to be aware.  After the jump I put each Q team into 'Tiers' and evaluate how Couturier and Huberdeau fared against each 'Tier' during the 2010-2011 regular season.

Before I go on, I want to point out some similarities and differences between the players.  Both Couturier and Hubdereau were prolific scorers in the Q this year.  They led their respective teams in points, averaged over 1.50 points per game and had over 60 assists on the season.  However, they do not play the same position.  While Huberdeau is listed as a center, he has played most of his time on the left side this season.  If you don't believe me then compare the following stats:  Couturier took 1430 faceoffs in 58 games last season.  (Note he was 5th in the Q in total faceoffs taken and would have likely been #1 had he not played in the WJC.)  Huberdeau?  He took 280, winning 114, which was good for 8th on the Sea Dogs.  Unless he has a continual problem with staying in the faceoff circle he is a LW as far as I am concerned.  There is nothing wrong with that, I just want to be sure we are all clear on what position he is actually playing.  The breakdown for the past two years for both players is below.

With Couturier and Huberdeau in the same Major Junior League we can see how they fared against similar competition.  Below you will see the final regular season standings in the QMJHL.  Based upon the teams’ percentage of acquired points, I ranked them into different 'tiers' of competition.  The table is pretty self explanatory but I just wanted to point out a couple of items:

1.  My tiering system might not be perfect and arguments could be made for only having three tiers, having in Tier 2 or having Tier 3 rolled into Tier 4, etc..  All are legitimate arguments, but since I go on to break down the point production of both Huberdeau and Couturier by opponent, you can make your own conclusions on how they fared against your perceived ‘top competitors’.

2. Despite being in the same league, the schedules that Couturier/Huberdeau played were a bit different and that influenced the number of games they played against teams in each Tier. 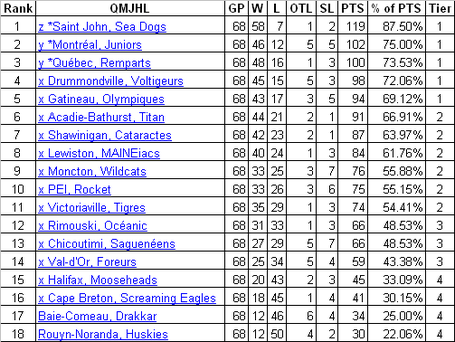 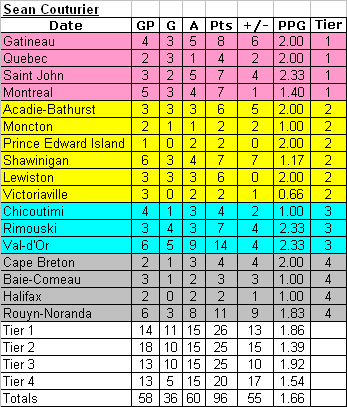 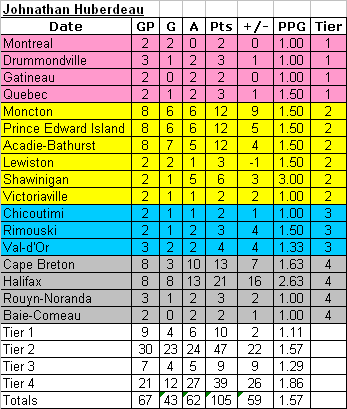 Don't punish Huberdeau for playing more games against the Tier 4 teams.  The schedule is the schedule (that's so very Mike Babcock of me) and the players don't choose their opponents. Plus, you can argue that the dominance of made these teams perform as poorly as they did.

That said, and while it was only 14 games vs. 9 games, Couturier played better against the top competition.  Averaging 1.86 points per game vs. 1.11 for Huberdeau, Couturier played better than his normal season point averages and against better teams.  The fact that Couturier was a +13 against top competition and Huberdeau was only +2 shows that Couturier was not only scoring himself but making sure the other team didn't score.

But what about the QMJHL Playoff Stats?

I prefer to stick with looking at the regular season but since I know the question will be asked, I also broke out the stats for both players in the QMJHL playoffs. 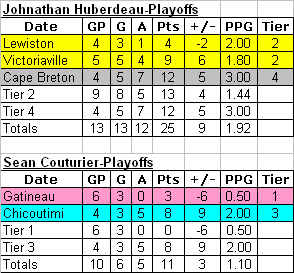 I think the regular season breakdown above and what I had looked at back in my mock draft underscores how good Couturier played this past season as opposed to any bad implications about the play of Huberdeau.  Huberdeau is a good player.  He might have the higher offensive potential, but again the complete package of Couturier is more of an appeal to me, and hopefully to the New Jersey Devils if both players are available with the 4th pick in the 2011 draft.