After the jump you will find statistical updates on Devils prospects from the Canadian Junior Leagues and stats for some of the top 2011 Draft Prospects.  I will also provide the updated listing of college free agents who have signed NHL contracts.

In the QMJHL Eric Gelinas and the Saint John Sea Dogs swept the Lewiston MAINEiacs and will now wait for the winner of game 7 of the Quebec/Gatineau series to be determined before beginning the final round 'The President's Cup' slated to begin on Thursday.

After having their backs against a wall (snicker) Maxime Clermont and Gatineau have climbed out of 3-1 hole and tied their series up at 3 games apiece.   Clermont pitched a shutout the other night, stopping 21 shots.  He is leading all QMJHL goalies in Goals Against Average and Save Percentage.

With momentum on their side I hope Gatineau can pull out the series as I would really like for Clermont to face the tough task of trying to steal a series away from the Sea Dogs.  First they need to get past the Remparts tonight! 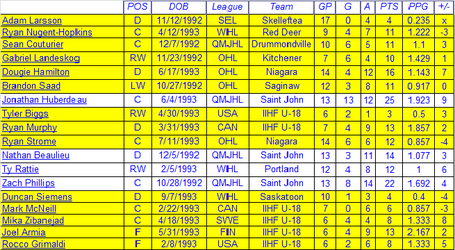 With the IIHF under 18 tournament concluded only of the few top prospects still remain active.  The big three from Saint John and Ty Rattie from Portland in the WHL.  As far as I am aware there are no prospects in the World Championships (although I thought I had read Zibanejad was going to play) that are playing.

At this time there have been no new college FA signees for any club.  Since I still do expect some other college players (Scotter Vaughan, Mike Montgomery, and Bryan Hogan) to sign elsewhere so I will update my FA list as signings still occur.

THanks for reading and sound off below!