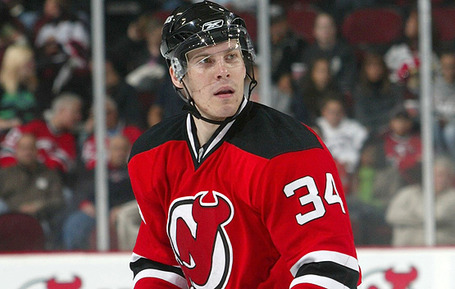 Anssi, poor Anssi. You have become synonymous 'round these parts for "bad defenseman." And while you've had your blatant lapses, I for one Anssi didn't think you were that horrible. I actually thought you really started getting things together in the second half of the season. Am I the only one?

Sure he's 26 (or is he 25?), but it also took Brian (edit: mental fart ) Andy Greene a lil while to have the fans stop screaming "You suck!" I'm not gonna do the advanced stats thing because that was already kind of done to death in John's 4-part post about replacing Greene from within. They weren't that pretty to look at anyway. Seriously though, was I the only one who saw him improve vastly in a short span of time at the end of the season? Which he then followed up with a gold medal at the World Championships (was anyone watching his play game to game or just reading the box-scores... I wasn't). His positioning was getting better, he started coming up more in the rush and I get the general sense from his comments he REALLY wants to be here and has something to prove. And I don't mean "here" in the NHL, but with the Devils specifically. I think a lot of his issues stemmed from a lack of confidence and not his ability and hockey sense.

I don't think he's going to develop into a puck-mover or a truly offensive defenseman, but if he continues on the foundation he started to lay at the end of 2011 he could turn into steady and reliable two-way D-guy as a #4 (high expectation) or bottom pairing at probably under 1 million a season. I'd much rather the team qualify him over Mark Fraser because he his skill set (please no jokes) and experience with the club is a much rarer commodity than what Fraser brings.