After the jump you will find statistical updates on Devils prospects from the Canadian Junior Leagues and stats for some of the top 2011 Draft Prospects.

After being down 3-1 Maxime Clermont and the Gatineau Olympiques completed a comeback against the Quebec Remparts last week, winning three straight to take the series and are now playing the Saint John Sea Dogs in the President's Cup for the right to be crowned the QMJHL champion. The QMJHL champion will move on to the Memorial Cup to play a round robin series against the other two Canadian Junior Leagues. For his efforts Clermont was named the Vaughn CHL Goalie of the Week. Going up against the Sea Dogs juggernaut has been no easy task and the Olympiques are currently down to the Sea Dogs two games to one in the best of seven series. Boxscores, via the QMJHL website, are available for Game 1, Game 2 and Game 3. Clermont has faced shot totals of 37, 40 and 35 in the three games so far.

Regardless of how the series plays out, Clermont has bounced back from his mid-season struggles and other adversity he faced during the year which will only help him in the future. It couldn't have been an easy year for Clermont considering he fell later than he probably expected at the 2010 NHL Draft and subsequently got benched for the end of the regular season and the start of the team's playoff run. Great job by Clermont to keep his composure to take back the goaltending job early in the playoffs. 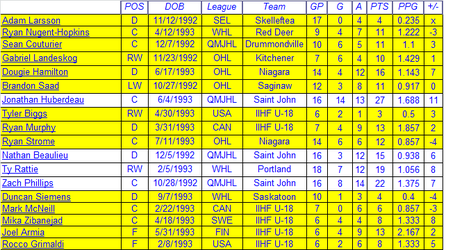 Only a few players remain active on the top prospects list with the three Sea Dogs and Ty Rattie still battling in their respective Junior League's Championship Series. Huberdeau is a plus two and has one goal and one assist, Beaulieu has an assist and is a plus three, and Zach Philips has not registered a point yet in the President's Cup. Ty Rattie has a goal and two assists two games into the WHL final.

With both Canadian Junior Leagues finishing their seasons soon, next weeks posting will likely be the last 'Stat Update' of the year. I will continue to update any activity from Devils who play in the Memorial Cup as needed.

Thanks for reading and sound off with any questions or comments below!