When I saw my twitter feed on Sunday that the Devils had signed University of New Hampshire Mike Sislo to an Entry Level Contract, I was excited.   While part of the excitement was for Sislo, a right winger who played on a line this past season with Paul Thompson and Phil DeSenatore, the other part was for the activity the Devils have shown thus far in attempting to sign collegiate free agents.  With Sislo and Joe Sova signed to entry level deals starting next season, the Devils have been one of the more active teams during this period. Only the Edmonton Oilers (Taylor Fedun, Tanner House, Mark Arcobello) have signed more NCAA Free Agents to ELC than the Devils.

As I write this there have been 12 college free agents signed to ELC deals over the past month.  Over 30 college free agents have been signed to Amateur Try Out contracts with AHL clubs during the past month.  Having a Try Out with an AHL club does not bind a player to that organization (as an example Matt Taormina signed his first ATO after college with Binghamton and Darcy Zajac signed his first with Adirondack), but it is a good indicator on where the player thinks he has the best chance to gain an ELC.

I am not sure if everyone else in the community is as fascinated by the NCAA unrestricted free agent market as I am.  If not, I at least hope I have piqued your interest with my past posts on the subject which you can find here and here.  But why does it fascinate me so much?   A few reasons:  first (and as I mentioned on the latest episode of Talking Red) I like free stuff.   To me, free agents available from the college ranks are the equivalent to getting ‘free stuff'.  Toronto GM Brian Burke has been said to describe finding a college free agent as similar to finding a wallet.  Maybe it's just me but if I find a wallet I return it.  If someone gives me free stuff, I take it.

Call it free stuff, finding a wallet, or hitting the lottery, in the current hockey landscape of Entry Level Contracts and salary caps, being able to acquire talent at a minimal investment can be a huge coup for an organization.

Second, because of the Collective Bargaining Agreement restraints on Entry Level Contracts and how much salary a player can make in a season ($900,000 base, 10% signing bonus and performance bonuses.  Section 9.3.d of the CBA talks about this), every team is on a relatively even playing field when it comes to financially courting a NCAA free agent.  The quality of the organization and most importantly the path to the NHL is what a player will focus on when choosing to which team he should take his talents.  Plus the fact that next year an additional constraint will be added in that salary caps of players will include performance bonuses further limiting the financial carrots teams can use to entice players to sign.  To me, the process is much more interesting than players flocking to the top dollar on 7/1. (Although the process is more interesting, the volume of activity on 7/1 is much more exciting.)

Finally, it's a second chance.  For teams like the Devils who drafted poorly from 2005-2007, signing NCAA free agents now helps to cushion the blow from 3 very weak Devils draft classes.

After the jump, I list out all of the Entry Level Contracts and Amateur Try Out contracts that have been inked by college free agents with a few thoughts about the overall market for NCAA FA players.

Let's start out with the ATO players.  Below are the 30+ players who have been signed by various AHL clubs to Try Out contracts.  I have listed the AHL team, the parent/NHL club and the school each player attended.   Note that some of the players below might actually be signing or have signed ELC deals.  I am leaning on www.capgeek.com for my ELC information so until they report it I am assuming that the players below only have signed an ATO.  Some, like Chase Polacek, have indicated in interviews that they will be with their AHL club next year so they may in fact have signed an ELC.   I would be rather surprised if Polacek didn't sign an ELC. 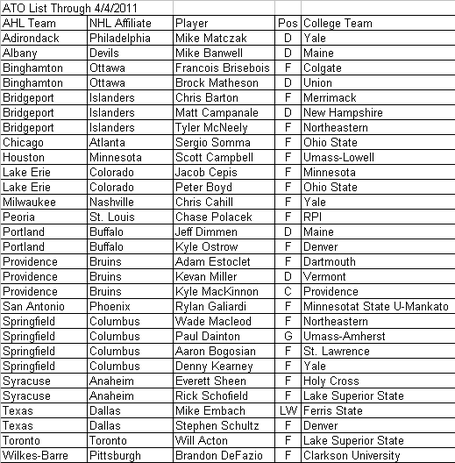 Besides Polacek, Sergio Somma, and Denny Kearney not too many names jump out at me from the list below.   What I think is important to take away from this list is the activity of certain teams.  Teams with limited payrolls like the Islanders, Blue Jackets and Avalanche are using the ATO as an opportunity to find real diamonds in the rough as opposed to taking a chance with the financial commitment a ELC entails.   This is a good approach and the Islanders are probably the most active team in signing not only NCAA free agents but Major Junior free agents.  I have to commend them for the approach they take in trying to create organizational depth by attempting to plug organizational holes with players who were overlooked by others and giving them a chance to show they belong at the professional level.  Without much capital to work with they do a good job in finding value in players.

The Devils have only signed one player to an ATO at this time.  Mike Banwell, a 25 year old stay-at-home defenseman from the University of Maine, is likely no more than depth for an Albany team that has a very young defensive unit.  At this time he has only dressed for one game with Albany.

(Note: I did not track any ATO signings by clubs in the ECHL.)

The table below shows the 15 NCAA free agents signed to a ELC by NHL teams.  Technically there have been 12 ELC since some of the contracts do not qualify.  Matt Read will turn 25 in the fall and by virtue of his birthday was able to sign a deal unrestricted by the constraints of a normal ELC contract. Where ELC are limited to two years for a player who is between the ages of 22-23, Read had no such constraints.  Many wondered why Read didn't leave school last year with some lucrative deals on the table, but this is why.  By waiting it out a year in college (a big risk with the possibility of injury), he was able to get a signing bonus $470,000 more than anything he could have gotten the year before.  Tommy Grant, signed by the New York Rangers and Tanner House signed by the Oilers also fall into the class of being too old for a ELC.

Note that the signing bonus column is the aggregate amount for the length of the contract while the AHL Salary/NHL Cap Hit columns are per each year of the contract.

Of the other 12 ELCs, the Stephane DaCosta and Andy Miele deals can be the most lucrative.  Their contracts technically begin this year and will expire after next year, giving them a jump start on a new restricted free agent contract.  Compared to every other player on the list who have contracts that start in the 2011-2012 season DaCosta/Miele get a full signing bonus for this year ($90,000) and become RFAs in 2012-2013.  They also have performance bonuses included in their contracts and since both of their clubs shouldn't have salary cap problems next year the lack of a bonus cushion next year is not an issue for their clubs.

The 10 remaining ELCs signed all have similarities in that they all begin next year and are two years in length, have no performance bonuses and are manageable cap hits for their respective clubs.   You can also see from the signing bonuses which players might have been in more demand than the others. The Devils' Joe Sova has a low aggregate signing bonus, but remember that he left school early without as much fanfare as a player like DaCosta did.  It's my opinion that if the Devils had waited until the end of next year for Sova to finish college they would probably have had to give him a top-of-the-line signing bonus and possibly more in order to sign him to a ELC.  6'3 defensemen who can move the puck and anchor a power play aren't easy to come by.

With all of those free agents signed are there any left?

There are a few. With four teams still active in the Frozen Four tournament there should be another barrage of signings early next week.

Scooter Vaughan of Michigan is an interesting player. Converted this past year from a defenseman to a forward he has adjusted to his new role well and I would expect him to sign on somewhere quickly. Mike Montgomery of Minnesota-Duluth actually made the switch from forward to defenseman two years ago and is captain of the Bulldogs. Brian Hogan of Michigan anand John Muse of Boston College are goaltenders that excelled in college that are still available.

Will the Devils be active in the pursuits of any of the remaining players?

I didn't think the Devils would be as active as they have been. Signing Sislo and Sova were surprises, being involved in the Miele talks were surprising (although it was a rumor started through a now deleted tweet by an ESPN writer) and hearing that Lou Lamoriello was on the phone talking to prospects last Sunday was surprising. I think Lou Lamoriello might have one more signing up his sleeve and surprise us again. Who will it be? If you have read any of my posts you know I want the Devils to sign Chay Genoway from North Dakota, however I think that they will be outbid for his services. Since he is 24 years old he might be a tough player to sign as he can only be signed to a one year.

If I had to bet on it, I would say Scooter Vaughan. The Devils have been active in scouting Michigan the past three years since they have had a few draft picks land there and have likely seen his progression from defenseman to forward and may like the flexibility he brings to the table. Second choice would be Montgomery. A guy with a good size, a big motor and a team captain is the type of player the Devils like to bring into the organization.

My Take on The Devils Activity:

I love that the Devils were active in signing players to add depth to the system. While they aren't the players I focused on in previous updates, I am not a scout and I will trust the decisions of an organization who has had success in this area before. Sova, has real good size and has already added scoring to the Albany blueline. Sislo, a former captain at New Hampshire, bounced back from a poor freshman season to be one of the teams consistent scorers in the past three years. You have to like the fact that he suceeded there while on both the 1st/2nd scoring lines.

So that is a synopsis of the NCAA Free Agent market thus far.  Thoughts?  Anyone you wished the Devils had signed instead of Sova or Sislo?  Do you think any more signings are on the horizon?  Care to guess on what Sislo might get in terms of a signing bonus?  Thanks for reading and sound off below!