No college action during the past week as there is a week off before the Frozen Four.  As the Wolverines get ready for the Frozen Four it's been mentioned in this THN article that Jon Merrill is likely to return to the program next year.  Merrill who seems to win a new award every week was also named the top defenseman for Michigan this year at the team awards late last week.

If you have a free 4 minutes here is a video of defenseman Brandon Burlon commenting on a number of topics as he returns to the ice after dealing with an illness that knocked him out of the past few games.  The noticeably thinner Burlon should be ready to play in the Frozen Four this weekend. 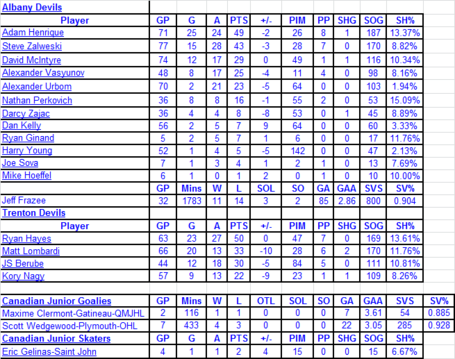 We have some new entries on the Albany stat list.  ECHL 2nd Team All Star Ryan Ginand, Joe Sova and Mike Hoeffel.  Sova has 4 points in 7 games and is scoring at a Matt Taormina like pace so far in his AHL career.  Adam Henrique has 4 games left to make a push for 30 goals.  Will take a big effort to get there, but I am hopeful he can do it.  With 4 games left on the season I am hopeful that Albany is able to stay out of last place in the Eastern Conference.  They are currently 13th with a chance to get up to 11th overall.  They still would not be a playoff contender but at least there is some pride to finishing the season strong.  The ECHL season has ended and the Trenton Devils came in last overall in the Eastern Conference with a 27-37-2-6 record.

In the Q, Eric Gelinas and his Sea Dogs begin their quarterfinal series against Victoriaville on Friday April 8th.  Gatineau will play Sean Couturier and Drummondville in their quarterfinal series which also begins Friday.  Maxime Clermont saw action in the opening round series in a relief effort and a game in which he started.  It will be interesting to see the goaltending rotation for Gatineau and if the team believes Clermont has bounced back from his late season funk.

As our friends on the Jersey Shore might say....Scott Wedgewood pulled a robbery on Kitchener.   Despite dealing with a barrage of shots over the seven game series Wedgewood propelled Plymouth to an upset 4-3 series win over the highly talented Rangers.  Top prospects Gabriel Landeskog and Ryan Murphy get a little extra time to prepare for the NHL draft combine.  Wedgewood faced about 44 shots per game and came out of the series with a steller .928 save percentage.  Great work by Wedgewood to steal this series for the Whalers.  They will now move on to play a rested Owen Sound Attack team who was the top ranked squad in the OHL Western Conference.  Can Wedgewood pull off another robbery?

I have updated the table above to only include playoff data (for those players in leagues with playoffs).  Even though Kitchener has been eliminated from the OHL playoffs there is still plently of information to read out there on the two top prospects the team has.  You can view a great profile on Kitchener defenseman Ryan Murphy here.  Mike Morreale of NHL.com has had some great blog posts during the recent Central Scouting meetings and has profiles/discussions on some of the top guys out there.  You can link to his blog/articles here.  All of the posts are worth a read.  From Joel Armia to the top North American skaters Morreale has a ton of information available.

The Devils do not currently have their own 2nd or 3rd round pick in the upcoming draft but they still have rights to the Dallas Stars 3rd round pick.  With Dallas quickly falling out of playoff contention it is likely that the 3rd round pick owed to the Devils would be pick #72 overall.  This accounts for the fact that the Devils pick in that round is just 'gone' so everyone moves up a slot.  Of course if the Stars should re-sign Jamie Langenbrunner before the draft that pick would become a 2nd round pick.  That pick would likely be #43 overall.