Patrik Elias had a great night on Friday, recording 3 of the Devils 4 goals and continuing his dominance over the Flyers. One of the big goals on the night was his shorthanded goal, where the Devils were able to get a 2-on-1 break. Brian Rolston and Elias did a nice job excecuting, but the Flyers didn't do a great job on defense. I'm going to break down what happened during the goal to see who did what right and who did what wrong.

First off, The Video (for those who didn't see the goal)

I plan on analyzing this frame by frame, and I will skip frames if necessary. Now, on with the review!

According to NHL.com's game summary, the following players were on the ice at the time: 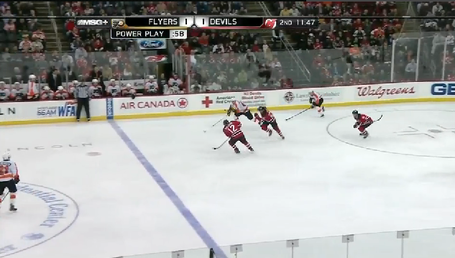 The play starts here. Elias took the puck off the stick of Andrej Meszaros (the Flyer in the middle), and Rolston gets to it before anyone else. Elias goes to the left side, as Rolston is taking the puck up the right side. The other two Flyers on the screen are James Van Riemsdyk (at center ice) and Danny Briere. Andy Greene also looks like he might join in on the rush as the trailer and scoop up any potential rebounds. Leach, Giroux and Carter are all off screen at the moment. 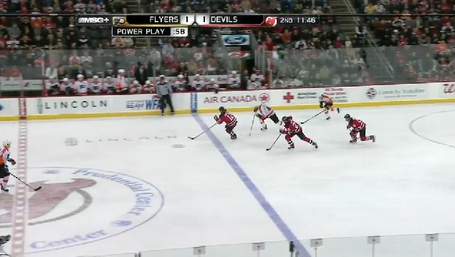 As you can see here, the three Devils (Rolston, Elias and Greene) are quickly moving up ice. Meszaros and Briere are trying to catch up, though Briere will have a lot of work to do if he wants to catch up. Van Riemsdyk is still at center ice, as he has to defend. 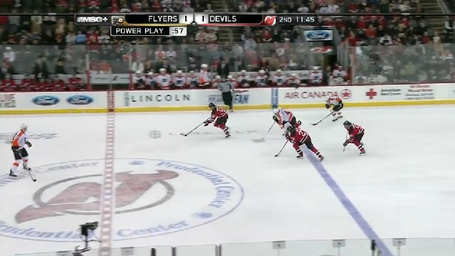 This frame shows Rolston leading the pack. This frame is important because Meszaros has to keep up with Elias, as Van Riemsdyk's man right now is Rolston. 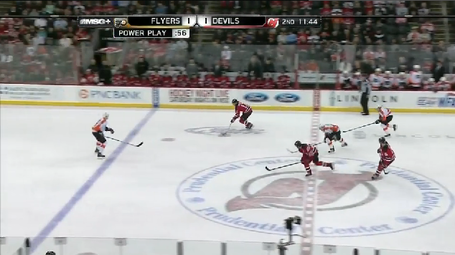 I skipped a few frames ahead because those frames were just Rolston carrying the puck through the neutral zone. Right now, Rolston's almost reached van Riemsdyk, who's still on him. Elias has out-skated Meszaros, and now it looks like it's a 2 on 1 with a forward on defense. It's a bad situation for the Flyers right now. As for Briere and Greene, Greene is heading to Elias' left, while Briere is trying to catch up to Rolston. 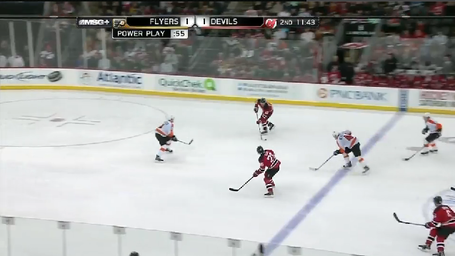 Again, I skipped a few frames ahead, because the few frames in between was Rolston skating with the puck. As you can see here, Elias is wide open, and Meszaros has a chance of catching him. Greene looks like he might be going for a change right now. Rolston is getting ready to either shoot or pass, while I think Van Riemsdyk is expecting Rolston to shoot here. 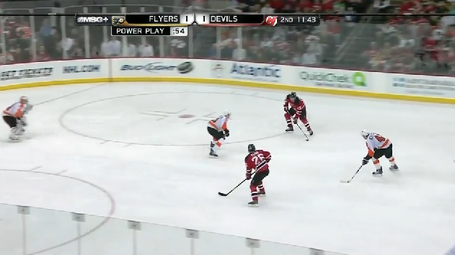 Briere and Greene are both out of the frame here. Meszaros looks like he's too far back to do anything. Rolston sees Elias to his left, and now he's thinking "pass". Van Reimsdyk is fully committed to Rolston right now. I don't think he noticed Elias, but right now if he can stop Rolston's pass the shorthanded chance might be neutralized. 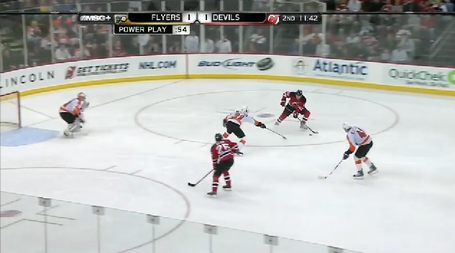 Now, here's the moment of truth- Van Riemsdyk has completely committed to Rolston, and is trying to poke the puck off of Rolston's stick. Rolston on the other hand, is readying the pass for a wide open Elias. Meszaros has no chance of reaching Elias now. 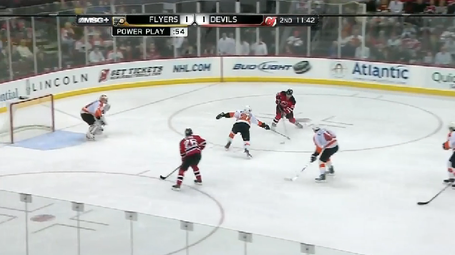 Unfortunately, van Riemsdyk wasn't able to stop Rolston, as Rolston is able to get the pass off successfully. 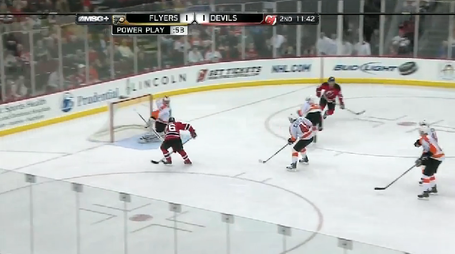 Elias has received the pass now, and all he needs to do is get it past Boucher. Boucher's got to go side-to-side here to stop the puck, and from the picture, you can tell what happens next... 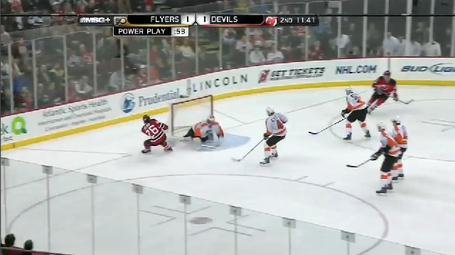 Patrik Elias scores a shorthanded goal, with 4 disappointed Flyers and a smug Brian Rolston looking on.

Some thoughts and notes on the play:

-Good execution by the Devils here. Rolston was able to get the attention of Boucher and Van Riemsdyk when he entered the Flyers zone, leaving Elias wide open. Elias did what he had to do when he got the puck.

- Andrej Meszaros looked like he was skating with cement bricks tied to his feet, as Elias easily outskated him.  This was due to the Flyers PP unit being out there for a good minute, which might have explained why Meszaros and all the other Flyers weren't able to keep up with a relatively fresh PK unit sent out by the Devils.

- van Riemsdyk did a pretty good job of playing Rolston. If it was a 1-on-1, van Riemsdyk would've won that battle. If he tried to cover Elias, Rolston would've been able to get a shot off himself- not nearly as good a shot that Elias had, but still a shot on goal that could've gone in.

Conclusions: The Devils executed a nice play against a tired group of players. If the same play happened earlier in the powerplay, maybe Meszaros would've caught up to Elias and stopped him from getting a good shot on goal. Or not.