2011 Offseason: Can the Devils Replace Andy Greene From Within? Part 3 - Scoring & PDO

Share All sharing options for: 2011 Offseason: Can the Devils Replace Andy Greene From Within? Part 3 - Scoring & PDO

One of the biggest questions the New Jersey Devils will have to deal with in this coming offseason is figuring out what to do with Andy Greene.  The 28-year old defenseman is in line to get raise of sorts this summer.  With the Devils' own cap issues, retaining him or signing a UFA defenseman in replacement may not be the wisest of moves.  Therefore, it's important to ask the question of whether the Devils can really replace Greene from within.

In Part 1, I looked at the 5-on-5 on-ice and off-ice stats for Greene and nine other Devils defenseman from last season to see how stacked up.  He didn't look too good compared to his teammates.  In Part 2, I focused on Corsi: relative to quality of competition, relative to quality teammates, adjusted for zone starts, and just straight up on-ice Corsi.  Again, Greene was not high up any of the groups.  The underlying numbers at 5-on-5 in both posts suggest that Greene is replaceable.

Today, I want to take a short look at scoring and PDO.  While production shouldn't be taken as the only way to measure a player's effectiveness, especially a defenseman, it can't be ignored.  After all, if we're expecting someone to be a two-way defenseman or an offensive defenseman, then there has to be some level of production achieved.  I'm also including PDO to highlight the on-ice shooting percentage and save percentage for each player at 5-on-5.  PDO tends to regress to a player's true mean over time, and for a team it's usually around 10000.  So those below 1000 suggests that the player may have suffered from some bad luck.  Unsurprisingly, most of the Devils defense was on the wrong side of this value in this past season.   Both of this will come after the jump. 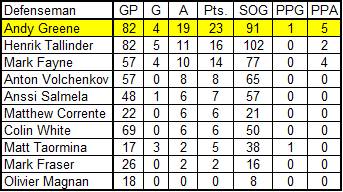 This is where Greene does sparkle on the Devils, outside of having a high time-on-ice per 60 rate at 5-on-5.  He's the leader on the blueline in total assists and total points; and just behind Henrik Tallinder in goals and shots on net.  The power play production is just bad all around, but again, Greene leads it here.  (Incidentally, Tallinder had a shorthanded goal and Colin White had a short handed assist.  Meaning: what you see here is mostly even strength - and low.)

To be fair, 23 points is not a lot in an 82-game season. However, 23 points would be a career high for any of the other nine defenseman on this list.  Henrik Tallinder's career high is 21; Colin White's high is 20; and Anton Volchenkov's high is 19.   To use a phrase: In the valley of the blind, the man with one eye is king.   Greene's got one eye, at least. 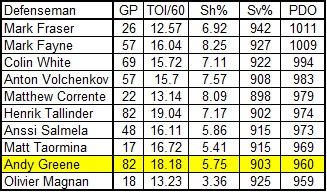 Greene's near the bottom of the list and this is actually a very good thing for him.  What this tells me is that Greene has been very unfortunate last season, more so than his teammates.   He played a lot of minutes and in playing them, his team struggled mightily to score and the goaltending behind him wasn't all that great.  I wouldn't fault Greene for this, nor would I .  Players alone won't have a large impact on a team's shooting percentage, as Tyler Dellow found back in 2008.  He might have some contribution to that low save percentage by way of bad defending leading to goals against; but that will show up as I review the goals against from this past season.  I'm a little skeptical of that though.  Either way, whoever signs Greene is going to benefit from both values regressing upwards. If only because I highly doubt the team he'll be on in 2011-12 will be so bad at shooting that it will be below 6%.   It wasn't the case in the last two seasons.

In the bigger picture, I'd keep an eye on Fayne.  When he was out there, the goaltending was strong and the Devils actually shot at a percentage around league average.   A PDO 1009 isn't particularly high, but since Fayne is coming off a rookie season, we really don't know his true mean.  Hopefully 2011-12 won't lead to a gigantic drop off.  Still, it may be an indication that even if he gets even better fortune in the future, Fayne may not yield a higher rate of points.  That will likely come with further development and, more importantly, more minutes and games.

Among other areas, production is the biggest concern I currently have over replacing Greene from within. Who will honestly step up to provide similar or better points?  Can we expect Mark Fayne, who's coming off a rookie season, to do so? Can we realistically hope Henrik Tallinder can hit a career high?  Can we expect Matt Taormina and Anssi Salmela to chip in, should they be in the picture next season?  My current answer to all of these questions is a worrisome, "I don't know."

At the same time, I have to question whether or not the cause for the defensemen putting up paltry points last season was that the entire team struggled to score goals last season. They weren't good on the power play, and the team were miserable shooters at 5-on-5.    If the forwards aren't scoring, then it's going to be difficult for the defensemen to pick up the slack and/or rack up assists.  If the power play unit is going with five forwards, then defensemen can't benefit in those situations.   They certainly couldn't last season.

Then again, that may have been intentional.  The current group of defensemen won't be confused as being serious two-way threats.  As noted earlier, Tallinder, White, and Volchenkov have never been successful in production.  The rest of the group aside from Greene are young unknowns (Fayne, Taormina) or largely nonfactors on offense (Matthew Corrente, Mark Fraser, Olivier Magnan). It could be that last season's power play featured so many forwards because none of the defenders had the skills or mindset on the attack as a fourth or fifth forward would in the eyes of the coaches. It's a chicken-or-the-egg scenario in my opinion.

All the same, if the team as a whole shot better, then everyone's production would have been boosted by some degree.  As the PDO chart showed, the Devils were below average or worse in terms of 5-on-5 shooting percentage.  The goaltending could have been better for some (e.g. Greene, Tallinder, Corrente, Volchenkov); but it's that shooting percentage that really sticks out for not being all that high. While it's out of his control, luck may lead to a better value next season for Greene - which may coincide with a more productive season, something the Devils blueline really miss if Greene walks.

What do you make of the team's scoring?  Surprised to see the PDO so low for Greene?  Please leave your thoughts on Greene, the other 9 Devils defenseman, and the larger question asked in the comments.  Part 4 will focus on special teams, though that may not come for a few days.  All the same, thanks for reading.