2011 NHL Draft: A Look at Adam Larsson and His Defensive Teammates

Share All sharing options for: 2011 NHL Draft: A Look at Adam Larsson and His Defensive Teammates

With the 2011 NHL Draft quickly approaching you are going to hear the 'higher competition/plays with men' factors mentioned numerous, numerous times.  With Adam Larsson, Mika Zibanejad, and Joel Arnia all projected to go in the top half of the first round there will be discussions as to why their stats pale in comparison to their North American counterparts and the fact that they all play in professional leagues will be brought up, and rightfully so.

The statistical comparison from a North American player to a European player is often like night and day. And while I should know better I sometimes like to see the player with the gaudy stats selected by the Devils.  I recall watching the 2009 draft and being disappointed the Devils traded up for Jacob Josefson with Kyle Palmieri still on the board.  Looking at Josefson's stats you weren't impressed until you realized the level of competition he was playing against at such a young age.

In the past few years there have been varying amounts of players selected in the first round of the draft from the European Elite Leagues.  There were 3 in 2008, 6 in 2009 and 2 in 2010.  Depending on which mock draft you look at today, there are likely 4 players (Larsson, Zibanejad, Armia, and Jonas Brodin) who will be selected from a European Elite League in the 2011 first round. Larsson is the top ranked and my primary focus here.

Since we do not have advanced stats available for the Swedish Elite League, I looked through all the available information I could find to try to compare Larsson with his defensive peers in the SEL, especially his own Skelleftea team which has two top prospects (David Rundblad and Tim Erixon).  After the jump I will look at the ice time of all defenders on Larsson's Swedish team and take a closer look at how Larsson's production and time on ice compare to Rundblad and Erixon this past season and in prior seasons.

If you are tired of hearing me opine about draft prospects you can blame this article on Mike Morreale of NHL.com.  In the latest episode of Talking Red (available for listening/download here) Mike seems very high on Larsson.  In the mock draft Morreale posted on NHL.com he has Larsson going to the Florida Panthers with pick #3 and I get the sense that he thinks that Larsson should be #1 overall.  When I asked Mike if the Devils could possibly pass up Larsson if he was available at pick #4 he was very quick to answer 'No'.

So I was intrigued.  I had read up about Larsson before the mock draft I put together last week, read a good case for him to be the #1 overall pick in a Derek Zona article on Copper & Blue, and back in January even said that he should be the Devils top choice if they should remain as bad as they were.

After talking with Mike, I felt the need to dive into information I could find on Larsson and see if it told us anything.

The SEL site, while it doesn't have the Corsi or other advanced stats that we would like to utilize, does have time on ice and shots for, which are helpful when comparing one player to another.  And, as I mentioned above, the fact that Larsson is teammates with Rundblad and Erixon help put his ice time into a better perspective.

In case you were unfamiliar with either player, Rundblad is ranked #6 by HockeysFuture in their latest top 50 list for all current NHL prospects while Erixon is listed by HockeysFuture as the Flames top prospect.

To try and get a better sense of Erixon's development I reached out to Talking Red and In Lou We Trust's friend Jared Ramsden of HockeysFuture.  In an email exchange with Jared (he covers the Devils for HF and has good knowledge of the Flames system since he is local to the area) I asked him to compare Devils prospect Jon Merrill and Erixon:

I think Merrill is going to bring a little more offense to the table than Erixson will. I see Erixson as a top notch 3-4, where as I see Merrill as a more dynamic 1 or 2 with the ability to QB a powerplay.

So, Rundblad seems to be a stud and Erixon an Alexander Urbom/Brandon Burlon type of prospect.

Taking that into account I have listed the ice times, point production and shots on goal for all Skelleftea players below.  I have included both regular season and playoff stats.

What can we gather from this?  A few things:

Larsson's regular season 18:44 time on ice TOI is a bit deceptive as he had a few games at the beginning of the year in which he played 9-12 minutes.  Not sure why that was the case, but his time increased as the season progressed. As an example when he came back to the team from the World Junior Championship (and a groin injury), he played about 23 minutes in his return.

Erixon and Larsson seemed to be the team's top 'defensive' pairing in the playoffs.  Scanning a number of boxscores it seems that the only time Rundblad was on the ice for more time than either Erixon or Larsson was when Skelleftea was down by a few goals and needed his offensive prowess to help jumpstart things. 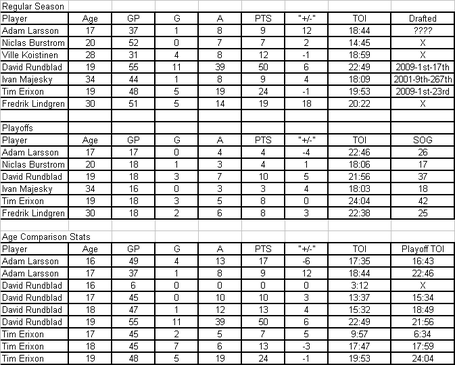 Do his numbers jump out at you yet?  They shouldn't, but when you compare Larsson's performance in the past two seasons when he was 16/17 to Rundblad and Erixon you can see how advanced defensively he seems to be.  At age 16 Larsson was on the ice for roughly 17 minutes a game in the regular season/playoffs.  Rundblad/Erixon didn't get those type of minutes until they were both 18 years old.  This year at age 17 Larsson was playing almost 23 minutes per playoff game (for a team that went to the finals).  Rundblad/Erixon also played a similar amount of minutes...at age 19.

Should Larsson's drop in points be concerning? No.  Per Mike Morreale here it would seem that Larsson was asked to do more defensively and complement Erixon than show his offensive skills.

A relative who's who of top defensive prospects, no?  And yes, Larsson is a year to two years younger than most of them.

In a nutshell all of this information means that Larsson is very, very good for his age and the responsibility/ice-time he has received in the SEL should speak to the ability many believe he has. Does this mean I have now flipped to Team Larsson from Team Couturier?  No, I still would prefer the Devils land Sean Couturier but Larsson would make for one hell of a consolation price (or would Couturier be the consolation prize??). This is one of those years I wish the Devils had more assets to make a move and jump up and get another top pick!