After the jump you will find statistical updates on Devils prospects from the Canadian Junior Leagues and stats for some of the top 2011 Draft Prospects.  I will also provide the updated listing of college free agents who have signed NHL contracts.

And then there were two.  Only Maxime Clermont and Eric Gelinas remain playing at this time.  Saint John leads their semi-final series over the Lewiston MAINEiacs 2-0.  Gelinas has 1 assist, 9 shots, 14 hits and is a plus 1 over the two games.  Clermont, now back as the top netminder at Gatineau, and the Olympiques are tied 1-1 with the Quebec Remparts.  I am rooting for Gatineau to make it past Quebec so that we can all see how Clermont does vs. the Sea Dogs scoring machine in a championship series. 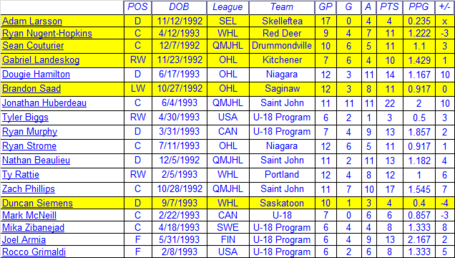 No new entries above but I have amended some stats for players who played in the IIHF under-18 tournament that concluded this past Sunday. Mika Zibanejad had a terrific tournament and probably pumped up his draft stock a bit with his performance.   Top players in the tournament were listed here.  Top players by team are listed here.  Over at BruinsDraftWatch blog site, Kirk goes over the performance of some players and how those performances made them risers, fallers or sleepers for the 2011 draft.

Fans of the Saint John Sea Dogs had a scare over the weekend when Jonathan Huberdeau took a hit from behind and remained down, face first, on the ice for a few minutes after being hit.  He would later return to the game, so he seems to be OK.  You can view a recap of the game and the video of the hit here at the Station Nation site.  One thing I noticed after the hit was Nathan Beaulieu going after the player who hit Huberdeau and then going over to see if Huberdeau was OK.  I like to see things like that.  Beaulieu, who has the 'offensive-defenseman' label attached to him, showed me a lot in that short sequence.

Also, for some fun prospect talk with Mike Morreale of NHL.com check out the latest Talking Red podcast.

Mike Morreale gives us who he thinks the Devils will take and who they should not pass up if he becomes available.

A discussion on some of the defenseman (other than Adam Larsson) who Morreale thinks could go high in the draft.  One of whom is a big fan of a former Devil!

Me working in a  'Chris Pronger Steals Pucks' joke. 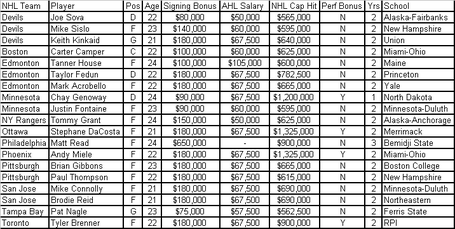 I've updated the NCAA FA Tracker above with the details for Keith Kinkaid's contract.  Kinkaid received the maximum amount of money he could via a signing bonus/AHL salary.  He also would have a $640,000 cap hit at the NHL level, which is likely going to end up as a higher hit than Jeff Frazee will have should he be tendered a contract.  That inherently doesn't mean anything substantial (I am not saying Kinkaid is slated to be ahead of Frazee on any depth charts) I just find it interesting.

In terms of real money the Devils have spent -at minimum-$577,500 to acquire the services of Joe Sova, Mike Sislo and Kinkaid over the next two seasons.  That is a small price to pay to add quality depth to each position at the AHL and hopefully NHL level.

I still expect some other college players (Scotter Vaughan, Mike Montgomery, and Bryan Hogan) to sign elsewhere so I will continue to add this list to the stats post.

Thanks for reading and sound off with any comments or questions below!