Basically, Greene didn't stand out, but he wasn't in the dregs among UFA defensemen except in a few stats like quality of teammates and team on-ice shooting percentage.  As enlightening as all of it is; I also want to point how Greene stacked up among the group in terms of on-ice and off-ice stats, obtained from Behind the Net. Basically, what happened with the team when they were on the ice.  Since this group has a TOI/60 of 15 or better, I don't think that the effect between off-ice and on-ice shouldn't be seen as negligible.   All the same, let's see whether Greene stands out better by these stats.

As with Part 1, please set your viewing to "Wide" to see all of both charts after the jump.  More importantly, if you haven't read Part 1 yet, please do so first before continuing with Part 2.

The following chart showcases the on-ice and off-ice rates for goals for per 60 minutes (GF/60) and shots for per 60 minutes (SF/60).   I've sorted it by the difference in SF/60 to highlight the change for their respective team when they came on the ice.  Goals aren't as controllable as shots, and so I feel the difference in SF/60 will showcase who has a more positive offensive effect on their team. If we're considering an offensive-minded defenseman, we should hope it's positive and large as possible. 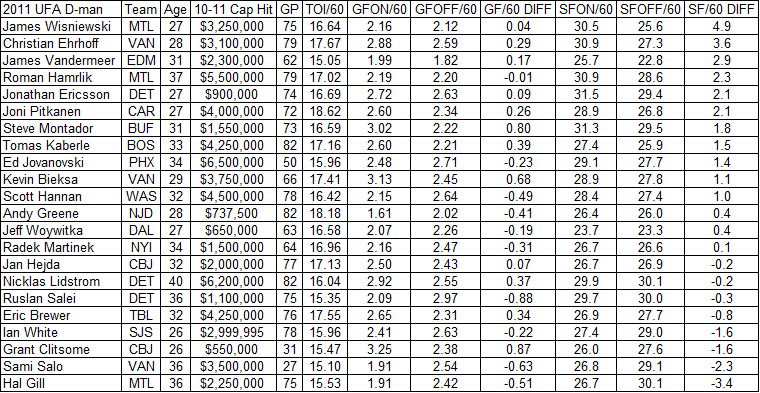 Greene is tied for twelfth on this list with Jeff Woywitka.  The difference for Greene wasn't all that high on it's own and in comparison to other UFA defensemen, it's further justified.  As you would expect, most of the defensemen with higher difference values are offensive or two-way defensemen: James Wisniewski, Christian Ehrhoff, Roman Hamrlik, and Joni Pitkanen.   The positive side of this difference has a couple defensive-minded defensemen in Ed Jovanovski and Scott Hannan.

There are some surprises in this calculated stat.  Not Hal Gill, that he's at the bottom shouldn't be much of a surprise.  However, seeing Nicklas Lidstrom and Ian White are considering in Part 1 they were found to have positive Corsi values.   Likewise, it's weird seeing James Vandermeer so high when he had one of the worst Corsi values among the group of 22.   A positive change in SF/60 when a player gets on the ice is certainly welcome, but it alone doesn't say it all.

This chart is similar to the last one, except it's organized by shots against per 60 minutes (SA/60).  In my opinion, I would want any defenseman who plays significant minutes to have a positive difference on this stat when they come on the ice.  It belies whether the player is ultimately effective in their own end.   Goals against can be the fault of someone else or just a good play; but shot prevention should be the main goal of a defenseman. 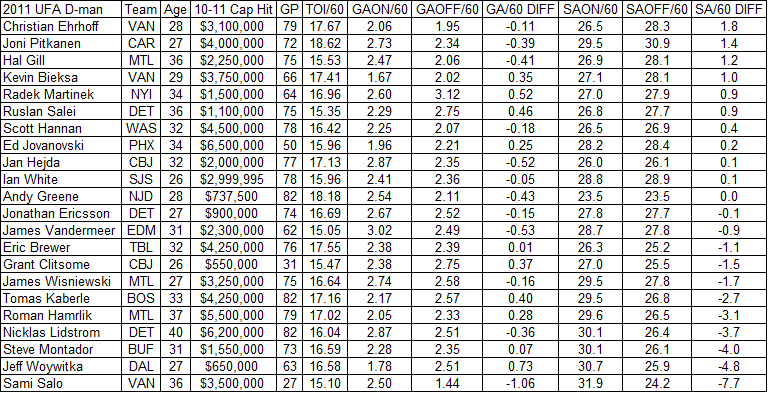 Once again, Greene's right in the middle with his no-change on SA/60.  Ten defensemen have had positive changes; eleven have had negative changes.   Right at the top are a mix of defensemen.  Christian Ehrhoff leads the group, with the more-TOI/60-than-Greene Pitkanen, and they are followed by Gill, Kevin Bieksa, Radek Martinek, and Ruslan Salei.

At the bottom are a few surprising names.  Once again, Nicklas Lidstrom is on the wrong side of this calculated stat.  He's still better off than Steve Montador, Woywitka, and Sami Salo (and his GA/60 difference of -1.06 suggests to me opponents loved it when he was out there); though worse off than Tomas Kaberle and Hamrlik.   Between this and the negative difference in SF/60, does this mean Lidstrom isn't "all that and a bag of chips" in his own end anymore?

I don't think so due to context. This context comes from Part 1: quality of competition. Recall that Lidstrom had the toughest competition out of all 22 UFA defensemen.  While he came out ahead in Corsi and adjusted Corsi, the team wasn't always as fortunate. Therefore, the shooting rates both for and against going in the wrong direction isn't as troublesome as it looks because we know Lidstrom was facing off against the best the opposition has to offer.  The same can't be said for Jeff Woywitka, for example, who went up against weak competition and didn't do so well.

Even by context though, Greene's right in the middle of the group again when it comes to the difference in on-ice and off-ice stats.   Not great, but not at all bad either.   As I said in Part 1, this can be seen both as a negative (he didn't stand out and so he shouldn't been seen as a prime target) or a positive (he's not bringing up the rear in the important stats, combined with his age and last deal being so cheap, he could have many suitors this summer).

So what could Greene look for?  In the comments to Part 1, Tom brought up the comparable of Trevor Daley.  While I don't think Greene will command nearly as much, it could be used as a reference point.  Not to make $3.3 million like Daley will next season, who got his deal a little younger; but perhaps a little less. The average cap hit of all 22 UFA defensemen here is just under $3 million and by way of Greene being middle-of-the-road within this group, an argument can be made to get about that.   Should the Devils want to keep him, they need to hope that familiarity with the organization and security in terms of a roster spot is enough to knock down his price.  They would also do well to clear up cap space, too; though, they should do that regardless.

By the same token, I have yet to see a really great option for the Devils in terms of picking up a UFA defenseman in this group to replace Greene.  The Devils will either have to roll the dice on someone coming off a cheap deal like Jonathan Ericsson or Woywitka (or someone who's played less minutes) and hope they can play a bigger role; sign a veteran on the "cheap" and hope they still have enough left in the tank to contribute; or be willing to splash the cash for bigger name like Wisniewski to get that vaunted "offensive defenseman."  The third way isn't viable due to a lack of cap space. The first way may be cheaper but even if you see Greene as mediocre, then you run the risk of signing someone less than mediocre  and wasting that space.  Speaking of wasting that space, that's the big concern in the second way - just look at Brian Rolston for a forward-version of that fear.

There is a fourth way and that is to let Greene walk and just replace from within. But let's discuss that on Thursday.  In the meantime, were you surprised to see how Greene ranked among the UFA defensemen by either calculated stat?  What do you think Greene can command on the open market? Who do you think the Devils should target among this group? Please leave your answers and other thoughts about Greene and the other 21 UFA defensemen in the comments. Thanks for reading.