Andy Greene is the biggest unrestricted free agent skater on the New Jersey Devils in this coming summer.  A few days ago, I took a closer look at his underlying numbers in his last four seasons as a Devil.  While he has played a lot in the last two seasons, which means the coaches think he's been great, his other numbers were not as spectacular. Especially in this past season, where he suffered along with the rest of the team under John MacLean and had to carry Anssi Salmela for most the Jacques Lemaire-portion of the season.   While Greene can handle 22+ minute nights, he didn't exactly excel; suggesting that he should play less wherever he goes and that most teams aren't likely

However, I think Greene's underlying numbers at 5-on-5 need to be compared with other impending UFA defensemen for this summer.  Does Greene stand out among the rest?  If not, will he remain a "bargain" signing of sorts?  Moreover, if Greene does decide to sign elsewhere, then who on the market may be available?  I went to Behind the Net and sorted out all defensemen who played at least 20 games and played at least 15 minutes at 5-on-5 (TOI/60); and cross-referenced that list with CapGeek to filter out only UFA defensemen.  After the jump, I combined the results from both sources into a series of charts to see where Greene stands out.  This part will focus on quality of competition and Corsi; tomorrow I'll go over on-ice/off-ice stats.   (Note: Please set your viewing to wide before continuing, or else you will not see the entire chart.)

22 defensemen, Greene included, played at least 20 games last season and had a TOI/60 of 15 or better. Here they are, complete with their basic stat line (all situations) and cap hit from last season.  Incidentally, I used 15 TOI/60 as my baseline to sort out defensemen who have played "top 4" minutes or so. Regardless of games,152 defensemen played at least 15 TOI/60 according to Behind the Net last season - so that will even go 5 players deep for some teams.  The games played baseline of 20 filters out those who only played as a call up (e.g. Shawn Belle) or injured for most of the season (e.g. Andrei Markov) 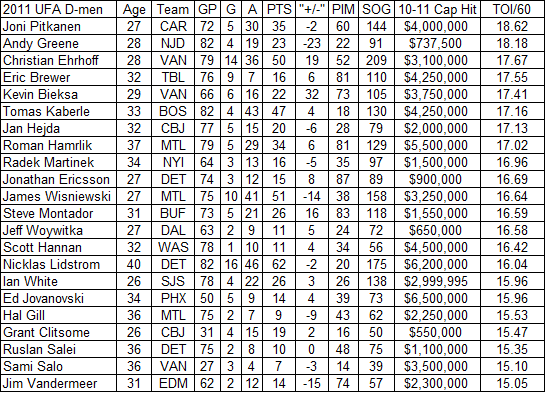 The 22 UFA Defensemen by Corsi Relative to Quality of Competition

From Behind the Net, here are the quality of competition, quality of teammates, and Corsi relative to those two values for all 22 UFA defensemen, including Andy Greene.  I organized it by Corsi Relative to Quality of Competition (Corsi Rel QoC) to see who's successful at getting the puck forward with respect to the competition they face.  After all, a puck-moving defensemen should be able to do just that, right?

There's so much to conclude from this chart alone. For example, this highlights what Sami Salo brings to the table for the Vancouver Canucks when he was healthy, while "exposing" Christian Ehrhoff's season beyond his gaudy point totals at the same time.  Whoever signs Ehrhoff may want to consider putting him up against weaker competition or hope he gets better (and later on in this post, you'll see what I mean).

Greene's in the middle, sitting at 12th out of all 22.  Those at the top are particularly impressive as they have faced tough competition and came out ahead.  Those players should have their agents know these numbers and consequentially demand big money.   There are also have some defensemen who struggled against their competition - and not very good competition as it appears by their QualComp.   Some of that can be explained away by other factors, like if the team itself was constantly beaten on in possession (James Vandermeer on Edmonton) or if the player didn't play with high quality teammates (Ian White, Ruslan Salei).

Speaking of teammates, you'll notice that a lot of these UFA defensemen have positive quality of teammate values.  In fact, all but 5 of them have positive Corsi relative to quality of teammates (Corsi Rel QoC).  Since they play a lot of minutes, they're usually out there with their team's best forwards and so benefit from that.   However, 4 out of the 5 that have negative Corsi Rel QoT (Steve Montador, Greene, Hal Gill, Eric Brewer, and Lidstrom) have negative quality of teammates.  This could be because while they are playing a significant amount of time at 5-on-5, they're not doing so with the team's best forwards.  Greene, for example, got lots of minutes but often didn't get matched with the team's first line.  He, along with Salmela, will usually be out there with a forward line that wasn't always as great at possession.

The only anomaly here is Lidstrom, who destroys his competition (best Corsi Rel QoC) and yet suffers relative to his teammates.  Strange.

Enough about competition, though.  What about Corsi straight-up?  Who's been the most successful defenseman at getting the puck forward when they are on the ice among impending UFAs?

The 22 UFA Defensemen by Adjusted Corsi per 60 Minutes

Most of the numbers here come directly from Behind the Net.  However, I've organized this chart by adjusted Corsi per 60 minutes.  13 of the 22 all had favorable zone starts more often than not.  Christian Ehrhoff starting on offense 61.5% of the time made it real easy for him to rack up Corsi, while Eric Brewer had a far harder time getting forward since he only had 44% offensive zone starts. To minimize that for Corsi purposes, I had to take that into account.  Following JLikens' findings at Objective NHL of how to adjust Corsi for zone start, I calculated the adjusted on-ice Corsi per 60 minutes for all 22 defensemen. 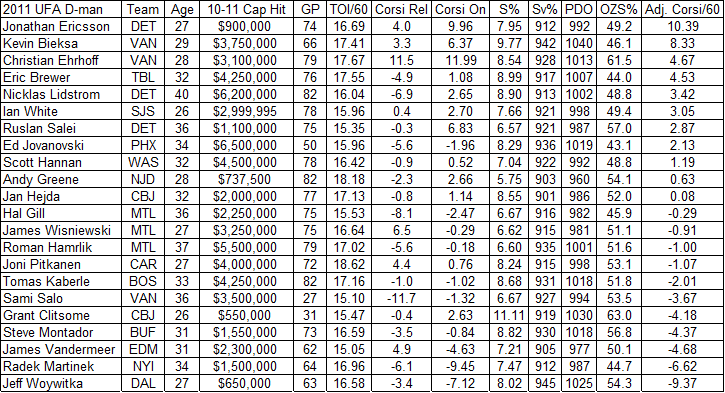 Christian Ehrhoff manages to stay ahead of Eric Brewer, but not by much.

Anyway, Greene is 10th on this list.   Not bad, but not all that good.  Johnathan Ericsson didn't face tough competition, didn't do well relative to them, but in terms of adjusted Corsi/60, he's at the top of the list.  Kevin Bieksa also stands out with a very good rate here.  On the opposite end, you have Radek Martinek and Jeff Woywitka. While Martinek had a very low rate to begin with while also starting a lot in his own end; Woywitka had a much better offensive zone start percentage and still was going the wrong direction more often than not.  I'd stay away from Woywitka, at a minimum; if not the whole group below Salo.

One additional note, I included PDO just to highlight the fortune or misfortune these guys had throughout the season.  Generally, PDO tends to regress towards a baseline of 1000 (shooting percentage + save percentage), so a defender here with a high value may suffer the next season.  For example, I highly doubt Grant Clitsome's team is going to shoot as high as 11.11% at 5-on-5 when he's on the ice next season. Likewise, when Greene's on the ice, the team's shooting percentage of 5.75% has no where to go but up for next season; provided he isn't hexed or something weird like that.

Overall, these are a lot of numbers and it's just a fraction of what a GM has to consider when trying to sign a player or re-sign them.  That Greene's in the middle among the 22 UFA defensemen can be seen in two ways. The first is that Greene didn't really stand out and while he deserves a raise, it's not like it's going to be substantial. He didn't put up big points, he didn't destroy his competition, and his Corsi rate adjusted or otherwise isn't all that good.  The second is that while Greene didn't sparkle among the UFA class of defenders who played significant minutes who mostly made way more money than him, that he's not near the bottom by most stats is a positive. Therefore, several teams can look at Greene and figure they can get decent value for a player who's relatively young compared to other UFA defensemen.  He may not command big dollars like James Wisniewski might (his Corsi suggests otherwise, but his point totals may get someone to pay up), but he's not going to get passed over for some time like Mike Mottau was last summer.

As mentioned before the jump, I'll put up on-ice/off-ice numbers tomorrow.  Until then, what do you think about how Andy Greene compared with the other 21 UFA defensemen in this past season at 5-on-5?   Were you surprised to see that he wasn't in the bottom half in any of the charts; or was it more of what you expected?  Who on this list sticks out to you as a potential Greene replacement?  Please leave your answers and other thoughts about this point, Greene, and any of the other 21 UFA defensemen in 2010-11 in the comments. Thanks for reading.